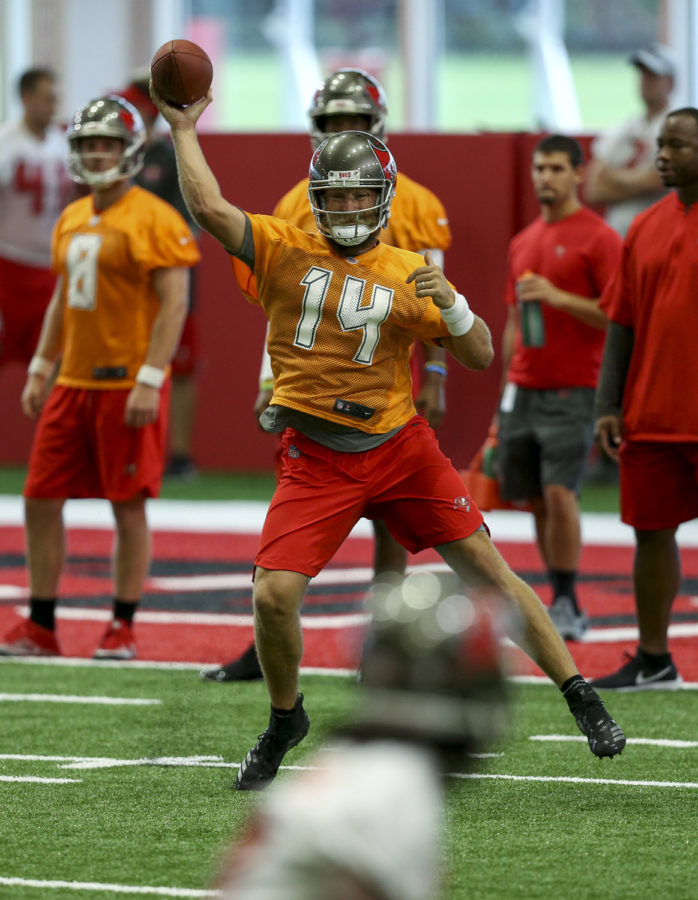 If you failed to find our waiver wire weekly picks from last week, don’t worry too much — we have a whole new slate of targets for you now. In Week 2, we saw six of our eight picks outscore their projections and we would have seen seven of eight if the Carolina Panthers’ tight end Ian Thomas hadn’t dropped a pass in the end zone. So if you find yourself scrambling for new faces in your fantasy lineup, look no further.

*The “%OWN” statistic — which denotes what percentage of fantasy leagues the player is owned in — is based on ESPN standard leagues from Sept. 17.

Do you believe in Fitzmagic yet? Ryan Fitzpatrick built off of his huge Week 1 with another 400-plus-yard and four-touchdown performance. If this doesn’t shock you enough, Fitzpatrick posted these monstrous statistics against two playoff teams from last season, including the defending Super Bowl champion Philadelphia Eagles. So hopefully the inviting matchup against the Pittsburgh Steelers this week finally gives Fitzpatrick the %OWN figure he deserves. What is most dangerous about Fitzpatrick is that he is playing completely loose and just having fun. Spending his career as a backup allows him to dodge expectations that usually build around starting quarterbacks and play with less pressure.

Blake Bortles seems to have found himself in a perfect system. Bortles is not going to blow anyone away in any one facet of the game, but he still succeeds by making the right decisions and getting the ball into the hands of his playmakers. That’s why offensive coordinator Nathaniel Hackett’s conservative “death by a thousand cuts” offense is the perfect system for Bortles to play in. The offense is run-heavy, but with running back Leonard Fournette dealing with a hamstring injury, it’s now taken to the air. Bortles threw for more than 375 yards and four touchdowns against the defending AFC champion New England Patriots. Look for Bortles to continue his success with a better matchup in Week 3 against the Tennessee Titans.

The 49ers’ backfield situation got extremely confusing when projected starter Jerick McKinnon went down with a torn ACL in the preseason. Matt Breida has been a popular fantasy name since McKinnon got hurt, but expect that popularity to increase even more very soon. The 49ers have basically gone with a running back by committee thus far, but if you watched last week’s game, Breida put fellow runner Alfred Morris on the back burner. The second-year pro rushed 11 times for more than 130 yards, including a 66-yard touchdown on a day when he set career highs in rushing and scrimmage yards. Breida may not become the 49ers’ workhorse next week, but it looks like he may capture that role soon — which will spike his %OWN.

Breida 67 yards to the 🏠 pic.twitter.com/6iIUv50oRI

With regular starter Joe Mixon sidelined for at least a couple of weeks after undergoing a procedure in his knee, Giovani Bernard is likely to be the face of the Cincinnati backfield for the time being. Last season, Cincinnati experienced a similar situation when Mixon was injured for three weeks and Bernard thrived in his absence. He compiled more than 200 rushing yards, 130 receiving yards and two touchdowns in his time as the starter last year. Bernard has a great skill set that will implicate him heavily in both the rushing game and passing attack for the next couple weeks.

It has been a tale of two weeks for Chargers receiver Mike Williams. In Week 1, he was targeted several times, catching five passes for 81 yards and was seemingly all over the field — except the end zone. In Week 2, Williams caught only two balls, but one was an impressive touchdown that he hauled in through traffic and contact. Williams is becoming more and more a part of the Chargers’ offense, which is growing into a dangerous unit in general. Los Angeles is generating a lot of buzz this year as a possible deep playoff team — and as the number two option in its passing arsenal, Williams should thrive.

Had it not been for an array of off-field issues, Antonio Callaway could have been drafted in the first round of the 2018 NFL Draft. Instead, the Browns took a shot on the former Florida Gator in the fourth round. In Week 2, Callaway reeled in a 47-yard touchdown, flashing his big-play potential. And now his role may expand even more — the Browns traded their former premier receiver Josh Gordon to the New England Patriots for a fifth-round draft choice Monday. With Gordon gone, the Browns need someone to step up and be the vertical threat that can stretch the field. Antonio Callaway is the man for the job.

One of the beneficiaries of Ryan Fitzpatrick’s hot start has been former first-round draft pick OJ Howard. Against the Philadelphia Eagles Sunday, Howard had three receptions for 96 yards and a touchdown. He’s an athletic pass catcher with a great blend of power and speed. He also draws a favorable matchup in Week 3 against a Steelers’ defense that allowed opposing Kansas City Chiefs’ tight end Travis Kelce to have a big game last week. If you’re still not convinced of Howard’s role, Tampa Bay’s other option at tight end, Cameron Brate, has not been targeted once all year to this point and played only 14 snaps to Howard’s 46 on Sunday.

After seeing his lofty expectations come crashing down in a failed marriage with the Detroit Lions, Eric Ebron may just have found a role with the Colts. Ebron now has two touchdowns in his first two games as a Colt, proving he may be carving out a role as quarterback Andrew Luck’s go-to guy in the red zone. Even though fellow tight end Jack Doyle had one more target last week, Ebron is sure his targets will see an uptick as he has the greater talent potential of the two options.