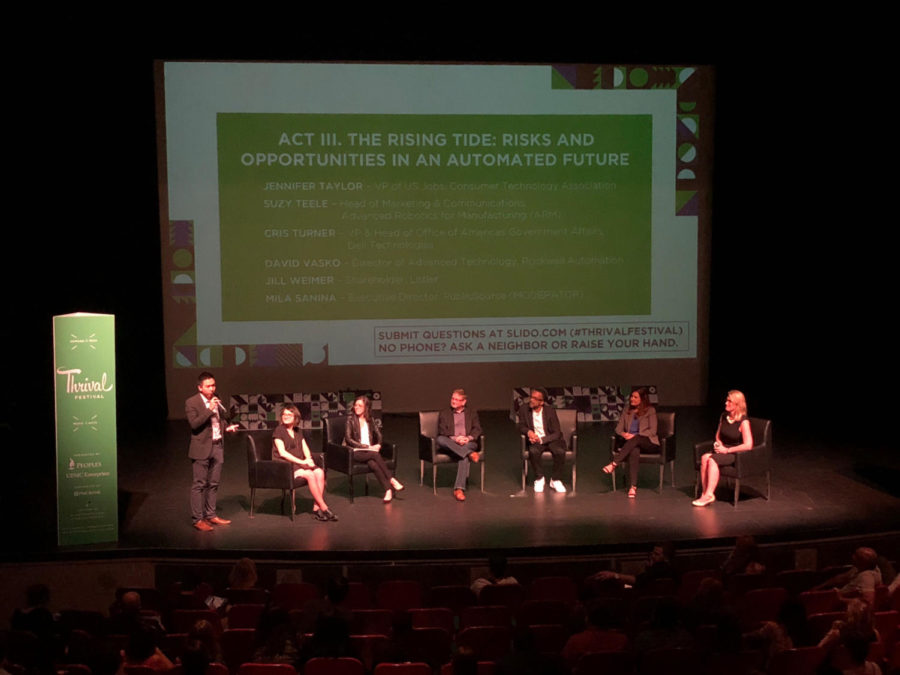 A technological symposium might not sound like the most interesting event, but when an EDM duo dressed in light-up suits hits the stage, that view is pretty easily challenged.

Thrival is an annual festival that explores the connections between people and important parts of their society — specifically technology and music. It is composed of two parts — Humans X Tech and Music X Arts — that follow the same theme. The theme this year is LIFE.CODE, and the festivities kicked off with the symposium.

Executive Producer and Director of Thrival Dan Law said that coming up with this year’s title and theme was a scientific process in itself.

“When we started asking the question of what makes us human, we said, ‘Well, maybe it’s our DNA, our mitochondria, or maybe it’s shared experience and the ability to empathize with one another,’” he said. “‘Or maybe it’s just the simple idea of contemplating your own death.’ So we said, ‘Okay, what’s the code of life?’ and that’s how we came up with LIFE.CODE.”

The Future of Work Symposium was part of the Humans X Tech section of Thrival, featuring three main presentations with smaller performances between each one.

The night started with a performance by Veserium. The duo consists of former engineers, Ray Li and Michael Ndubuisi, who decided to make their own performance technology for musical acts. The key element of their act was their light-up suits that changed color as they went through the motions of their dances. The duo’s performance of “Journey Through Time” had an intro that explained the suits, which then transitioned into “Wolves” by Selena Gomez.

After Veserium, Mayor Bill Peduto came onstage to give some opening remarks. He opened with some light humor in regards to how much cleaner Pittsburgh has become in recent years. He then spoke about how Pittsburgh is making a comeback as a city and how he envisions technology helping the City become more successful in the coming years.

“We need to measure, adapt, measure, adapt and then be able to have our City, 20 years from now, be the city that we want to see,” Peduto said.

Once Peduto left the stage, Act I began. This act featured President and CEO of the Heinz History Center, Andrew Masich, talking about Pittsburgh’s legacy of work. Masich went over the history of Pittsburgh and all of the unique and diverse accomplishments and inventions created here, like Heinz pickle pins.

After Act I, a snippet of the documentary “GAPPED” played for the audience. This documentary, made by Molten Media, discusses the generational trauma native Pittsburghers face due to gentrification. The clip shown talked about the cycle of poverty and how the economic system in Pittsburgh works for 70 percent of people, but leaves the other 30 percent stranded without help.

Act II, “Course Correction: Navigating Disruption with Education,” was a panel of speakers who talked about technology in education. The panel featured local educators like Aileen Owens, the director of technology at South Fayette School District, and business moguls like Rusty Justice, a managing member of Bit Source, among many others.

Max Dennison, executive director of Beta Builders, explored the subject of raising kids exclusively as generalists or specialists in this panel.

“I don’t know why we have to choose — they could be generalists up until maybe high school or until they find something they’re interested in, and then they could specialize from there. I would say be a generalist until you know what to do and how you want to impact the world,” he said.

Tommy Talbot — a guest who came all the way from Charlotte, North Carolina, to attend Thrival — was excited about the discussion of education.

“You can do whatever you want, especially if you’re in America. I mean, it’s just about getting up and making the right steps to complete your goals that you want to do,” he said. “We’ve got YouTube, free programs, technical schools — you don’t need a four-year degree nowadays. Technology and where we’re going is just amazing.”

A short scene from the play “Marjorie Prime,” opening in May 2019, was performed following the second act. Act III explored the risks and opportunities in an automated future. A new panel was introduced and they also answered questions sent in the online forum.

The panelists spoke about inclusivity in the tech industry and how it is a goal for automation to get rid of bias. Jill Weimer, panelist and shareholder of Littler, discussed how she views the recent boom in technological automation.

Tara Lookabaugh, director of startup development at GSV Labs, spoke about success of the evening’s event and her enjoyment with the event’s opportunity to learn.

“I tend to be surprised about what I like most at conferences,” Lookabaugh said. “I’m always excited for the Carnegie Art Museum portion with all of the artwork and the cool experiences, like seeing the demo booths of some Pittsburgh-based start-ups.”

Lookabaugh looks forward to the future of Pittsburgh’s technological development — and sees events like Thrival as an ideal way to get spread the technological ideas throughout the City.

“I think technology is going to be a huge industry in Pittsburgh in the next several years and in the future long-term,” she said. “So I think Thrival is a great way to integrate the rest of the community into that new industry and really get the rest of the City and community behind that future.”

Thrival continues Thursday with a summit at Phipps Conservatory featuring multiple panels, presentations and workshops all related to the Humans X Tech aspect. Friday is the Music X Arts part of the festival, located at Highmark Stadium. Dillon Francis is the headliner and other acts include Matt and Kim, Bear Hands, Bastard Bearded Irishmen and more.