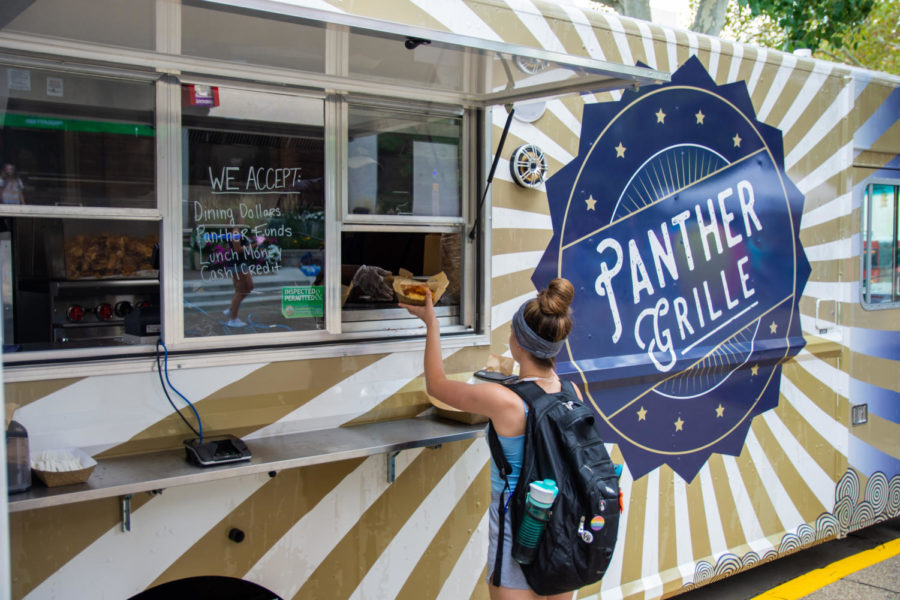 Students commonly experience having to dash into Market-to-Go or the Cathedral Cafe between classes — now, there’s a Pitt eatery that travels as much as they do.

The University’s newest eatery, the Panther Grille, is a blue and gold food truck that journeys to different parts of campus throughout the week, serving up loaded fries and walking tacos between 11 a.m. – 2 p.m. Besides cash and credit, the truck also accepts Panther funds and dining dollars.

The truck is the creation of a group of students enrolled in the Katz School of Business, all pursuing a certificate in leadership and ethics with a focus on ethical leadership and social responsibility. The project, which launched in 2016, made sustainability a priority.

Audrey Murrell, a professor and associate dean at the College of Business Administration who oversaw the project, explained that sustainability played a prominent part in the group’s work for several reasons.

Murrell said that the Panther Grille is a success so far, exceeding their original expectations. Abdou Cole, the resident district manager for Pitt Dining by Sodexo, reported that five academic departments have requested the food truck be present for events, including a department luncheon.

“It has been a tremendous success,” Murrell said.

Students in the certificate program began researching and benchmarking for the project in January 2016. They crafted a business plan that included rules and zoning regulations, operation procedures, a financial analysis, a possible menu and a zero-waste initiative.

“We actually can…feed more people if we reduce food waste,” Murrell said. “From an ethical standpoint, you want to make sure that you are being a good steward of all resources.”

The truck can be used for special events, help serve areas on campus where less food options are present and also work as a “disaster kitchen” — meaning if one eatery on campus cannot run anymore for whatever reason, Panther Grille can be used as a backup.

“In the past, we have situations where there was a water main break or electrical outage and had to close a dining hall. Now, we will just pull up and serve the students,” Cole said.

The original idea came from the Eat & Greet events hosted by the Student Government Board, in which Sodexo members gather to hear suggestions from students in the lower lounge of the William Pitt Union. Cole received comments from the attending students about wanting a food truck.

“It serves the University community, it provides employment and it shows that when students speak, we listen and act,” Cole said.

He went to Murrell about the idea, who appreciated the opportunity for her leadership and ethics certificate students to get some work experience.

“I like that it is going to provide students hands-on experience in running a business, as they will be doing the marketing, promotion, accounting and food ordering for the truck,” Cole said.

It took a lot of contributors to create Panther Grille, including chef Jeff Kenaucy, supervisor of the truck, who can vouch for the truck’s success. He said he’s been taking feedback from students about the food the truck serves.

“I think it’s nice seeing the different students and kinda getting input from them on what kind of food they like,” Kenaucy said.

Kenaucy also talked about the locations the truck has visited, including across the street from Sutherland Hall, the Fifth Avenue side of the William Pitt Union and in between Hillman Library and Wesley W. Posvar Hall, right along Bigelow Boulevard. The truck receives an average of 100 to 150 customers a day, peaking once at 300. He explained that upper campus is a tougher crowd and the lower campus locations usually give more business.

and as soon as the day starts, they kinda make their way downhill and they end up staying the day on lower campus,” Kenaucy said.

Kenaucy and executive chef Conrad Meier at sous-chef, or second in command, helped create the menu. It was up to Sodexo general manager John Crayton to taste-test the results. Kenaucy said that working in the Panther Grille has been a learning experience.

“There are all kinds of things you learn as time goes on, like it tends to get a little messier because of the whole kitchen moves and it gets pretty hot in the kitchen here sometimes,” Kenaucy said.

Cole Bolten, a first-year physics and astronomy major, said his favorite food from the truck was The Point — a panini with turkey, bacon, sliced apple and Gouda cheese.

Pitt Business does a lot of projects with corporations in Pittsburgh, Pennsylvania and throughout the United States, but Murrell is especially proud of this project because of its impact on campus.

“This project is special because it affects home [in] that we were able to do something that provides a valuable resource for Pitt’s campus,” Murrell said. “And we were able to do it in a way that is both efficient as a business enterprise but also socially responsible in terms of its impact.”