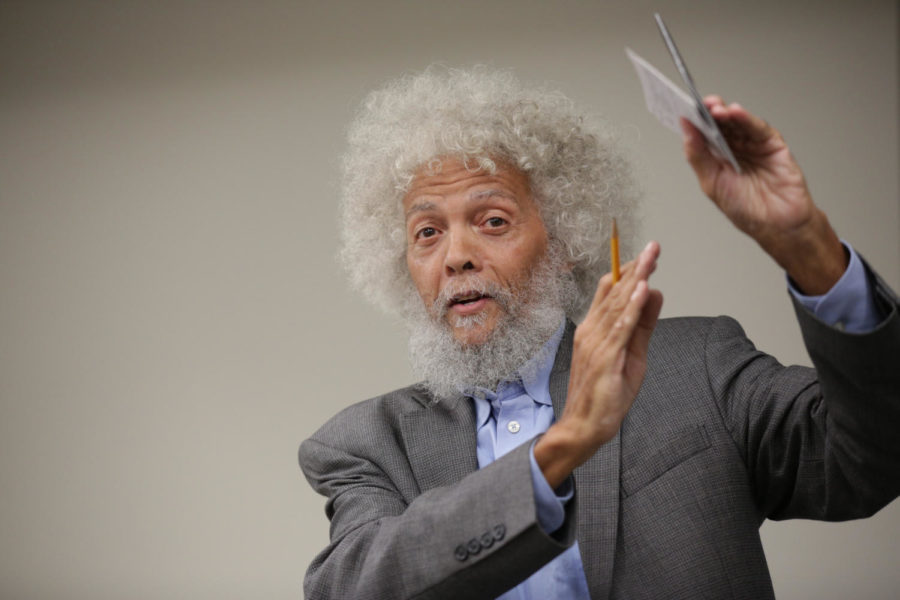 When people think of human rights, Dawn Plummer, director of City of Pittsburgh Food Policy Council, doesn’t want them to think about just one part of it, but rather “the whole cornucopia.”

“Human rights is not something that we’re just going to be given, it’s something we need [to] organize around,” Plummer said.

Plummer was one of several activists who spoke at the Year of Pitt Global event Human Rights in Pittsburgh and the World, discussing ways to “bring human rights home” to Pittsburgh in light of the Universal Declaration of Human Rights’ 70th anniversary in December. The panel took place Wednesday evening in the Alcoa room of the Barco Law Building.

Smith was the first panelist to speak, emphasizing the need for people to advocate for human rights locally because it is not practical to wait on the government to make decisions.

“We always use the slogan ‘human rights don’t trickle down, they rise up,’” Smith said. “We can’t wait for the government to give us rights. We have to take action.”

Smith said Pittsburgh was the sixth city to pass the Convention on the Elimination of All Forms of Discrimination Against Women, an international bill of rights for women. But she said there is still work to be done to make human rights central to policy in Pittsburgh and the entire nation, especially when corporations are currently prioritized.

“Amazon and Uber have a much bigger voice on policy than any of us in this room,” Smith said. “That’s a major problem.”

When Maseru stood up for his turn to speak at the panel, his first words were “let me just say, ‘#registertovote!’” Maseru spoke about the sacrifices our country’s ancestors made to allow people to vote today, and urged everyone to take advantage of this opportunity. He also said President Donald Trump is letting human rights violations pass by as being part of the human experience.

“Some folks are marginalized, and that’s seen as being human,” Maseru said. “Our current president accepts that.”

Torres agreed that apathy plays a role in the progress of human rights — saying human rights decline when people begin to ignore the injustices occurring. He gave the example of 2017 Hurricane Maria in Puerto Rico, when members of his own family lived without power for almost a year because people ignored the issue. He stressed the importance of community engagement and confronting one’s local officials in order to make change happen.

“The current administration has taken concrete steps to removing the U.S. from important human rights treaties,” Torres said. “We can’t depend on the government — it’s up to us. We have a responsibility to our neighbors. When my neighbors are being mistreated, I am being mistreated.”

Plummer spoke about her organization’s efforts to address human rights issues surrounding food and the environment.

“We’re not just looking at one system or one neighborhood,” Plummer said. “Oftentimes people think we’re just talking about food insecurity, but it’s not the case. We think about food, shelter … what [food] we need to grow, [whether] water is clean and [how] food gets from the farm to the plate.”

Plummer talked about food as an integral part of the human experience, not just biologically because humans depend on it, but also because it’s a form of community building.

“Food is just so core and intimate to the human experience and something that whole communities are based around,” Plummer said. “It’s really important in these times of division to have that connection [between] people who live in urban areas to people on farms.”

“I [thought before], ‘Oh, human rights are important [and] we’re all people who should be treated equally,’ but they brought it to a deeper level.”

She said that although some of the ideas were hard for her to understand, she felt inspired by the panel to take action.

“The ideas were really complex, but it did make me want to take action because [Maseru] said African-American women are making 66 cents on the man’s dollar and that’s just really sad.”