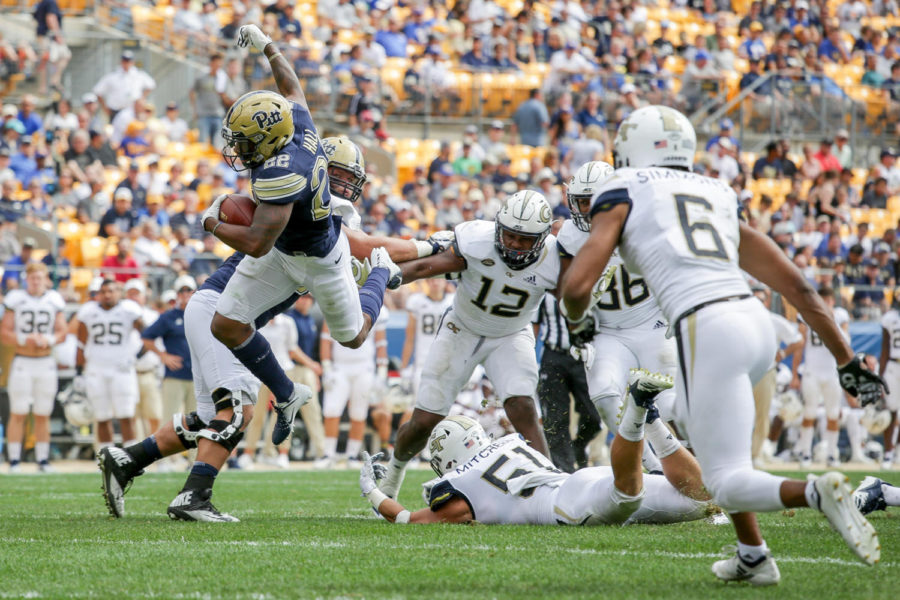 Pitt came into Saturday’s game against North Carolina as a team with much to prove — a team looking to beat the Tar Heels for the first time since joining the ACC, a team hungry to put on a good showing in the second half after struggling to do so this season.

They failed to accomplish either of those objectives.

The Panthers (2-2 overall, 1-1 ACC) faded after leading 28-21 at halftime, getting outscored 17-7 and outgained by 138 yards in the second half. The defense, meanwhile, allowed 486 total yards — the most they’ve allowed all season — as head coach Pat Narduzzi extended his winless mark to four games against the Tar Heels (1-2 overall, 1-0 ACC).

Pitt didn’t open the game like a team hungry to break a five-game losing streak. The Panthers looked stagnant, punting on their first offensive possession then allowing a seven-play, 70-yard Tar Heel touchdown drive. Junior running back Antonio Williams provided the finishing punch by taking a handoff 37 yards up the middle to put North Carolina up 7-0 early.

Pitt’s offense rebounded on the next drive, with sophomore quarterback Kenny Pickett leading the charge. Pickett picked up two crucial fourth-down conversions with his legs, one on a nine-yard rush and another on a quarterback sneak. He fittingly capped the drive off with a seven-yard rushing touchdown, diving into the left pylon just before the UNC defense could reach him. That score tied the game at seven with 2:31 left in the first quarter.

The back-and-forth affair continued when UNC got the ball back, as they once again drove it down the throat of Pitt’s defense without much interruption. The Tar Heel offense drove the full 75 yards downfield for another score — on another touchdown from Williams, this time a one-yard rush — to gain back a 14-7 lead.

Pitt’s defense finally caught a break when junior defensive back Dane Jackson forced a fumble on junior wideout Anthony Ratliff-Williams. The Panther offense took advantage of the miscue, retaliating with an eight-play, 64-yard march capped off with a two-yard score from Ollison. Junior receiver Maurice Ffrench was pivotal on the drive, accumulating 34 yards on three touches.

The Pitt defense continued to resemble a sieve, slice of Swiss cheese, or whatever porous metaphor you might prefer on the next drive, routinely missing tackles and allowing UNC to pick up big chunks of yardage. It took the Tar Heels just six plays to go 75 yards, and junior quarterback Nathan Elliott found sophomore running back Michael Carter all alone in the middle of the field for a 31-yard touchdown pass to complete the drive.

Not to be outdone, the Panthers drove 85 yards in six plays on their next offensive possession. Most of those yards came from senior running back Darrin Hall, who outran the entire defense on a 65-yard touchdown run to tie the score back up at 21 apiece with 3:07 still remaining in the first half.

The Pitt defense finally came up with a stop, giving the Panther offense a chance to take the lead with 1:35 left in the half.

They did just that, quickly driving down within the UNC 10-yard line thanks to a monster 42-yard completion from Pickett to sophomore receiver Taysir Mack. Two plays later, Pickett dished a one-yard shovel pass to senior fullback George Aston for the go-ahead touchdown to take a 28-21 lead — Pitt’s first of the game — just before halftime.

When the two teams headed back to their locker rooms for second-half preparation, the box score showed an unsustainable level of offensive production, with Pitt gaining 297 first-half yards and UNC accumulating 244.

It seemed that North Carolina made the right defensive adjustments at halftime, because the Tar Heels forced the Panthers to punt on each of their first two possessions. The same couldn’t be said for Pitt’s defense — they allowed two quick UNC touchdowns, once again dealing themselves a one-touchdown deficit, 35-28, with four minutes left in the third quarter.

Just when it seemed like things couldn’t get any worse for the Panthers, Ffrench fumbled on the ensuing kickoff return, giving the Tar Heels a short field with the opportunity to take a decisive two-possession lead.

The Panthers finally strung together a productive drive with time winding down in the fourth and Pickett found Ffrench for a 16-yard pass in the corner of the end zone for what appeared to be a touchdown.

But the ref made the puzzling decision to call the pass incomplete. The play was reviewed, showing that Ffrench indeed had control, and placed more than enough feet in bounds to be called a completion. Still, Pitt fans everywhere waited nervously and angrily for the ref’s announcement.

After review, the play was overturned and called a touchdown — Pitt’s first of the season in the second half. The score trimmed UNC’s deficit to 38-35 with 3:12 remaining.

To get the ball back, the Panthers first needed their defense to get a stop.

But, just like they had all game, Pitt allowed the UNC offense to pick up first downs at will.

Facing a crucial third-and-five, the Panthers let Ratliff-Williams rattle off a 12-yard rush for the first down. Two plays later, Williams busted the Pitt defense again for a 15-yard gain. With no timeouts remaining, the Panthers could only watch helplessly as Elliott kneeled out the remainder of the clock, sealing the 38-35 loss.

Pickett’s final statline read 19 of 33 for 174 yards and two touchdowns, as well as 13 rushes for 37 yards and another touchdown. Hall and Ollison rushed for 84 and 72 yards, respectively, with a touchdown apiece. In the receiving game, Mack reeled in two targets for 76 yards and Ffrench caught seven passes for 65 yards and a touchdown.

Perhaps the all-encompassing stat of the game was that Pitt gained just 105 yards in the second half after picking up 297 in the first half.

Pitt’s next game figures to be much more challenging, as the Panthers will face No. 16 UCF on the road next Saturday at 3:30 p.m.