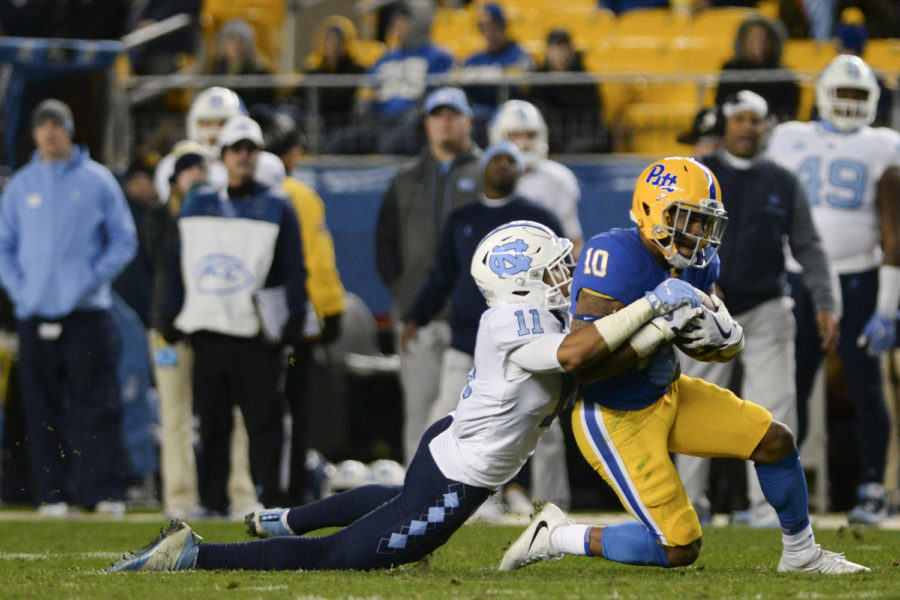 With three of the Panthers’ next four games coming against top-25 opponents, it was crucial for the Pitt football team to come out on top against an inferior North Carolina team this weekend. But the Panthers once again faltered in the second half, a pattern that’s becoming all too common for head coach Pat Narduzzi’s club.

The Panthers dropped their first road game of the season on Saturday, losing to the Tar Heels 38-35 in a high-scoring affair. Four games into the season, the Panthers sit at 2-2 overall and 1-1 in ACC play.

It was a back-and-forth first half, with Pitt facing multiple deficits but eventually scoring consecutive touchdowns to take the lead just before the end of the half. It looked like the Panthers had garnered the momentum heading into halftime, only to fall flat coming out of the locker room following the break.

The Pitt offense couldn’t muster any production, punting on four of its first five possessions in the second half. It wasn’t until three minutes left in the game that the Panthers put any more points on the board, as sophomore quarterback Kenny Pickett found junior receiver Maurice Ffrench for a 16-yard touchdown with 3:12 left in the game. But by that time it was too late, and North Carolina ran out the clock to preserve the win.

That marked the first time Pitt scored a touchdown in the second half of any game this season, as the offense has averaged just 2.5 points per game in the second half, compared to 22 points in the first half. There were various excuses to be made for Pitt’s previous lack of second-half production but this time, it truly cost them the game — the Panthers led by seven points before getting outscored 17-7.

Saturday’s game continued a season-long trend of poor second-half production for the Panthers, as shown by their half-by-half yardage splits — 270 then 137 against Albany, 231 then 69 against Penn State, 215 then 120 against Georgia Tech and a staggering drop from 297 to 105 against UNC. Such a blatant lack of halftime adjustments usually falls on the coach’s shoulders, and Narduzzi needs to put an end to this issue before the fans start calling for his job.

With the departure of big target Jester Weah and speedy Quadree Henderson after last season, the presence of a playmaker at wide receiver became a major concern in the offseason for Pitt. Luckily, the Panthers managed to snag sophomore wideout Taysir Mack, a transfer from Indiana who caught 23 passes for 310 yards and three touchdowns in his first season.

Mack only caught two passes against UNC, but he made them count, picking up huge gains of 42 and 34 yards. There was a high degree of difficulty on each grab too — the first came with defenders draped all over him, resulting in a pass interference penalty, while the second required Mack to extend his body for the diving catch.

Hell of a catch there from Taysir Mack. An underthrown shot from Kenny Pickett, a defender draped all over him (who was called for interference) and he still comes down with the ball pic.twitter.com/9ZBzK9CUDa

Through four games as a Panther, Mack has hauled in 10 passes for 224 yards with an average of 22.4 yards per catch. It looks as if the offense has found its big playmaker.

But the 6-foot-2 Brooklyn native has zero touchdowns, and is averaging just 2.5 catches per game. If this Pitt offense wants to reach its full potential, Mack will need to see more action.

Outside of Mack, only senior wide receiver Rafael Araujo-Lopes has reached triple digits in receiving yards this season with 103. Despite the success the Panthers have had on the ground, the lack of production through the air is a concern that won’t go away — and with games against No. 13 UCF, No. 8 Notre Dame and No. 22 Duke in sight, it will prove crucial for them to figure it out.

The two-headed monster in the backfield

One area of no concern for Narduzzi’s team is the running game. As a unit, the Panthers have accumulated 849 rushing yards on 156 carries, averaging 5.4 yards per rush. Senior Qadree Ollison, who is now fifth in the ACC in rushing yards, has lead the way with 355 yards and 4 TDs on 54 carries.

After leading the team in carries, rushing yards and touchdowns last season, senior Darrin Hall has taken a backseat to Ollison so far this year. Despite taking a cut in touches, Hall makes the most of his opportunities, gaining 163 yards on just 24 carries this season — including his 84-yard showing on Saturday. Hall’s 65-yard rushing touchdown was one of the highlights of the game for the Panthers.

Averaging over 200 yards per game and with a multitude of weapons, this Pitt rushing attack has proven to be the team’s biggest strength. Unfortunately, offensive coordinator Shawn Watson has shown an inability to generate a quality passing attack, with the Panthers ranked 10th in the ACC in passing yards, so the offense will rely heavily on the production of both Ollison and Hall moving forward.