Volleyball picks up the slack for Pitt sports over weekend 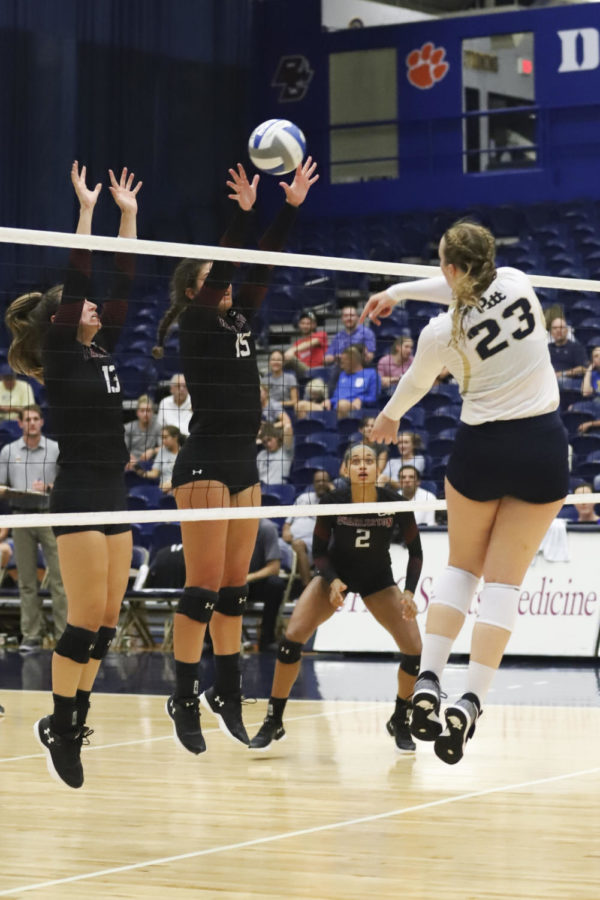 Sophomore Kayla Lund had 23 kills in the team’s victory over College of Charleston Sept. 14.

The past weekend saw a busy slate for Pitt sports, with six different Panther teams in action — including the start of the women’s tennis season. While the soccer teams didn’t fare so well, volleyball picked up the slack with its 13th straight win, sweeping Virginia Tech and adding to one of the best starts in program history.

In her first game back from an injury, junior Nika Markovic once again led the Panthers with 14 kills and finished the day with a .440 hitting average. Junior Layne Van Buskirk tied a career-high nine blocks and added four kills. Sophomore Kayla Lund also got her name in the mix, finishing the day with 12 kills.

“I was pleased with our focus level, especially defensively,” head coach Dan Fisher said in an interview with Pitt Athletics. “It was not our strongest night offensively. We were good, not great. That being said it was huge, because we were so average offensively, to have Nika back. She was able to carry a big load. It’s definitely nice to be off to a good start.”

Pitt volleyball is looking to make history with the best start in program history when it takes on Miami at home on Friday, Sept. 28.

Pitt men’s and women’s cross country teams competed at the Boston College Coast to Coast Battle on Friday at Franklin Park, taking on 10 nationally ranked opponents combined — and getting a sneak peak of the ACC Championship course. The men’s team finished 11th out of 23 teams while the women finished 16th out of 24.

Junior Sam Shields was the top runner for the Panthers’ women’s team in the 5K race, finishing in 15th place with a time of 17:40. Senior Natalie Hilton was Pitt’s only other runner to crack the top 100, coming in 76th.

On the men’s side, junior Nick Wolk was the top runner for the Panthers in the 8K, finishing 23rd with a time of 24:38. Sophomore Zach Lefever and first-year Evan Addison also broke the top 100, coming in 52nd and 87th, respectively.

Abbey Wheeler, a junior at Providence College, was the top finisher in the women’s 5K with a time of 17:10. Amon Kemboi, a sophomore at Campbell University, won the men’s 8K race in 24:02. Ole Miss came in first for the women’s competition and Syracuse won the men’s division.

The women’s cross country team will compete next at the CMU Invitational on Saturday, Oct. 6, at Schenley Park.

Pitt men’s soccer lost its fourth game to a ranked opponent — with each loss coming by one goal — on Friday when the Panthers fell to No. 6 Louisville 1-0 at Lynn Stadium. The Panthers are now 3-4 this season and 0-2 in the ACC.

Louisville senior Adam Wilson scored the only goal of the game in the 79th minute on a penalty kick. Pitt had its golden opportunity to take the lede three minutes earlier when senior midfielder Javi Perez got a penalty kick chance of his own, but Louisville sophomore goalie Jake Gelnovatch came up big with the save.

The Panthers will be back in action on Tuesday, Sept. 25, at 7 p.m. at Ambrose Urbanic Field when they take on No. 18 NC State. This is the first of five home games for the Panthers.

Pitt women’s soccer remains winless through three games of ACC play after falling 6-0 to No. 18 NC State on Sunday at the Dail Soccer Complex.

NC State scored two goals in the first half and four in the second to put the game away in blowout fashion. Juniors Ricarda Walkling and Michaella Van Maanen did the bulk of the Wolf Pack’s scoring, contributing two goals each.

First-years Madeline Gravante and Anna Rico led the Panthers offensively. Gravante finished  with three shots and two shots on goals while Rico finished with two shots and one shot on goal.

The two teams both finished with four saves on the day, but NC State pulled away in every category, including 13 shots on goal to Pitt’s nine. The Panthers didn’t help their cause by committing 14 penalties.

The women’s tennis team saw its first action of the fall season this weekend at the Miami Fall Invite at the Neil Schiff Tennis Center. Doubles and singles played each day, competing against ranked opponents from around the country.

Sophomore Claudia Bartolome recorded Pitt’s only win of the day Friday against Michigan’s No. 61 Chiara Lommer 6-3, 7-6, 7-4. It was Bartolome’s second career win against a ranked opponent. Freshman Mariona Perez Noguera and senior Gabriela Rezende competed in the Doubles Tournament, losing to Michigan’s Anca Carciun and Bella Lorenzini, 7-6 and 7-4.

Pitt doubles had a better day Saturday, winning two of their three matches. The No. 48 doubles team including sophomore Camila Moreno and senior Natsumi Okamoto defeated Michigan’s Lera Patiuk and Chiara Lommer 6-4. Noguera and Rezende defeated Ana Madcur and Lanie Van Linge 7-6. Senior Luisa Varon was the only singles player to win a match for the Panthers on Saturday. She beat Ole Miss’ Cameron Kriscunas 6-2, 6-1.

The Panthers’ next match will be Sept. 29 through Oct. 7 at the Riviera/ITA Women’s All-American Championships in California.

Pitt softball beat Wright State 2-1 and lost to Ohio State 6-2 in a doubleheader on Sunday at Buckeye Field. The Panthers are now 3-1 this fall season after sweeping Slippery Rock in a two-game series on Sep. 16.

First-year Kaitlyn Pavlick played a part in two of the Panther’s four runs, going 2-2 with an RBI against Ohio State, and notching a double and run scored against Wright State.

Pavlick and senior Olivia Gray scored Pitt’s only two runs against Wright State in the first inning of the game. Pavlick led off with a double, then Gray and junior Kaitlyn Kruger both walked to load the bases for senior Gabrielle Fredericks. Fredericks brought Pavlick and Gray home with a two-run double.

First-year pitcher Abby Edwards and junior Brittany Knight combined to keep Wright State to only four hits with Edwards getting the win.

Ohio State got off to a strong start in the second game, scoring five of its six runs in the first two innings. The Buckeyes were able to keep Pitt off the board until the sixth inning, when the Panthers scored two runs, but it wasn’t enough to overcome the Buckeyes’ six-run lead.

Pitt softball will be back in action Saturday, Sept. 29, against St. Francis University at Vartabedian Field.