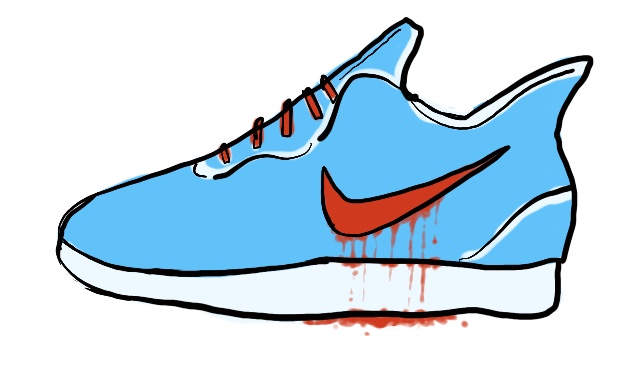 By Sandy Fairclough, For The Pitt News

It’s hard not to have heard of Nike recently — it’s one of the most popular athletic brands and has garnered national controversy since it introduced an ad campaign featuring former 49ers quarterback Colin Kaepernick.

“Believe in something,” the text of one of the ads reads over a black-and-white photo of a solemn-faced Kaepernick. “Even if it means sacrificing everything.”

But despite the ad’s evocative words, it remains unclear as to what exactly Nike believes in. On a surface level, it seems that the company supports Kaepernick’s activism and is trying to make a statement about the human rights issues and racial injustice that plague America today. When taking a closer look at Nike as a company, it’s easy to determine that this is not the case.

In response to pressure from activists, in 2005 Nike published a 108-page report of its abuses, including using sweatshop labor in countries like Indonesia, Cambodia, Pakistan and Turkey, and paying its factory workers as little as $0.14 a day. Working conditions were also proven dismal when the company admitted that 25-50 percent of its factories restricted bathroom and drinking water access to their workers. Nike also admitted to using child labor in these production factories.

This blatant exploitation of labor in countries where people live in desperate poverty does not only show a disregard for human rights, it also proves that Nike’s only concern is making money.  It wasn’t until 1998 that declining sales and protests by the public caused Nike to reconsider its problematic production methods.

In an effort to be more transparent, Nike released factory reports in the early 2000s and made efforts to reverse its other human rights abuses. It agreed to background checks on its workers to make sure they were all of age and promised to release any children it found working at its factories — Nike also promised to provide its employees an education. Further research has not shown that Nike hasn’t followed through on these promises, and that it hasn’t made any significant progress.

Despite Nike’s supposed best efforts, critics today are still concerned with the degree to which the company has addressed its unethical practices. Issues with child labor have continued in countries it’s worked in, and while Nike claims it’s done some work to raise its pitiful wages, detractors claim laborers making the shoes still receive only a tiny percent of the cost to make them. The same goes for the costs of other merchandise the company produces.

If Nike wants to make a difference with human rights, it should start with their own company.  A brand as big as Nike could have a huge impact on ethical industry if it followed the footsteps of smaller wholesale brands, such as Fibre Athletics or Alternative Apparel. Because of how popular Nike is, other brands might start to follow suit.

And since Nike has decided it wants to utilize labor in the Global South, an area rife with human rights abuses, perhaps it ought to address other problems its workers there face in the workplace. While the company doesn’t have control over a foreign country’s local government, it does have authority over the way its own workers there are treated. This kind of a change would require much more than a photograph with some words printed across it. It would require more than raising working standards from horrible to the bare minimum. Nike would have to completely turn itself around and start putting its employees first — by changing its practices to value human rights.

Kaepernick sent an important and groundbreaking message to the American people when he knelt during the National Anthem to protest police brutality. The only message that Nike is sending is that it’s good at noticing trends, that it knows what will make people want to purchase their merchandise and that it’s willing to capitalize on someone else’s humanitarian ideas while ignoring its own inhumane system.

Social activism is not to be confused with a marketing campaign, and this company doesn’t have the authority to stand behind Kaepernick when it hasn’t even stood behind its own workers.

It’s up to the consumer to be conscious and aware of what the brands they support are doing. It’s up to you to decide whether or not you want to let a brand speak for you, to decide if they’ve earned that right. Going out and buying Nike merchandise does not equate belief in human rights because Nike doesn’t represent human rights. Your money is going to a company that has proved to disregard them when it counted.  Because of this, supporting the brand does not necessarily mean you’re supporting the cause, or Colin Kaepernick.

I’m in support of an international brand like Nike using its popularity to further the cause of human rights. Nike has the ability to make a real difference — it needs to just do it, even if it means sacrificing some profits.

Write to Sandy at [email protected]