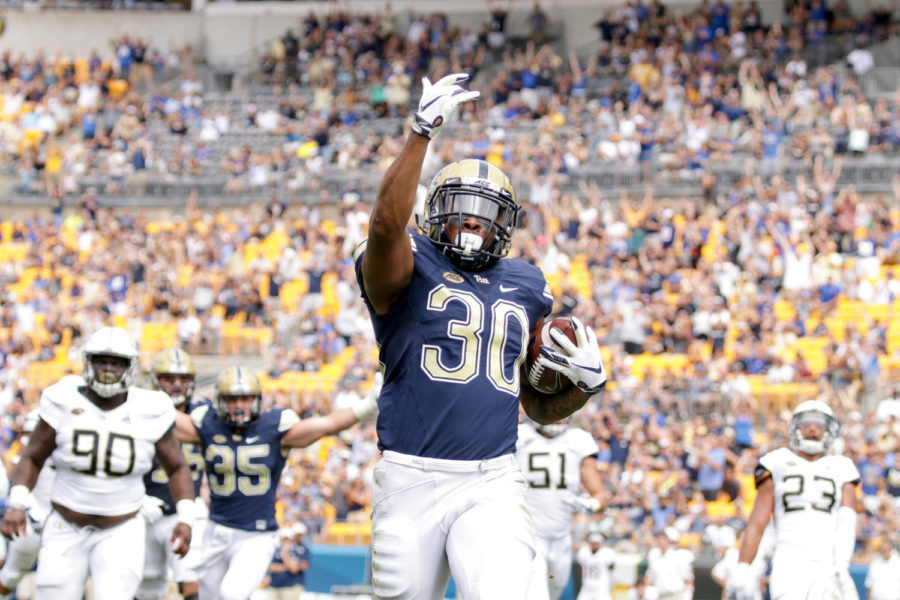 By Griffin Floyd, For the Pitt News

With intraconference ACC play now two weeks in, fall athletics are finally in full swing for the Pitt Panthers. Beyond the volleyball team, which continued its undefeated start to the season, Pitt athletics had an uninspiring week. The football and men’s and women’s soccer teams were left without a win, cross-country had a middle-of-the-pack finish and the softball team went 1-1. Individually, however, there were several outstanding performances.

Qadree Ollison has recently found himself back on center stage for the Panthers’ offense —  something that hadn’t been the case since 2015, when quarterback Nathan Peterman was in his first year at Pitt, freshly transferred from Tennessee. Ollison began his college career as the Panthers’ starting tailback while James Conner battled cancer during the 2015 season.

Following his fight with cancer, Conner returned with a vengeance, reclaiming the starting job and leaving Ollison on the bench, despite Ollison having topped 1,000 yards as a redshirt freshman. After an injury to George Aston, Pitt’s starting fullback, Ollison became the next man up — and he had yet another subpar offensive season as a blocker rather than rusher.

After a tremendous start to the season, however, Ollison reclaimed the starting job, along with the magic that earned him the title of 2015 ACC Rookie of the Year. Since gaining 73 yards on seven carries in the opener against Albany and later averaging nearly six yards per carry against Penn State’s suffocating defense, Ollison has been in the spotlight as the lead running back in Pat Narduzzi’s run-heavy offensive game plan.

Ollison has always been a physical running back, as his time as a lead blocker would suggest. In the offseason, however, he focused on shedding weight, losing 20 pounds from last year’s billed weight. As a result, he has been able to hit the hole explosively and get to the edge on outside runs, with gains of 63 and 31 yards in recent games. Although he has gotten faster, Ollison has still managed to retain his power, punching in several touchdowns and converting first downs in short-yardage scenarios. On the season, he has 57 carries for 355 yards, an average of more than six yards per carry.

As a senior this year, Ollison has been ranked as high as 17th in the nation by position and he is projected to be a late-round pick in the draft. If he continues his stellar play, now as an entrenched starter, his stock will only rise as the season continues.

The Pitt volleyball team continued its hot start to the season, reaching 13-0 last week. Redshirt junior Stephanie Williams was at the forefront of the effort as she reached 1,000 kills for her career. The star outside hitter had 13 kills against the University of Virginia Cavaliers Wednesday, getting her to the 1,000 milestone while hitting 0.400. The game against the Cavaliers was a crucial one as the Panthers began conference play.

Against the Virginia Tech Hokies on Friday, Williams added another four kills, reaching 1,004 for her career. Her impressive offensive performance was only half of the story, though. While playing Virginia Tech, the Panthers had a weaker showing on the offensive side, as Williams’ kill numbers demonstrate. Instead, her defensive prowess was on display as she collected 11 digs during the two-game slate, six of which were against the Hokies.

Williams has been one of the Panthers’ most important players for the past few years, and her strong two-way play was a big reason why the team was able to comfortably sweep both conference rivals 3-0 on the road. The Panthers are now ranked eighth in the nation, and have their sights set on back-to-back conference championships — perhaps even more under Williams, one of their more talented veteran leaders.

The Panthers lost their only game of the weekend on Friday, 1-0 against Louisville. While a loss is still a loss, there was one huge positive in the outcome — the play of true first-year goalie Johan Penaranda, who went on the road against the sixth-ranked team in the nation and only gave up one goal.

Penaranda also had an impressive outing against the University of Detroit Mercy earlier in the week, as the Panthers defeated the Titans 2-0 for the first shutout of his career. Throughout the season, he has managed to keep the Panthers in the game — all of their losses have been by one goal and against ranked opponents.

With a roster primarily composed of underclassmen, Pitt’s future is looking bright with Penaranda at the helm. If the Panthers can get their offense going, Penaranda could be the start of something very special.