Not a mirage: Oakland no longer food desert 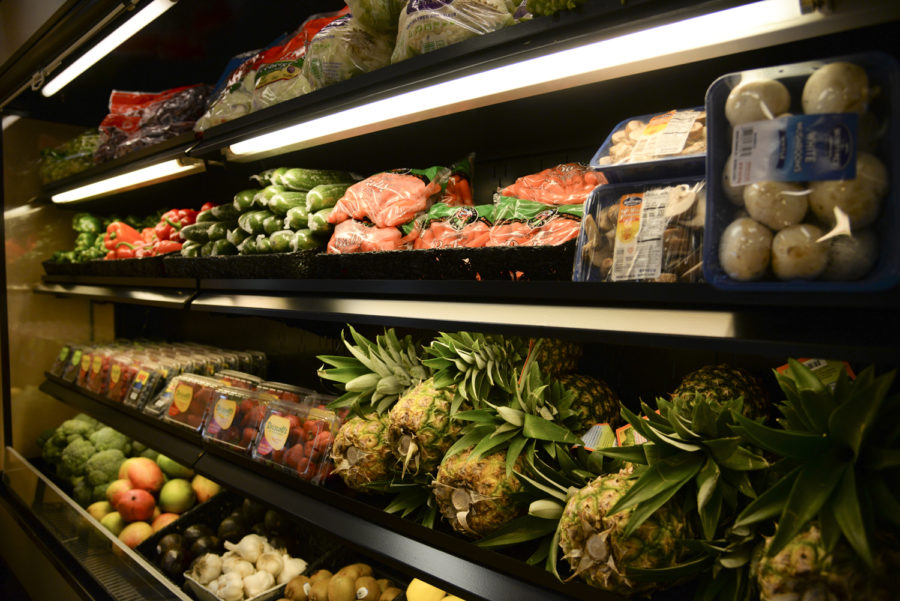 The University stocks several fruits and vegetables in the pop-up grocery store that opened in the old New Balance storefront on Monday.

After serving as the only grocery store on campus for nine years, the IGA’s closing in April 2017 left Pitt’s campus a food desert for more than a year. To buy groceries, students had no choice but to travel outside the Oakland neighborhood — and for those without cars, grocery shopping often became a multi-hour excursion by bus.

But grocery scarcity is no longer an issue on Pitt’s campus. The Grocery Pop-Up opened yesterday in the old New Balance storefront on Forbes Avenue, marking the end of a drought on campus since the closing of the IGA.

According to Joe Miksch, director of media relations at Pitt, the concept of opening a temporary store evolved from discussions the administration had with the Student Government Board. In light of recent student protest over the campus grocery drought, SGB expressed urgency about having groceries available in the time prior to the completion of Forbes Street Market.

“Since Forbes Street Market will not open until next month, we wanted to find a way to make groceries available in Oakland and the pop-up concept seemed to be the best way,” Miksch said in an email. “There was no demolition or renovation needed in the space. It is truly a temporary.”

The location received two violations from the Allegheny County Health Department during an inspection on Sept. 17. The first violation, marked “low risk” by the ACHD, was for missing ceiling tiles. The second violation was for a failure to submit plans for the facility and a failure to provide 10 days notice of the planned opening date for the store in order to schedule its required “pre-operational inspection.”

“The health department visited the site and had a concern about one missing ceiling tile, which was replaced immediately,” Miksch said. He did not comment on the second violation for failing to submit plans for the facility.

But besides taking care of a few minor violations, the temporary store was easy to set up. Abdou Cole, resident district manager for Pitt Dining by Sodexo, said ongoing work on Forbes Street Market meant food vendors were already secured — it was just a matter of relocating them to the temporary location.

“We contacted the health department, went through the necessary inspection and then contacted our vendors who were already in place to service the Forbes Street Market. It was a matter of bringing orders in early that we had already placed for the main store,” Cole said in an email. “Our team worked in partnership with the University’s auxiliary services team to bring the vision to reality.”

The reaction amidst the student population has been largely supportive of the pop-up. Cole said more than 600 customers came to the pop-up store during its first day. Senior finance and marketing major Gillian Kling said the temporary store was a good way to alleviate student tensions during the campus’ grocery drought.

“I know there’s been a lot of issues with them opening Maggie and Stella’s before the Forbes Market, so I think this is a great way to kind of appease that and still have a good option for students to go get their groceries,” Kling said.

Kling enjoyed the nearby location, fresh produce and organic choices featured at the store. But the limited space means limited options.

“I wish they would have more of it. Obviously it’s a small space, but I wish there was more,” Kling said. “I think it’s a good basis. But it would be great if they had more options, which probably they’ll get into when they open the actual location.”

Graham Dore, a sophomore studying neuroscience and psychology, said he’ll likely start buying groceries on campus to avoid traveling to Aldi or Giant Eagle. But regardless of the convenient location, he said he wished there were more diverse options.

“So far, it looks a little bit small. I like the selection that they have, it seems like reasonable prices,” Dore said. “They could have more selection. It doesn’t seem like they have nearly as much as you’d get at, like, Target or something.”

The pop-up store features a chalkboard where students can suggest items they would like to see sold in the store. According to Cole, most of the items suggested are already scheduled to be on the shelves by Tuesday — including guacamole, gluten-free breads and crackers, rice cakes, dried fruits, sliced breads, brown rice, quinoa, vegan cheese and organic whole milk.

Among the top 10 items bought by students yesterday, only one was not a produce item. Cole listed granny smith apples, avocados, local apple cider, baby carrots, fuji apples, strawberries, sweet potatoes, gala apples, red grapes, bananas and pomegranates as the most popular items. These items — and more — will be featured at the permanent location upon its opening on Nov. 1.

“We are featuring items that are going to be offered in the new grocery store. At the same time, this is a good evaluation and a test market of what products students want, which will influence our product line in the new store,” Cole said in an email.

Though current options are limited, most students visiting the store were happy with the selection of produce and pre-packaged food — even mentioning their excitement to Cole throughout the day.

“I spoke to many students who were elated about the pop-up,” Cole said in an email. “Our employees handled it professionally and with the joy of interacting with happy students.”