Voting’s not a pain, it’s a privilege 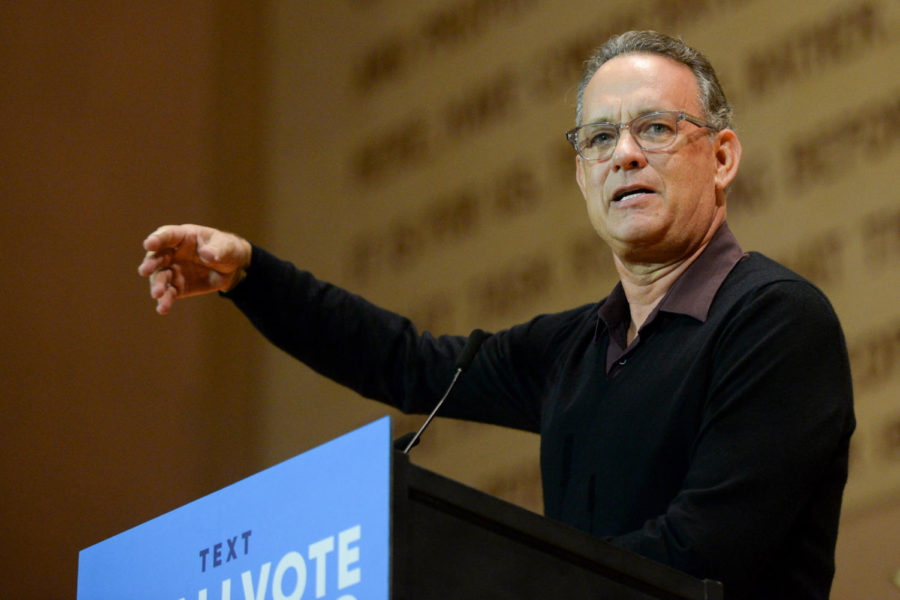 Actor Tom Hanks speaks as a part of Tuesday evening’s “When We All Vote” event. (Photo by Sarah Cutshall | Staff Photographer)

Voting for representation is the core of America’s foundation. It’s why we dumped tea in the Boston Harbor. It’s what separates George Washington from Britain’s King George III. It’s how we distinguish ourselves from the idle subjects of a non-democratic ruler. But for many modern-day Americans, voting in November isn’t a hard-earned liberty — it’s a hassle.

Still, that hassle is essential to our democracy — we can help determine which leaders will act in America’s political sphere. Without the vote, we lose the power to push our city, state and country in the direction we want it to go — and Tom Hanks, who spoke on campus last night, certainly agrees.

Hanks, along with James Conner of the Pittsburgh Steelers, participated in a rally Tuesday led by a national non-for-profit company called When We All Vote — held at Soldiers and Sailors Memorial Hall as part of the organization’s “Week of Action,” featuring voter registration events in cities across the country.

The event strived to improve voter turnout in future elections — but the fact that we as a nation must rely on celebrities to motivate us to exercise our basic democratic right is sad, to say the least. Voting is as much as a responsibility as it is a privilege — and we should never squander any opportunity we have to shape our country’s future.

But since only 50 percent of eligible 18-29 year olds voted in the 2016 presidential election, half our generation clearly is missing their chance. Young voters are the future — if half of us don’t care, that sets a dangerous precedent for generations to follow.

According to Hanks, every upcoming election is the most important in our nation’s history — and each one presents an opportunity for eligible voters to exercise their power.

“[Voting] is a promise, and it’s also a challenge to every single American,” Hanks said. “If you’re not taking part, you don’t get to complain, so shut up.”

Hanks cited the preamble of the Constitution to illustrate the importance of voting — saying that “we the people” can shape our country into a “perfect union” through voting. And thankfully, several initiatives on Pitt’s campus have tried to make this “perfect union” a reality.

With the Oct. 9 deadline to vote in the Nov. 6 general election quickly approaching, Pitt political organization The Bully PulPitt took initiative to inform its peers about politics by hosting Civic Engagement Week two weeks ago — an event that allowed hundreds of students to explore political clubs and most importantly, register to vote.

Pitt political clubs like The Pitt College Republicans, College Democrats, Students for Liberty and Pitt Progressives also host events specifically to inform students about political issues — and with hundreds of members between them, they’re doing a pretty good job.

Clearly, there’s no shortage of opportunities on campus to learn to take part in the democratic process — but if young people take their rights for granted, organizations like these can only help so much.

It is unfair to expect everyone else to elect the candidate that you personally endorse — but according to a study from Pew Research Center, that’s exactly what young people do. They dominate political conversation on social media, but leave the actual voting to older generations.

So millennials’ low turnout at the polls isn’t because they don’t have political opinions — it’s because they don’t make it to the polls. But young people shouldn’t take their voting rights for granted — minority groups have had to fight to legitimize their democratic voices throughout America’s entire history.

Women didn’t gain the right to vote until Congress ratified the 19th Amendment in 1920. Black men technically have been able to vote since the 1870s, but were prevented from actually doing so for almost a century due to racist policies like the Jim Crow laws and biased literacy tests, which were finally repealed by the Voting Rights Act in 1965.

“[The founding fathers] knew that liberty and freedom, the entire concept of what America [was founded on], was evolutionarily certain,” Hanks said. “‘A more perfect union.’ In those days, their wives couldn’t vote, their daughters weren’t going to be able to vote. And if you were a slave of color, you were only worth three-fifths of being a human being.”

Since America’s past is so rife with voter discrimination, we can’t take our voting privileges for granted — which was the point of Civic Engagement Week, according to its head organizer and founder of The Bully PulPitt, Annabelle Hanflig.

“[Voting] is one of the most important things you can do as a citizen,” Hanflig said in an interview. “It’s one of the most tangible ways that you can affect what is happening to you on an everyday basis.”

While voting is not a guaranteed way to get your favorite politician elected into office, it does give you a voice in national politics and local goings-on.

“I think everyone should take interest in the community they’re in,” Hanflig said. “But as college students, we’re in such a privileged position. We should be the ones to go out and change things.”

And since millennials represent the largest bloc of eligible voters in 2018, we must be the ones to make a difference at the polls.