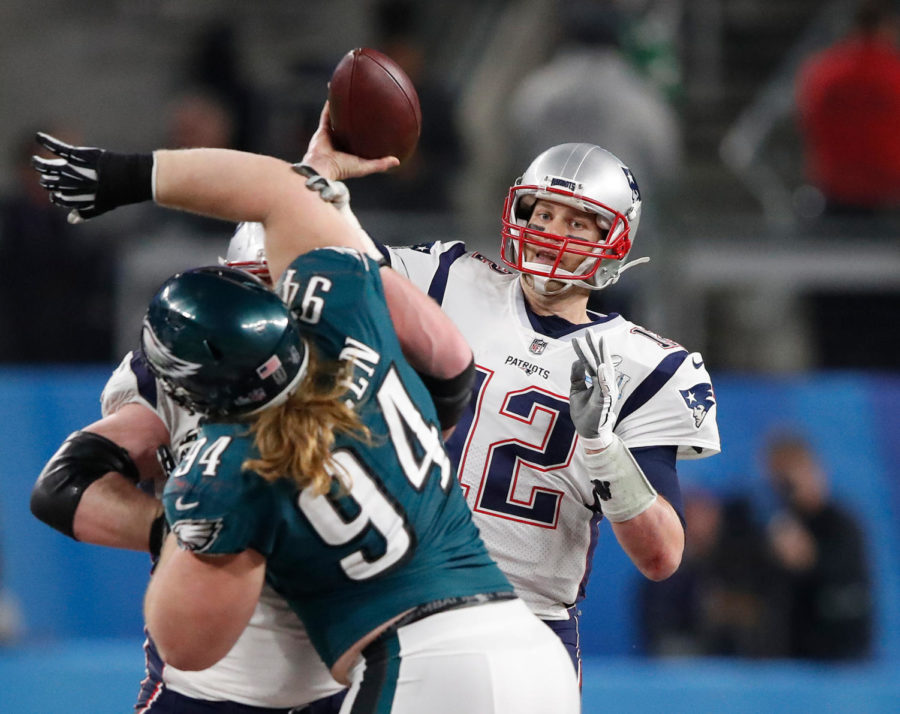 The NFL gave us a surplus of story lines in a wacky Week 3 with the Patriots struggling, the Browns finally winning and Le’Veon Bell continuing his holdout. Combined with the early beginnings of the NBA season, the past week provided plenty of talking points for The Pitt News staff.

Week 3 of the NFL season can only be described with one word — weird.

It wasn’t just one random incidence, but rather what seemed like a league-wide effort among the NFL’s elite teams to inexplicably tank. It started with the winless Buffalo Bills embarrassing the undefeated Minnesota Vikings on the road, 27-6. The Bills, universally considered the worst team in the NFL, were 17-point underdogs, making their win the biggest NFL upset since 1995.

On top of that, the winless Detroit Lions smacked the defending Super Bowl runner-up Patriots 26-10, while the Tennessee Titans knocked off the high-flying Jacksonville Jaguars in an ugly 9-6 affair. The Redskins beat Aaron Rodgers and the Packers, and the Bears and the Eagles added to the drama by nearly losing to inferior opponents.

All in all, it was a week that probably caused many NFL fans to have an existential crisis and question if we’re living in a simulated reality. If nothing else, you can always count on NFC South teams to never play defense, as the New Orleans Saints and Atlanta Falcons engaged in a predictably high-scoring game, with the Saints winning 43-37 in overtime.

The Cleveland Browns won their first game in 635 days on Thursday against the New York Jets, all thanks to the performance of rookie quarterback Baker Mayfield. Mayfield is not just any rookie — he was the first overall selection in the 2018 NFL Draft and came into the league facing high expectations after winning the Heisman Trophy in college. One of those expectations is for Mayfield to lead the Browns to an AFC North division title and he will accomplish that goal this season.

He entered the game near the end of the second quarter after Tyrod Taylor suffered a concussion and put up an impressive stat line for playing about one half, completing 17 of 23 passes and 201 yards. He led the Browns to a 21-17 comeback win after trailing 14-3 at halftime. The keys to the offense now belong to Mayfield as he was named the new starting quarterback for Cleveland Monday.

The AFC North division is up in the air this season. The Steelers are going through a plethora of problems, ranging from a leaky defense to the potential trade rumors of Le’Veon Bell. The Bengals have benefited from an easy early schedule and will not keep up their proficient play for the entire season. The Ravens are the biggest threat to the Browns, but Mayfield will display the leadership and ability to overcome adversity as he did as a walk-on at Oklahoma, leading Cleveland to its first AFC North division title in 29 years.

What the Bell is going on

It’s now three weeks into the NFL season and the Steelers’ superstar running back has shown no signs of returning to the team due to contract disagreements. Le’Veon Bell is enjoying his time away from the team and field, shown by his partying and jet skiing in Miami. Steadfast in his ways, Bell will not play another snap for the Pittsburgh Steelers. By holding out three games, he has already forfeited roughly $2.5 million.

Recent rumors have developed, stating that there are a few teams interested in a trade for Bell. The issue with trading for Bell is that he must agree to sign the franchise tender in order to be dealt. Essentially, Bell has an unofficial no-trade clause, allowing him to guide the path that the Steelers proceed in. The most likely scenario is pairing Bell with a team that has a large amount of cap space to handle Bell’s expensive demands.

James Conner has already filled Bell’s shoes, playing well in the first three games. Averaging more than 100 yards from scrimmage and a touchdown each game, there is little reason for the Steelers to stop feeding the hot hand. Bell has decided that he has already played his last snap as a Steeler, hoping to find a new home with a bigger bank.

The New England Patriots is one of the best teams in the NFL almost every single season. Coach Bill Belichick and star QB Tom Brady have led the Pats to three of the last four Super Bowls, piling up two wins in those three appearances. However, the first three weeks of this season have gotten off to a rough start as the Patriots sit at 1-2.

Belichick always seems to be able to get his team rolling when it really counts, but this season feels a little different. New England gave up almost 400 passing yards to Blake Bortles in a 31-20 loss to Jacksonville in Week 2, then lost to the previously winless Lions, 26-10, in a Week 3 game where the Pats’ offense looked listless.

The Patriots will have newly acquired star Josh Gordon on the field against the 3-0 division rival the Dolphins this week and will get Brady’s favorite target, Julian Edelman, back from suspension in Week 5. These past two weeks could be a fluke. But if injuries continue to pile up and the offense doesn’t get its gears turning, the Pats could come up short of the Super Bowl. With rookie quarterback Patrick Mahomes on fire for the Chiefs, Jacksonville’s lockdown defense and Pittsburgh’s prolific offense all on the table in the AFC, this year just seems off for the Brady and Belichick tandem.

The NBA doesn’t suck after all

Tuesday marked the unofficial beginning of the 2018-19 NBA season as all 30 teams took the floor for the first time in training camp. The NBA presents a lot to look forward to every season, but for many fans it’s hard to get excited about a season in which they can easily predict the ending — especially after four-time All-Star center DeMarcus Cousins joined the Golden State Warriors, who’ve already won two consecutive NBA Finals.

Kevin Durant made waves of his own in the summer of 2016 when he decided to sign with the Warriors. Immediately following the announcement, Durant’s Twitter account filled with people calling him “weak” or “a snake.” My initial reaction was not forgiving, either. I thought that NBA season was a wrap — hand Golden State the trophy now and save everyone some time.

In the years since, my attitude toward Durant’s decision has softened. It turns out Kevin Durant and the Warriors dynasty did not make the NBA less entertaining or watchable. In fact, NBA viewership and revenue both went up and the 2018 NBA Finals had its highest viewership since 1998. National stations like ESPN and TNT both saw increasing viewership and every individual franchise surpassed $1 billion in value for the first time ever.

So no, Kevin Durant did not ruin the NBA — he made it stronger, and the era of super teams will not stop me from enjoying basketball at its highest level this season.