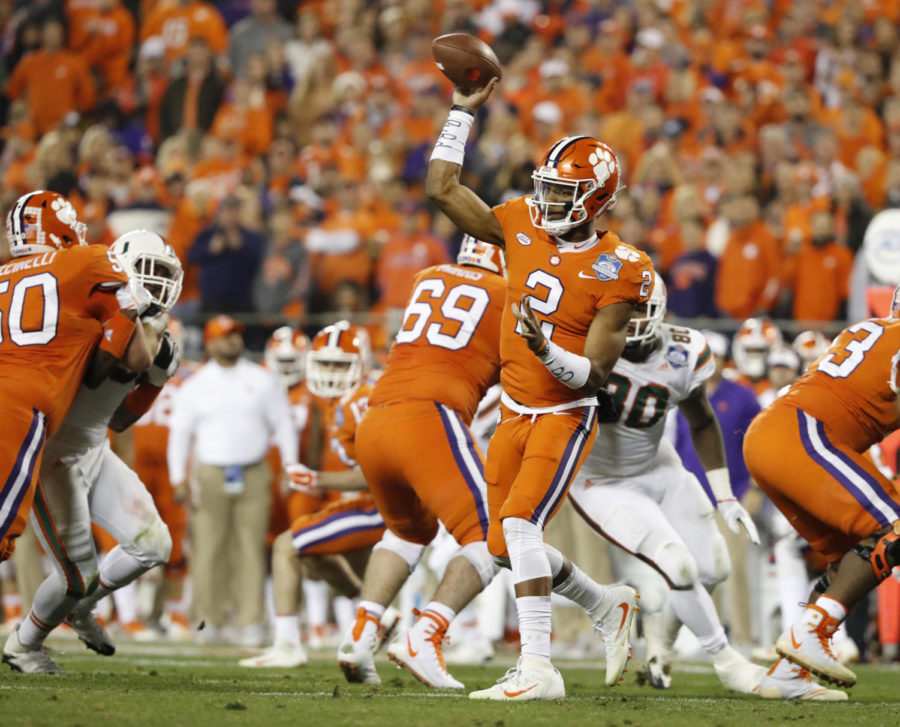 Clemson Tigers quarterback Kelly Bryant (2) sets up to pass in the second quarter against the University of Miami Hurricanes in the ACC Championship Game Dec. 2, 2017 in Charlotte, N.C. (Al Diaz/Miami Herald/TNS)

We’re roughly a third of the way through the college football season, and it’s becoming easier and easier to distinguish the contenders from the pretenders. The ACC, however, still remains a giant question mark aside from Clemson’s typical dominance. So the question remains: outside the Tigers, who’s any good? Here’s a glance at the current power struggle within the conference.

After making the College Football Playoff the past three years, Clemson has established itself as one of the preeminent programs, not just in the ACC but the entire nation. This year appears to be no different. Aside from a narrow 28-26 win over Texas A&M in Week 2, Clemson’s closest game this season was decided by 28 points. That came this past week, in a blowout 49-21 victory in their ACC opener against Georgia Tech. First-year quarterback Trevor Lawrence has surprisingly stolen the job from incumbent senior starter Kelly Bryant, but it doesn’t matter who throws passes for this team — their elite defense will win them games no matter what.

No, you’re not misreading — that is indeed Syracuse all the way up at number two. Will the typically middling Syracuse Orange be one of the best ACC teams down the stretch? Probably not. But that doesn’t take away from the fact that they’re playing like one of the hottest teams in the ACC thus far. Senior Eric Dungey is one of the premier dual-threat quarterbacks in the nation, leading his team in both passing and rushing yards. The Orange boasts an offensive unit that has scored under 50 points just once this season, and rank 13th nationally in yards per game with 523.3. An upcoming meeting with Clemson will show if Syracuse is the real deal or not.

Four undefeated teams remain in the ACC and Miami isn’t one of them. But to their credit, that opening loss came to the best opponent any ACC team has faced this season, No. 5 LSU. The Hurricanes used the anger from that loss and took it out on their next three opponents, a bevy of no-name non-conference competition which they beat by an average of 38 points. In the Hurricanes’ last game against Florida International, first-year quarterback N’Kosi Perry replaced senior quarterback Malik Rosier and shone in the spotlight. If Miami continues to roll with Perry, it could unlock another element of its offense that the erratic Rosier never could.

Duke would be higher on this list if not for their bleak future outlook, which took a dive in Week 2 when experienced junior quarterback Daniel Jones suffered a clavicle injury which will leave him sidelined for much of the season. If that wasn’t bad enough, 2017 All-ACC first team junior cornerback Mark Gilbert suffered a season-ending hip injury in the same game. Junior quarterback Quentin Harris has performed admirably in Jones’ stead, but the Blue Devils are likely to lose a few games while Jones tries to recover before the season’s end.

Virginia isn’t a particularly flashy or exciting team, as their offense is ranked around the middle of the pack for most statistics. But the Cavaliers get the job done, and they make their name on the defensive side of the ball, holding opponents to just 297.5 yards per game — good for 14th in the nation. Virginia’s stock is on the rise especially after a strong showing in Week 4, blowing out Louisville 27-3. The Cavaliers won’t contend for a top spot in the ACC, but they can put up a good fight on a weekly basis and should improve upon last year’s 3-5 conference record.

NC State is technically undefeated, but they’re also the least proven team in the ACC, having yet to play a quality team or conference opponent. The Wolfpack dodged a bullet by having their Week 3 game versus No. 12 West Virginia rained out, or else they’d likely be 3-1. Still, they’ve taken care of business against their three inferior opponents, and senior quarterback Ryan Finley has put up some pretty numbers, leading the conference and ranking fourth nationally with 352 passing yards per game.

Virginia Tech, then-ranked No. 13, came into Week 4 with a great outlook as one of the best teams in the ACC, with an easy matchup versus winless Old Dominion on deck.

It’s amazing how much can change in just one week.

As 29-point underdogs, Old Dominion shocked the nation and beat Virginia Tech 49-35 in easily the biggest upset in college football so far. If that wasn’t bad enough, the Hokies’ star sophomore quarterback Josh Jackson fractured his tibia in the fourth quarter and could miss the remainder of the season. On top of all that, the coaching staff released junior defensive lineman Trevon Hill from the team on Sunday morning for reasons not revealed publicly. Hill was one of VT’s most dominant defensive players, leading the team in sacks and tackles for loss.

All said, the Hokies’ hellish week vaulted them out of the national rankings and toward the bottom of most ACC power rankings.

Like Virginia Tech, Boston College came into Week 4 flying high with a No. 23 ranking. They too came hurtling back to earth with a crushing 30-13 loss to previously winless Purdue. The Eagles still boast a formidable team led by sophomore running back AJ Dillon, the eighth-leading rusher in the nation with 122.8 yards per game. Unfortunately, their schedule isn’t going to give them an easy time, as they have to run through the ACC gauntlet by playing Clemson, Miami, Syracuse and Virginia Tech.

The Seminoles recorded one of the worst seasons in recent program history last season, going 3-5 in the ACC and 7-6 overall. Head coach Jimbo Fisher got out of there just in time, leaving incoming coach Willie Taggart to come in as the scapegoat for what he correctly suspected would be a dumpster fire of a team. Florida State, one of the most consistently dominant programs in the nation, got walloped in their first two ACC games, 24-3 to Virginia Tech and 30-7 to Syracuse. If this was any other team they’d be lower in the rankings, but the sheer pressure of potentially being the first FSU team since 1981 to miss a bowl game should push the Seminoles toward a .500 season at least.

Wake Forest got beat pretty badly, 56-27, in Week 4, but at least it was to a very good No. 8 Notre Dame team. What keeps the Demon Deacons from being lower in these rankings is the fact that they have a tangible strength — their offense, which averages the 19th most yards per game in the country with 506. That high-powered offensive system should be enough to give them a chance in most games, regardless of how their defense plays.

Unlike Wake Forest, the Panthers don’t seem to be good on either side of the ball. Out of 130 teams, they rank 102nd in total offense and 86th in total defense. This season was hyped up to be a change from last year, when Pitt underachieved with a 5-7 record and missed a bowl game for the first time since 2007. But after losing to the lowly North Carolina Tar Heels for the sixth straight year, it appears to be more of the same. With an overly-conservative offense and porous defense, don’t count on the Panthers to make much noise this season — although they’ll likely find the motivation to knock off a top opponent late in the season, as they’ve made a habit of doing in recent years.

As it turns out, star quarterback Lamar Jackson was the only thing keeping Louisville from descending into mediocrity. With the former Heisman Award winner now in the NFL, the Cardinals are one of the worst offensive teams in college football, sitting at 125th in total offense. They lost 27-3 to Virginia in Week 4, and will take on Florida State this week in a game unofficially titled “The battle of teams who were great two years ago but stink now.” One of them will have to win.

Yes, the Tar Heels notched a 38-35 victory over Pitt on Saturday. But that was more due to Pitt’s random and historic inability to play well against UNC than anything else, with the Tar Heels being the only ACC Coastal team that the Panthers haven’t beaten in six tries since joining the conference. In the two games before facing Pitt, UNC lost to weak opponents in Cal and East Carolina. They simply lack the talent to contend on a weekly basis.

Things aren’t looking good at all for long time head coach Paul Johnson’s Yellowjackets. Since beating Alcorn State in the season opener, Georgia Tech has dropped three straight games, including one to the struggling Pitt Panthers and a blowout loss to Clemson. After running the same triple-option system for the past 10 years, it appears opposing defenses are finally figuring out how to stifle the offense. Throw in a middling defense that allows 413.7 yards per game, and you’ve got a Georgia Tech team set up to struggle this season.