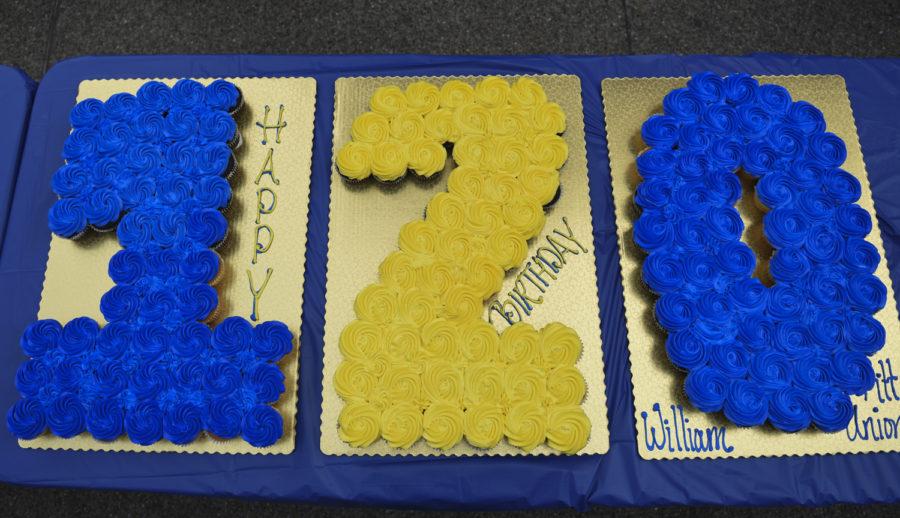 By Hannah Schneider and Grant Burgman

Built in 1898, Hotel Schenley was designed to reflect entrepreneur Franklin Nicola’s vision for the Oakland community to become a center for culture and education. Fast-forward 120 years and Nicola’s dream has manifested — now through the presence of student organizations, affairs and activities.

The William Pitt Union turned 120 on Monday and the building’s staff hosted a 120th birthday party to celebrate. More than 150 students passed through the Union, taking advantage of free food, trivia, prizes and other interactive activities. The first floor featured a board that said “I love my Union because,” where students were able to post heart-shaped cards to the board.

According to Olivia Lynch, one of the assistant managers for the Union, the building has a complex history. It began as a hotel, with guests such as Babe Ruth, Lillian Russell and numerous U.S. presidents. Pitt purchased the building in 1956 — and after a $1 million renovation, the top four floors were converted into a men’s dormitory called Schenley House, while the floors below were repurposed into a student union.

In 1983, the Schenley House was renamed the William Pitt Union, with the sole purpose of housing student activities and organizations. Lynch said it’s important to recognize the history of the building in celebrating its age.

“The William Pitt Union’s such a historic building,” Lynch said. “I don’t think it gets recognized a lot, so I think it’s great to kind of celebrate the 120th.”

“They actually dressed up, just like it would be at the Schenley Hotel,” Lynch said. “They had carriages and it was a time period, so we decided to do something just a little special for the 120th birthday.”

Lynch said along with housing student affairs and organizations, the building accommodates spaces for fundraising events, presentations, studying and recreation. But the spaces aren’t always used to their full potential.

“There’s a lot of things we house in our building, and I don’t think a lot of students utilize our space,” Lynch said. “That’s why we’re kind of promoting it and doing a big birthday party, to recognize, like, hey, come visit our space. We have a lot of great things that we can offer.”

While initially attracted by the prospect of free food, junior literature major Emma Wolinsky said the birthday celebration and events like it prompt students to go to places on campus where they usually wouldn’t go.

“[These events] attract students to certain locations in which they otherwise probably wouldn’t visit,” Wolinsky said.

First-year Abby Butt attended the event after hearing the music from nearby. She said events like the Union’s birthday celebration help support a sense of community within the student population.

“It’s like a great way to, like, form a sense of community and get people involved in different things,” Butt said. “It’s like, besides Cathy, another center of the campus where people either meet up just to do work or get food or go to clubs and stuff.”

Kaitlyn Downey, a first-year biology major, said while the Union offers a central location for student organizations and activities, it also offers a general meeting place for students. Since the Union is frequently holding events, Downey said she sometimes visits the building in search of something to do.

“You can bring your friends to them. Like, we tell people on our floor like, ‘Oh, there’s something going on down here, let’s go,’ and then it’s nice to hang out with them,” Downey said. “Being down here, it’s really nice, because they always have something going on. And if I’m bored, I can just come and see what’s happening.”