Touching me, touching you: The story behind ‘Sweet Caroline’ at Pitt 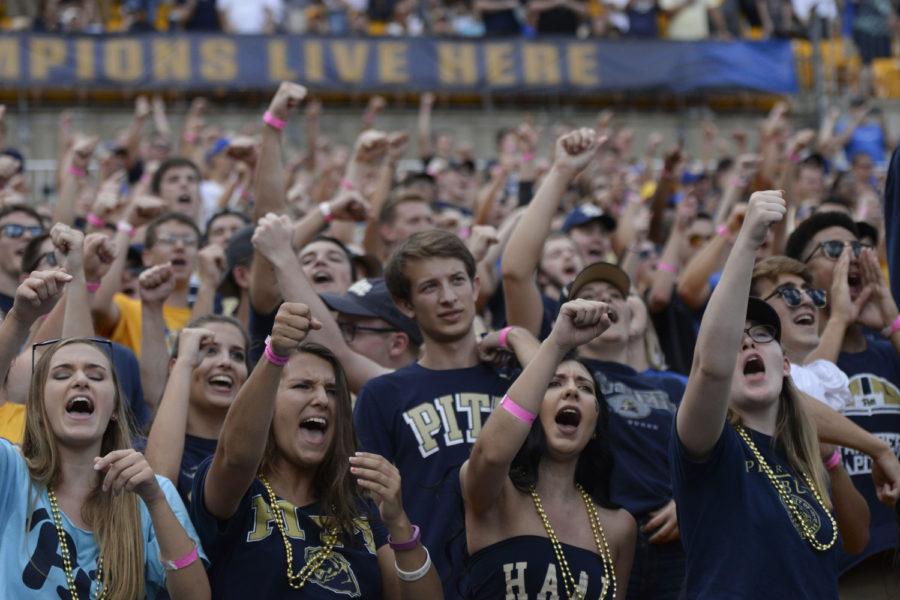 Justin Acierno and Corey Hartman have never met. But they will always be tied together by one thing — their love for “Sweet Caroline.”

Hartman, a 2011 Pitt grad, loved the tradition so much that when he became a father in April 2018, the name for his new baby girl was an easy choice — Caroline.

But that name wouldn’t have any meaning without Acierno, a 2007 Pitt grad — the father of Pitt’s “Sweet Caroline” tradition, which he and a team of Pitt students and athletics employees created over lunch at Hemingway’s Cafe in the summer of 2008.

“As I was thinking of different songs, I proposed ‘Sweet Caroline’ as one of them,” Acierno said. “Rather than it being just ‘Sweet Caroline,’ you could make it into a Pitt cheer, and that’s what I think really sold the other students on it.”

Acierno knew what it was like to play and coach at Heinz Field for the Panthers. He played fullback from 2001 to 2005 and accepted a graduate assistant coaching position at Pitt following graduation.

But during his time with the football team, Acierno realized there was something missing. Pitt didn’t have a game-day experience or tradition. So after receiving his master’s in 2007 and accepting a job with the athletic department focusing on football and men’s basketball fan experience, he decided to change that.

“I was fortunate enough to get that position and that’s when I really started focusing on how to improve the game-day experience and fan interaction,” Acierno said. “And that’s where ‘Sweet Caroline’ really kind of came from.”

Acierno’s inspiration to have a game-day song came from Texas A&M and Ohio State University. Though he can’t remember the song, Acierno can easily recall how impressed he was once while watching Texas A&M’s entire stadium sing and perform chants in unison. He was further impressed at his sister-in-law’s graduation at Ohio State when attendees sang “Hang on Sloopy.” Seeing how it had became an anthem for Ohio, Acierno wanted to emulate that.

So he reached out to Student Affairs and different campus organizations that were heavily involved in celebrations on football game days. The final group that would eventually pick “Sweet Caroline” was made up of athletic department employees, members of Greek life, Student Government Board, the Panther Pitt and the Oakland Zoo.

Once he had his team, Acierno asked them what songs got people the most excited on weekend nights in bars. They came up with two — “Livin’ on a Prayer” by Bon Jovi and “Sweet Caroline” by Neil Diamond.

“We kind of felt like ‘Livin’ on a Prayer’ wasn’t a good message to be sending when you were going into the fourth quarter and trying to win a game, you don’t want to necessarily be living on a prayer,” Acierno said. “So we looked at ‘Sweet Caroline’ … and people old, people young, all can recognize the song, they can all understand it and it was one of those unifying songs we knew everyone would know.”

So, as Acierno’s assembled team had lunch at Hemingway’s, it was settled — ‘Sweet Caroline’ would play at the end of the third quarter at Pitt football games. The next challenge was making sure fans knew what was going on and would participate.

Acierno’s team put together a YouTube video and passed it around to different student organizations. The video explained what they were doing, how it was going to work and how cool it would be. They also passed flyers around to students before the game so they knew what to do and the lyrics were put on the video board so the crowd could sing along.

The big moment was initially scheduled for the first game of the 2008 season against Bowling Green University at home. But the Panthers were losing, so Acierno’s team decided to postpone the launch.

They finally had their opportunity the next week against the University of Buffalo on Saturday, Sept. 6.

“The second game was a very similar situation,” Acierno said. “We weren’t playing very well, but we were still having a pretty good game and it felt pretty good, so we did it. The whole crowd got into it right away, they knew exactly what was going on.”

Following the crowd’s enthusiastic sing-along, the Panthers pushed hard during the fourth quarter and won the game.

“From there on [we] solidified that as something we should be doing,” Acierno said. “All the students had fun, they enjoyed it and we really saw some success from it.”

Dave Wannstedt, former Pitt football head coach, didn’t know what was going on during the first few games when the tradition was still new. And while he thought the sing-along was a good idea when the Panthers were winning, he wasn’t as much of a fan of Neil Diamond when the game wasn’t going well.

“Honestly I didn’t realize what was happening the first few games,” Wannstedt said. “Then if we were winning, players singing along and dancing was great! If it was a tight game or we were losing I wasn’t really amused.”

But it didn’t matter. “Sweet Caroline” had made an impact on students and was around to stay.

Corey Hartman never knew why “Sweet Caroline” started playing at Pitt football games, but he remembers thinking how cool it was, especially with the words “Let’s go Pitt” subbed for the “bomp-bomp-bom” in the chorus. It wasn’t until a couple years after he graduated that he decided if he ever had a daughter, he was going to name her Caroline.

“I just loved the song and how much of a tradition it was to Pitt football,” Hartman said. “I was thinking, ‘man, if I’m ever lucky enough to have a daughter I want to name her Caroline, just so I can sing that song to her.’ Every time I sing it I’ll think of Pitt football and every time I talk to her I will think of all the great times I had there.”

Lucky for him, his wife, Kristy, was a Pitt fan growing up and was on board with the idea.

The family of three has Pitt football season tickets and Caroline went to her first game Sept. 1 against Albany. While the Hartman family was late to the game, they were able to roll their car windows down as the song played in the stadium and sing the lyrics to Caroline from the parking lot. But they’ll be at the homecoming game this week — and hopefully before kickoff.

“This weekend, my dreams will be fulfilled,” Hartman said.

There have been some changes to the “Sweet Caroline” tradition since it was first introduced 10 years ago. In 2016 it changed from playing at the end of the third quarter to playing at random times throughout the game.

“I think at times you overthink things but at times you find ways to keep things fresh and I think this is kind of a cross between the two,” Acierno said. “Having it be able to play whenever excitement or fan unity is needed is a good idea.”

According to Emily Yarish, a senior information science major and president of the Panther Pitt, the longer the tradition goes on the better it gets because more people know the words and know what to do.

“Everybody is catching on and we can carry it without the music which we have done the last two games which was great,” Yarish said. “It’s just fun to see everybody take part in it and no matter when it’s played.”

The players also feel and feed off the excitement.

“We definitely love fan support and when they are screaming and roaring and give us a boost of energy,” first-year wide receiver Shocky Jacques-Louis said. “We hear it sometimes and we try to sing along if we are up and we are winning. It gets us hyped up because it feels like the fans are on the field with us, they’re part of the team too.”

Senior offensive lineman Connor Dintino tries not to listen to it so he can stay focused on the field, but when he does hear it, he feels at home.

“Sometimes we hear it, but there are other times we don’t even look up and listen to the crowd,” Ditno said. “It’s nice to hear it, it’s nice knowing you’re at home when you hear that song, but a lot of the times we are just locked in.”

According to Acerino, no one sitting in Hemingway’s could have thought “Sweet Caroline” would not only still be playing at football games 10 years later, but also at graduation ceremonies. They could not have imagined it would become an anthem for Pitt fans, following them all over the country — or that it would be something Pitt fans name their daughters after.

“Once students started buying in everyone said, ‘Well, we trust you, let’s see what it does,’” Acerino said. “And so I’m glad they trusted me.