What are the odds: Orange you glad you didn’t bet on Pitt? 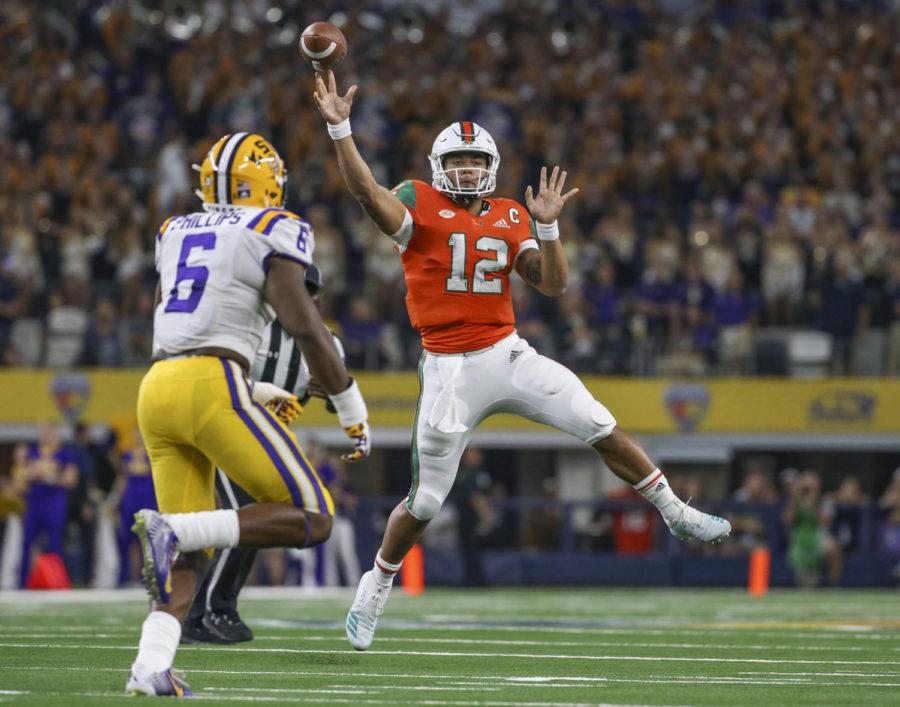 Miami Hurricanes quarterback Malik Rosier (12) throws a pass in the first quarter against the LSU Tigers during the AdvoCare Classic on Sept. 2 at AT&T Stadium in Arlington, Texas. (Al Diaz/Miami Herald/TNS)

Last week was a tough one, going only 3-5 in my bets. The special NFL feature bet of the Baltimore Ravens win over the Pittsburgh Steelers was my downfall. I missed on the Steelers covering the -3 spread in the 26-14 loss. The low-scoring performance by both teams was two scores away from the 50.5 over/under. Maybe if Steelers running back Le’Veon Bell had been playing, the team would have scored more and hit the over.

Regardless, that brings the season total to 13-11 — which is above 0.500, so I’m perfectly alright with it. I need to get back on track this week and become more consistent in my picks. We’re getting to the point in the season where every game has more and more impact on the postseason. Conference rivalries are in full swing and there are some great matchups this week, so let’s take a look.

Analysis: Talk about having very different games last weekend. Syracuse was very close to pulling off an upset of Clemson, a top-five ranked team, for the second straight season. Last year, they knocked out starting quarterback Kelly Bryant and upset the Tigers at home in the Carrier Dome. The Orange must have had the same game plan because they injured star first-year quarterback Trevor Lawrence right before halftime. Because Kelly Bryant announced Sept. 28 that he’d transfer schools, he was ineligible to come in and replace Lawrence. Syracuse took advantage of that and nearly upset Clemson on the road. The Orange then allowed a 94-yard drive which resulted in Clemson scoring a touchdown and winning the game 27-23 with 41 seconds left.

Pitt went into the home of defending national champions UCF and ended up wishing they never got off the plane. The 45-14 loss was a poor performance by head coach Pat Narduzzi’s squad. They now have a must-win game at Heinz Field for homecoming weekend. The defense will have to step up if they have hopes of stopping Syracuse’s high-scoring offense. Led by senior quarterback Eric Dungey, the Orange have scored 44.2 points per game and 480.8 yards of total offense. That doesn’t look good for a Pitt team that has allowed 430.6 yards per game. Expect Syracuse to score a lot and Pitt to attempt to keep up.

Bet: Take the Orange to cover the spread and bet the over.

Analysis: There’s nothing like a good old-fashioned defensive SEC battle. The Florida Gators are on a hot streak after winning on the road last week at Mississippi State 13-6. They’ve won three games in a row since losing to their rival, the undefeated Kentucky, last month. Florida’s defense was rock solid against Mississippi State, only allowing the Bulldogs to gain 43 yards on offense in the second half. According to ESPN, Florida football legend Tim Tebow, the 2007 Heisman Trophy winner and two-time National Champion, will be inducted into the Ring of Honor during halftime along with his 2008 National Championship teammates. Expect “The Swamp” in Gainesville, Florida, to be filled with excited fans cheering on their Gators.

Head coach Ed Orgeron and his LSU Tigers have been strong all season, but this will be their biggest test to date. Coach O will make sure his players stay focused despite all the extracurricular activities taking place throughout the game. This is the highest the No. 5 Tigers have been ranked under Orgeron and he’d like to keep their momentum going. Graduate transfer Joe Burrow has settled into his role as starting quarterback. He threw for 292 yards and ran for a team-high 96 yards in their blowout victory against Ole Miss last week. Look for him to continue leading the Tiger offense that has finally picked up their scoring.

Bet: LSU will cover the spread and take the under.

Analysis: The annual Red River Rivalry gets a top 20 matchup in this year’s battle. This will be the 113th time the two Big 12 rivals face off, with Texas leading the all-time series 61-46-5. Texas head coach Tom Herman has his toughest test in his second season leading the Longhorns. They ended a 16-year losing streak in Manhattan last week when they beat Kansas State 19-14. The Texas defense has allowed only 333.2 yards per game this season, and they’ll need to figure a way to continue that average against Oklahoma’s high powered offense that has had averaged 523.2 yards per game.

Dual sport athlete Kyler Murray has been on fire for the Sooners this season. The Oakland Athletics drafted the quarterback in the first round of last year’s MLB draft. On the football field, Murray has passed for an average of 294 yards per game and has a total of 17 touchdowns with only two interceptions on the season. Undefeated Oklahoma looks to keep their College Football Playoff hopes alive with another top-20 victory. The Sooners have won 27 of its last 28 Big 12 conference games, with 16 of those victories won by at least 15 points.

Bet: Take Oklahoma to cover the spread and bet the over.

Analysis: A rematch of last season’s NFC Championship game will have the crazy Philly fans ready for kickoff. The Vikings have upgraded their offense from last season by signing veteran quarterback Kirk Cousins. However, the move hasn’t been as successful as imagined. The team has yet to rebound since they beat the San Francisco 49ers by a score of 24-16 on opening night. After a shocking loss to the Buffalo Bills in week three, the undefeated Los Angeles Rams beat out the Vikings in a shootout on Thursday night 38-31. Minnesota’s defense will need to get back to playing like a championship contender, and they can’t let Eagles quarterback Carson Wentz throw all over them like Jared Goff and the Rams did for 556 total offensive yards.

With Wentz officially back for the Eagles after sustaining a season ending ACL injury last year, the team is ready for this primetime matchup. Philadelphia is coming off a tough overtime loss to the Tennessee Titans 26-23. Wentz threw for 348 yards and two touchdowns in the loss. He’ll need his teammate, wide receiver Alshon Jeffery, to continue playing well for the Eagles to beat Minnesota. Jeffery had eight catches for 105 yards and a touchdown in his season debut after coming back from a shoulder injury last week. Expect Wentz to find his big time target in the endzone again this Sunday.

Bet: Take the Vikings to cover the spread and bet the over.

All spreads and over/unders are taken from https://www.oddsshark.com/