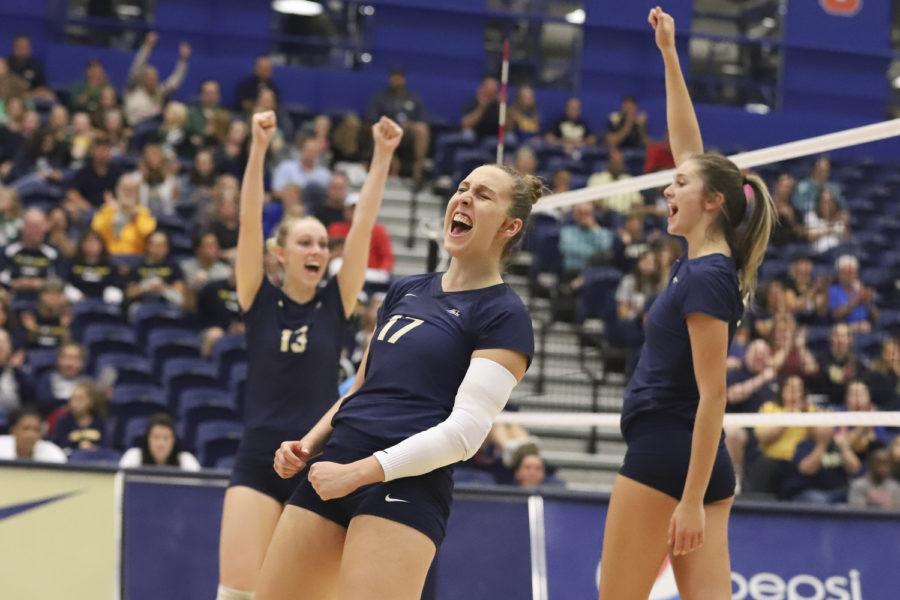 In addition to the football team’s big win Saturday, several other Pitt sports teams contributed quality performances over the weekend. Most notably, the volleyball team notched two more wins to extend its perfect season to 17 games, and the men’s soccer team maintained momentum by earning their second consecutive victory.

Pitt’s eighth-ranked squad extended its unbeaten streak at home this weekend, beating Syracuse on Friday, Oct. 5, and the Boston College Eagles on Oct. 7.

Against the Orange, the Panthers started the first frame on a roll, winning 25-9. The middle sets were the closest, with each team taking one set, 25-23. The Panthers came out ready for the fourth set, however, and cleaned up easily, winning 25-11 for a 3-1 victory. Pitt’s offense was rolling during the contest, as sophomore Kayla Lund recorded 21 kills and junior Nika Markovic added another 18.

Facing Boston College on Sunday, the Panthers had one of their closest matches of the season, despite sweeping the Eagles — the first two sets were 25-22, and the final was 25-21. Lund and Markovic starred again as the leading scorers with nine and 10 kills, respectively.

Going forward, the team will have an action-packed week, facing North Dakota State at the Fitzgerald Field House on Oct. 9, before facing North Carolina and NC State on a weekend road trip. The Panthers are now 17-0, their best start in team history.

Pitt’s fall tennis team spent the weekend at Northwestern University, competing in the Wildcat Invitational. Senior Luisa Varon starred in the event, reaching the finals of her bracket before being forced to withdraw due to the scheduling of the team’s trip back to Pittsburgh.

The team had a strong showing all around, recording three singles wins on Friday night including Varon, and two wins in doubles as well. On Saturday the results were the exact same, and the doubles tandem of senior Natsumi Okamoto and sophomore Camila Moreno ranked 48th, recording a dominant 6-1 victory.

The team will travel to Lynchburg, Virginia, next weekend for the Women’s Atlantic Regional Championship, for the Oct. 12-16 event.

Pitt’s swimming and diving teams opened their season Saturday against Florida State and Georgia Tech in an ACC meet at Tallahassee. The men’s team lost 176-123 against the Seminoles, and 188-111 against the Yellow Jackets. The women’s team lost 197-102 and 173.5-125.5 against their respective opponents.

Junior Valerie Daigneault was the top performer for the women’s team, winning the backstroke in the 100m and 200m races, as well as the 200m IM. Senior Brian Lovasik was the men’s best athlete, winning the 200m and 500m freestyle races. Both teams will be at home on Saturday, Oct. 13, to face George Washington University with a chance to improve on their 0-2 records.

Pitt’s fall ball squad wrapped up their seven-game season on Sunday at Kent State. The Panthers found themselves in a 6-0 hole early on as the starting pitching struggled.

Matched up against the Golden Flashes’ ace of the rotation in junior Madi Huck, the offense was unable to get going until the fourth inning, and it wasn’t enough. Senior infielder Alexis Solak was the Panthers’ top performer, batting .500 on the day and scoring two runs.

The Panthers lost 8-4, ending their fall ball season with a 5-2 record. The regular season will begin in February.

The men’s soccer team began the weekend with a statement double overtime victory over the conference rival Clemson Tigers. Sophomore forward Edward Kizza scored the game winner 101:57 into the game, his second of the night, for a 2-1 finish. Kizza took a stretch pass from midfield and outran three Tigers defenders to beat keeper George Marks one-on-one.

First-year Johan Penaranda was again spectacular in goal, stopping two of the three shots he faced. The Panthers are now 6-5 on the season, with upcoming matches against Cleveland State and on the road at Virginia Tech on Friday, Oct. 12.

The women’s soccer team lost 2-0 at home against the Clemson Tigers in the conclusion of homecoming weekend festivities. Both goals were scored off of turnovers, a throw-in in the first half and a corner kick in the second. Redshirt sophomore Amaia Pena managed to keep the game close for the Panthers as she was forced to make 10 saves, a drastic amount for a soccer game.

The Panthers, a young team who continue to improve upon last season, are now 4-8 on the season, but none of those wins have come in conference play. They will have a seven-day break before going on the road to play No. 8 Virginia on Oct. 14.