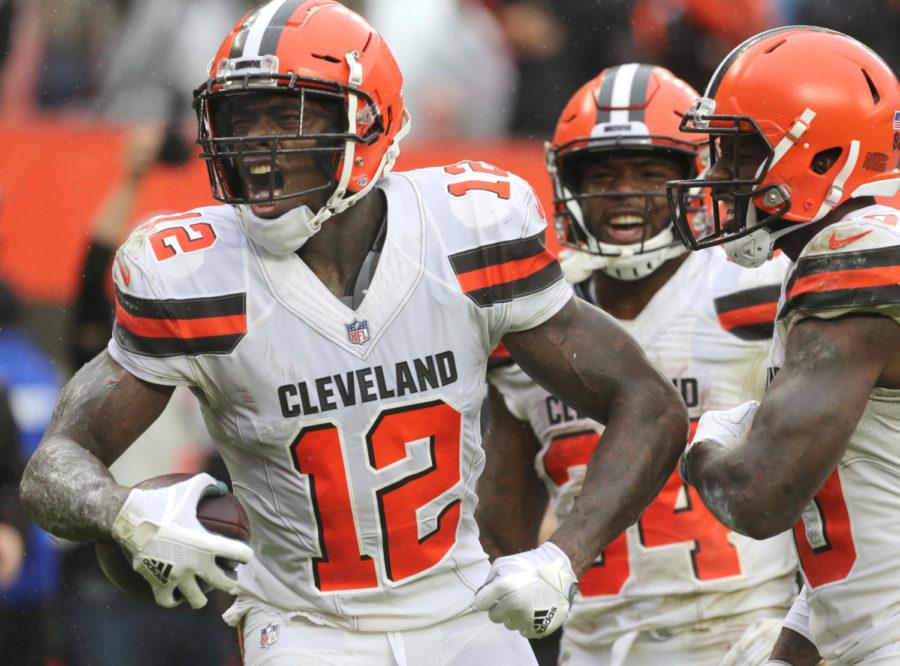 Josh Gordon celebrates his fourth quarter touchdown against the Pittsburgh Steelers on Sunday, Sept. 9, at FirstEnergy Stadium in Cleveland. The game ended in a 21-21 tie. (Phil Masturzo/Beacon Journal/TNS)

Current New England Patriots wide receiver Josh Gordon has often been at the center of ridicule and criticism about his personal and professional struggles. The player nicknamed “Flash,” has proven that he can be a game-changing talent when on the field, but the story of Gordon’s career has been marred by his off-the-field issues. Suspensions and substance abuse violations kept Gordon from fully realizing his talent and holding down a spot on an NFL roster.

Gordon contributed a solid stat line last Thursday for the Patriots, catching two passes for 50 yards and a touchdown. Those numbers wouldn’t look incredible for any other player, but for Gordon, they resembled much more — the culmination of a journey back to the NFL after taking a two-year hiatus to deal with drug addiction.

Coming out of Lamar High School in Houston, Gordon played two seasons of college football for Baylor University — but following a 2010 season, in which he posted 42 receptions for 714 yards and seven touchdowns, Gordon failed a drug test. This was his second substance violation in as many years.

Gordon was suspended indefinitely and eventually transferred to the University of Utah. After sitting out for one season due to NCAA transfer rules, he declared for the 2012 NFL Supplemental Draft, where he was drafted by the Cleveland Browns. He would go on to become one of the league’s most productive rookie receivers, catching 50 passes for 805 yards and five touchdowns. That was the last full season Gordon played.

Gordon followed up his standout rookie campaign with a two-game suspension in 2013 for violating the league’s substance abuse policy, but was still selected to the Pro Bowl after accounting for more than 1,600 yards in his final 14 games.

A DUI earned Gordon a 10-game suspension in 2014 and another substance abuse violation kept him sidelined for all of 2015. He was reinstated in time for 2016 training camp, but had to sit out the first four games of the regular season. Before Gordon could step on the field during that season, he checked into an in-patient rehabilitation facility.

“This is the right decision for me and one that I hope will enable me to gain full control of my life and continue on a path to reach my full potential as a person,” he wrote in a statement he released when he began his treatment program.

Gordon was then released from the facility and played two games at the end of the 2017 season. This season, Gordon played just one game for the Browns before being traded to the Patriots for a fifth-round draft pick. Gordon has played sparingly in New England, but showed flashes of his tremendous talent by catching Tom Brady’s 500th career touchdown pass last week against the Colts.

Gordon has been ridiculed by football spectators for years. Entering this season, many expected the same Josh Gordon to show up, get suspended and repeat the process that has come to define his NFL career.
But I see a different Josh Gordon  — and an extremely hypocritical system that has come to vilify Gordon despite overlooking other cases.

Look at where Gordon’s presence on the national football stage began —  Baylor University. The Bears football program is infamous for its cover-up of sexual assault and rape cases by former head coach Art Briles, the same man who suspended Gordon in 2010 for testing positive for marijuana. The same coach who ignored the calls for help from victims of sexual violence determined that Gordon was unfit to be on his football team.

You can also see the stark contrasts between Gordon’s story and the careers of other troubled NFL players. Tyreek Hill, another All-Pro wide receiver for the Kansas City Chiefs, pleaded guilty to domestic assault and battery when he was in college at Oklahoma State, but that part of his past is quickly forgotten when fans and coaches see Hill sprinting down the sideline for a touchdown on Sunday afternoons.

Now I understand that sports, especially football, can sometimes harbor shady characters for the sake of their talent, and to stop supporting someone because of a past mistake is wrong. But is Josh Gordon truly among the worst the NFL has to offer and deserving of the treatment he’s received?

Booger McFarland, a former Tampa Bay Buccaneers player who currently works for ESPN as an analyst, remarked in 2017 that he didn’t think Josh Gordon deserved a place in the NFL.

“He needs to get his own life in order first,” he said.

But Gordon was shunned from football for his mistakes while men like Richie Incognito, who used a racial slur to verbally abuse a teammate, or Joe Mixon, who is on video physically assaulting a woman, are welcomed with open arms. Were Incognito or Mixon asked to do the same kind of self-examination and exhibit the same self-sacrifice as Gordon? No — both players were absolved of their past mistakes and returned to the football field unscathed.

Gordon deserves a chance to remake himself in the NFL not just because he is an incredible talent, but because he is someone we should all strive to be like. Unlike so many of his peers, Gordon owned his problems and took the steps necessary to get better, no matter how difficult or embarrassing they were. That’s why it’s so awesome to see him back on the field catching touchdowns in New England, regardless of your feelings toward the Patriots. Josh Gordon is trying to overcome his demons and continues to prove that he is up to the task.

All reports out of Foxboro have been glowing about Gordon’s work ethic, commitment, talent and character. In a time where the NFL has become more and more controversial for issues like the roughing the passer rule, kneeling for the anthem and concussions, Gordon is one of the bright spots that make football worth watching. A comeback story for a star player suffering from addiction should draw our admiration — not disdain — and this Sunday, when Josh Gordon takes the field on national TV, remember that his story goes beyond football.