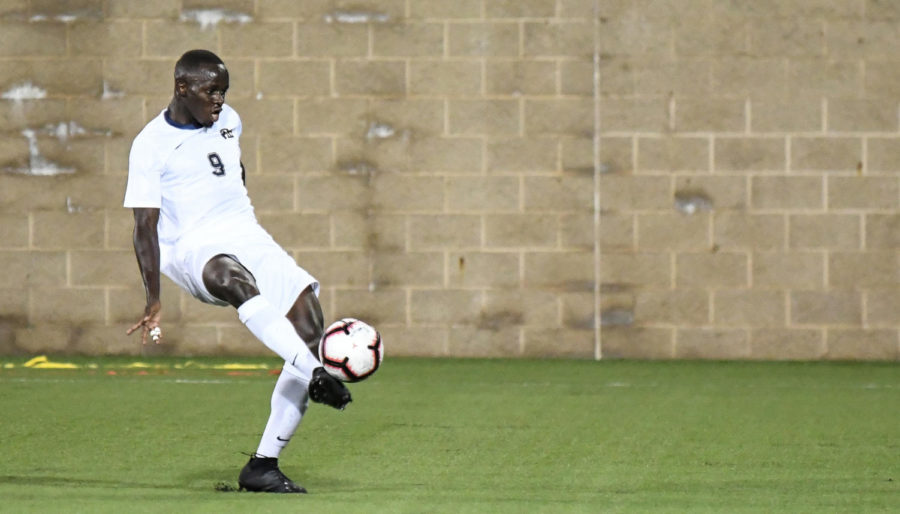 Sophomore forward Edward Kizza is responsible for 11 out of the Panthers’ 19 goals this season. (Photo by Bader Abdulmajeed | Staff Photographer)

The 2018 season so far has been full of many highs and lows for Pitt athletics so far. The men’s soccer team beat Clemson 2-1 in overtime and then fell to Cleveland State 4-3. The women’s soccer team remains winless in the ACC but has already won more games than all of 2017. Meanwhile, the volleyball team is making history with the best start to a season in program history. The Panthers are one of two undefeated teams in the NCAA, having just moved up two spots in the AVCA Coaches Poll and ranking No. 6 overall.

While all three teams have yielded different levels of success, there are athletes Pitt fans can look to for hope as the year progresses. Edward Kizza, Amaia Pena and Kayla Lund are all having standout seasons on the field and on the court, leading their teams to improvement in some cases and hopefully championships in others.

The men’s soccer team is currently 6-6 overall and 2-3 in the ACC. While five of its six losses were against ranked opponents, Pitt’s overall record still leaves a lot to be desired. Luckily for the Panthers, they have a bright future in sophomore forward Edward Kizza.

Kizza earned his second hat trick of the season on Monday in the Panthers’ 4-3 loss against Cleveland State. Kizza has scored in six of Pitt’s 12 games this season, including three multi-goal games. His first hat trick came in the fourth game of the season against the University of Delaware. Ten games later, on Friday, Kizza was the hero against Clemson, scoring the Panthers’ only goals in the 2-1 overtime win.

Of Pitt’s 19 goals this season, Kizza is responsible for 11 of them. His 11 total goals lead not only the Panthers, but the entire ACC. Kizza also leads the team in points, shots and shots on goal. Out of those categories, Kizza is ranked second in the ACC for points with 22, earning 1.83 points per game on average. He also ranks third in the ACC in shots taken with 32.

Redshirt sophomore goalkeeper Amaia Pena had a career day Sunday against Clemson. She recorded 10 saves in Pitt’s 2-0 loss. After appearing in seven games as a redshirt freshman in 2017, Pena is seeing most of the time in goal in the 2018 season — and she’s proving why.

Pena is ranked second in the ACC with 56 saves and 4.67 saves per game on average. She faced a career-high 18 shots against Louisville earlier this season, only allowing the Cardinals two goals in the match. Pena also has two shutouts this season against Morehead State and Duquesne.

Starting nine games and seeing playing time in 12 of Pitt’s 13 games this season, Pena has given up 19 of Pitt’s 29 goals in 908 minutes. The Panthers have earned all four of their wins with Pena as the goalkeeper.

The Panthers are currently 4-8-1 on the season and remain winless in the ACC. While it can be difficult to see any positives in the midst of the rebuild under first-year head coach Randy Waldrum, Pena can be a source of hope for all Pitt fans that the best is yet to come for this young women’s soccer team. The Panthers will look to snap a six-game losing streak in their next game against No. 6 Virginia on Sunday.

Pitt volleyball is in the midst of a historic season. The Panthers are currently 18-0 — the best start in program history. The team’s success wouldn’t be possible without a few key players, including sophomore outside hitter Kayla Lund.

Lund leads the Panthers and ranks second in the ACC with 282.5 points, averaging 4.71 points per set.

Lund is also dominating from the service line. She is tied for first in the ACC in service aces with 24. She earned a season-high four aces against High Point on Sept. 15.

On defense, Lund is second on the team with 153 digs, including a season-high 13 against Florida State.

Lund is just one of five players who has appeared in every set this season for the Panthers, and it makes sense as she leads Pitt in four categories — total kills, kills per set, total aces and aces per set.

As the Panthers go up in the rankings and get closer to making a run in the NCAA tournament, keep an eye on Lund. She is one of the youngest hitters on the court, but also one of the most dominating. Next up for Pitt is a Friday-night road matchup with North Carolina.