Each month, the University’s only late-night show hosts a live comedy show with performances from students and locals. 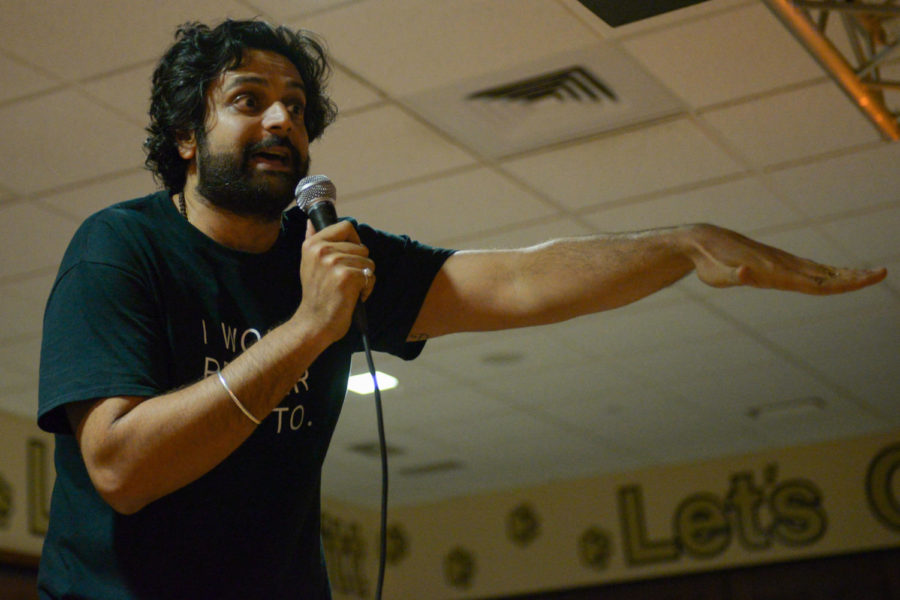 Lorenzo DiSilvio took the stage in Nordy’s Place last night with the lights turned low in front of an audience ready to listen.

“You know, riding the bus really gives you a chance to look around like you’re in a glass menagerie covered in fingerprints — big, greasy fingerprints, just everywhere,” DiSilvio said with a deadpan look. The crowd roared with laughter as DiSilvio began his introductory remarks.

This month’s event was hosted by DiSilvio, a junior English writing major. He has performed stand-up for five years and has opened for acts at other venues like the Burning Bridges Comedy Club in Lawrenceville.

DiSilvio became involved with “Collegiates and Comedians” through an old friend, former host of the event Phil Forrence. As he finished his opening remarks, DiSilvio swiftly introduced Nate Nulph, a 2016 Pitt graduate. Nulph’s bits were filled with observational takes on the depressing motifs of adulthood, drawing inspiration from comedians like John Mulaney and Mike Birbiglia.

“I like to compare myself to Brad Pitt,” Nulph says to the audience. “But you know, like Brad Pitt if they sold him at Aldi.”

He continued by talking about his love of Chinese food — or rather, the most questionable Chinese food he can find from the restaurants along Oakland Avenue. Nulph reminisced about memories from his childhood, especially the day he finally got his first sex talk in the middle of a Dairy Queen. His humor traversed between themes of anxiety, ex-girlfriends and the general disappointment of becoming an adult.

As a graduate of Pitt, Nulph hopes to introduce college students to stand-up through his routines. With the comedy scene in Pittsburgh growing, he thinks there’s a lot of potential for it to become a positive outlet for people.

The audience was still laughing from Nulph’s segment when Andrew Dow, a junior sociology and communication major, arrived on stage. He opened by commenting on his own clothing style, referring to his loose-fitting white T-shirt and black pants as a “gentrified wiccan.”

Dow continued by commenting on his life as a member of the LGBTQ+ community and the hilarity of his interactions with men in his life. The audience laughed as Dow told stories about dinners with his friends’ families and his time working at TJ Maxx. For a while, Dow was unsure about his role in comedy, but through events like “Collegiates and Comedians” he has felt inspired to give stand-up a try.

“I’m the host of ‘Pitt Tonight,’ but before that, this kind of inspired me to do stand-up more because I saw a lot of my friends, like Lorenzo, and I thought that it was cool,” Dow said.

After Dow wrapped up his routine, the audience took a moment to settle down, but not before Pranav Behari — who headlined the Milwaukee Comedy Festival — commanded everyone to keep the applause going for all of the performers.

As Behari demanded the applause continue, he gave different members of the audience characters — “Wiccan girl” and “Wednesday Addams-looking girl” — and lead the audience in a five-minute round of applause. He continues with jokes about his uncomfortable sexual encounters with women and relationships.

The night’s headlining act featured Derek Minto. He sent the audience into a final reel of laughter with stories about bullies calling him fat, his ability to sweat through an entire show and his drunken adventures as an RA at Duquesne University.

After the show was over, the audience applauded, still giggling. For DiSilvio, these shows are about creating a sense of togetherness in a fun and dynamic way. He hopes that in the future, the program can continue growing and spreading laughter through stand-up.

“Comedy is happening at this university and it’s good comedy,” DiSilvio said. “There are people here and we’re growing and if you want to get involved, college is a good time to start. It’s a good opening and we’re fun people.”