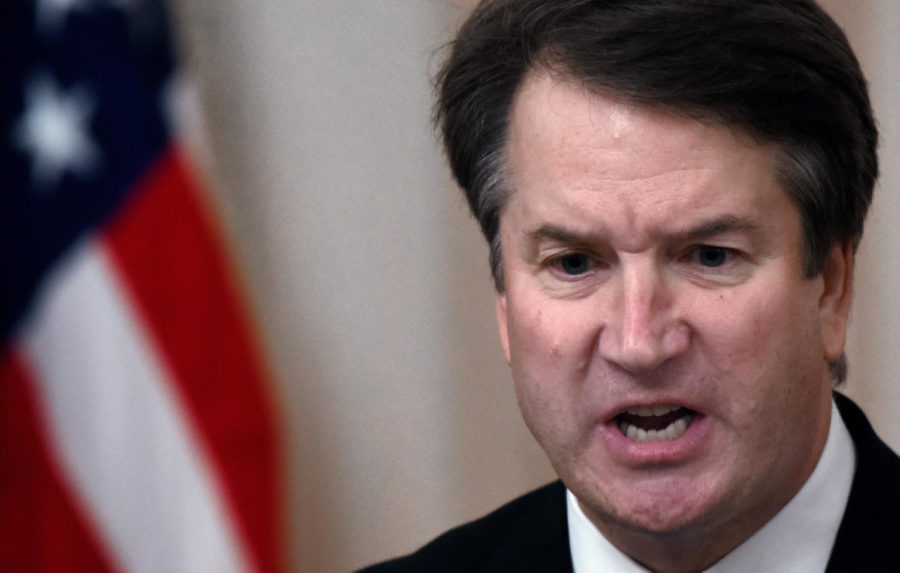 Brett Kavanaugh, associate justice of the Supreme Court, speaks during a ceremonial swearing-in event in the East Room of the White House in Washington, D.C., on Monday. (Olivier Douliery/Abaca Press/TNS)

By Allison Dantinne, For The Pitt News

For the first time in America’s history, the Senate confirmed a justice to the Supreme Court with only a 38 percent of the nation’s support. Even as the vote happened, throngs of protesters could be heard yelling “shame, shame, shame!” from the public galleries, referencing Christine Blasey Ford’s sexual assault allegations against Justice Kavanaugh.

Many senators — especially Republicans like Mitch McConnell — believed Ford’s allegations were too vague and inconclusive to disqualify Kavanaugh from the Supreme Court.

“The American people know that sexual misconduct is gravely serious,” McConnell, R-Ky., said in a floor speech Tuesday. “But the American people also insist that vague, unsubstantiated and uncorroborated allegations of 30-plus-year-old misconduct … is nowhere near the grounds to nullify someone’s career or destroy their good name.”

McConnell’s right in some ways — many of the alleged witnesses who could have corroborated Ford’s case weren’t interviewed, nor were Kavanaugh’s other accusers. But that’s not Ford’s failing — it’s the failing of the lackluster, “limited-in-scope” FBI investigation that President Donald J. Trump approved last week.

The investigation initially seemed like a victory for those who opposed Kavanaugh’s nomination, but from the start, it was clearly designed to favor Kavanaugh’s version of events. The FBI interviewed only nine people, most of whom were Kavanaugh’s high school friends — Patrick “P.J.” Smyth, Timothy Gaudette, Christopher “Squi” Garrett and Mark Judge. But the FBI already knew Kavanaugh’s friends would support him because they all released statements denying that the party happened in the first place.

The FBI did interview Deborah Ramirez, the second woman who accused Justice Kavanaugh of sexual assault, but conveniently ignored the 20 witnesses Ramirez and her legal team provided. It never interviewed Julie Swetnik, Kavanaugh’s third accuser, either. This suggests the FBI didn’t take subsequent allegations of sexual assault against Kavanaugh seriously.

The FBI didn’t delve into Ford’s evidence either, glossing over several witnesses suggested by Dr. Ford’s lawyers and Kavanaugh’s roommate at Yale, who claimed he was a violent drunk while in school.

Above all else, Dr. Ford and Justice Kavanaugh themselves were not interviewed by the FBI. This matters because the Senate testimonies were muddled by partisanship and politics — but the FBI uses scientifically proven interview techniques, examining the interviewee’s body language and vocal techniques along with the words they utter.

Interviewing all witnesses could have considerably helped the credibility of the testimony — especially Ford’s. But instead, the FBI seemed to target interviewees whom they knew would side with Kavanaugh — which doesn’t tell the whole story.

One week was certainly not enough time to gather all relevant information — the FBI only interviewed a fraction of eligible witnesses.

But this isn’t the first time the FBI has conducted an incomplete investigation. When Anita Hill levied sexual assault allegations against Justice Clarence Thomas in 1991 during his confirmation process, the FBI never talked to the four witnesses who could corroborate Hill’s accusations, according to Jane Mayer and Jill Abramson, who wrote the book “Strange Justice” about Hill’s case.

According to Hill, FBI agents even misquoted her in their final report — a report that was cobbled together after a meager 72 hours of investigation. The report was clearly a tool for Republicans to smear Hill and secure Thomas’ confirmation.

It seems the FBI used Hill’s inadequate investigation as a model for Ford’s — a slap in the face to not only those two women, but every sexual assault survivor. These lackluster investigations tell women their concerns are less important than the political motivations behind confirming a Supreme Court justice.

The FBI investigation was nothing more than a pacifier for Democratic senators and the American public, something to point to in order to legitimize Justice Kavanaugh’s seat on the Supreme Court. It was clear from the moment Trump approved only a one-week investigation that he never intended for any real evidence to be uncovered.

The interviews concerning Ford’s sexual assault allegations were rushed and lacked depth. There’s no benefit to being quick rather than thorough when considering a position of this magnitude.

We can never allow ourselves to be this complacent when investigating any sexual assault investigation — especially when it’ll potentially influence the country’s political scene for decades.

Write to Allison at [email protected]