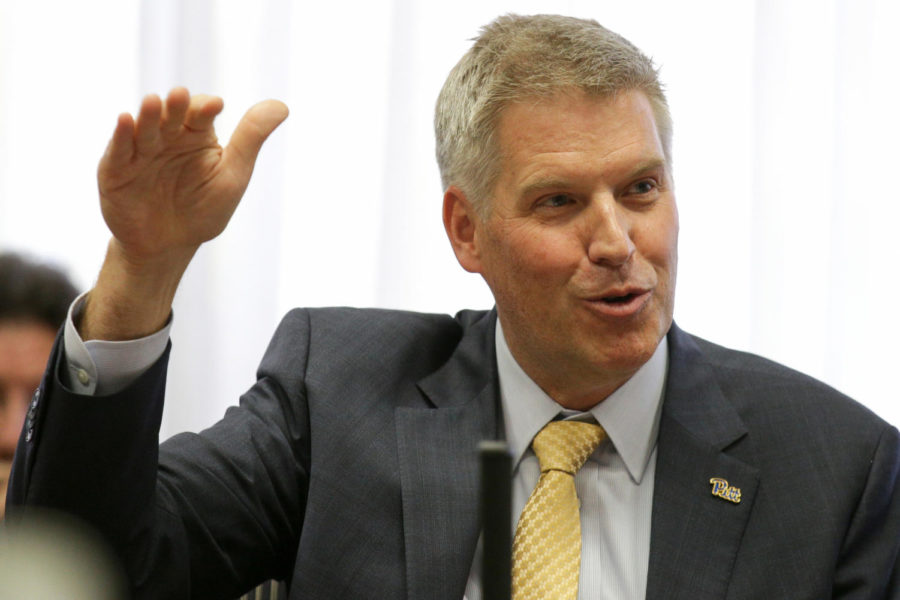 Graduate students testified for their right to unionize last week during public hearings in front of the Pennsylvania Labor Relations Board from Oct. 1 to Oct. 5, arguing against the University over one central question — whether graduate students are students or employees. Representatives from the Graduate Student Organizing Committee brought their questions to Wednesday’s University Senate Council meeting to ask administrators themselves.

Rachel Coombs, president of the Graduate and Professional Student Government, asked the Senate Council about shared governance, a principle which brings together the Pitt community to allow everyone from students to faculty and staff to have input on how the University is run.

Chancellor Patrick Gallagher said he thinks graduate students are just students. If they were considered employees, Pitt might not be able to offer them as much as it can when they are students, according to Gallagher.

“We think it’s best to look at them as students because that’s why they are doing this work,” Gallagher said after the meeting. “There’s mechanisms to support them in that context, and there could be unintended consequences if they are viewed at just a pure employment perspective.”

The University petitioned the PLRB for the hearing because it doesn’t believe the graduate students are employees.

“The hearing is necessary to determine whether our graduate students are considered employees,” Pitt spokesperson Joe Miksch said.

The hearing has not yet been conclusive, and Coombs said there will be extended public hearing days, though dates and times haven’t yet been determined. She’s hoping to see similar results from other union hearings across Pennsylvania universities.

“I am very disappointed that the University is using resources to argue a point that has already been ruled on by the [PLRB],” Coombs said, citing a 2016 Penn State case and a 2001 Temple University case, both in which the PLRB ruled in favor of graduate student unions. “The decision to unionize should be up to the graduate students.”

The Graduate Student Union wasn’t the only item on the agenda this meeting. Senate Council members also discussed the Campus Master Plan, which the University released a first draft of so the public could give input and suggestions.

“From my perspective, the entire value of a master planning process is to collaborate,” Gallagher said. “If we just had to think about ourselves and just do it, we wouldn’t bother, right? But the whole idea is to be, ‘This is what we are thinking about, this is what we think matters.’”

Selected by a committee of University faculty and staff, the Senate Council also presented the University Prize for Strategic, Inclusive and Diverse Excellence — UPSIDE Award — to the Office of Human Resources for its Career Transition project. Gallagher explained why he thought it deserved the award.

“I thought it was representative of the goals of the [Career Transitions project],” Gallagher said. “We’re not trying to just celebrate great programs or making a difference but, frankly, we want to hold them up as a model so others can emulate, and I thought this program was both.”

“What you are talking about is almost a permanent, physical infrastructure in that community,” Gallagher said. “You wouldn’t want to do that if you weren’t doing a lot in those areas.”

The center will act as a community hub for a variety of activities, including job fairs and discussion groups. Pitt already has a relationship with the Homewood community thanks to programs like Swanson School of Engineering’s Manufacturing Assistance Center.

“Universities have obligations to our students and to our people to prevent harm whenever possible,” Bonneau said. “We want to create an environment where the educational environment is foremost, and we know a lot about the dangers in engaging in the use of tobacco.”

“Many people are silently struggling with different aspects of their mental health and we want to help break down that stigma and open up conversations of awareness,” Kennedy said. “Increasing awareness can help people feel less alone and can help us all connect each other to resources and networks for self-care.”

Correction: This story has been updated to clarify the purpose of the hearings and the definition and importance of shared governance.