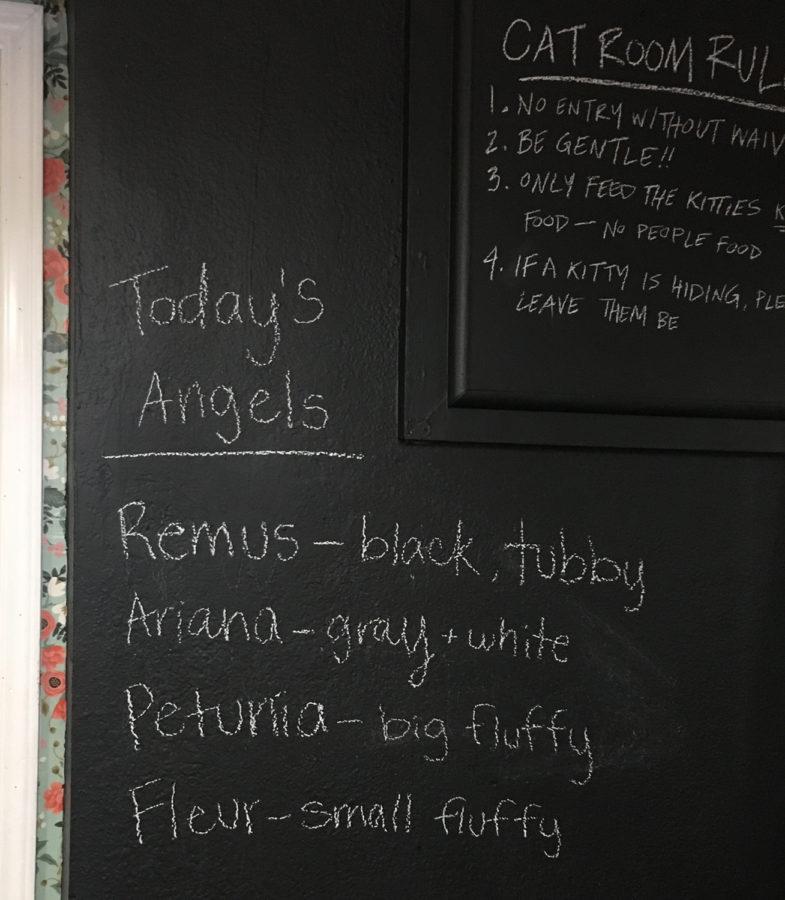 Near the entrance of The Black Cat Market in Lawrenceville, Sadie Shoaf and Dave Watt painted abstract patterns of pastel on vintage shoes. Acrylic paints and supplies sat on the table in front of them as they focused in on the task at hand — working life back into old pieces of clothing.

Next to the pair of artists hung several racks of their repurposed clothing. Some of the flashiest pieces were leopard print bell-bottoms, sequin shawls and cowboy boots painted with bubblegum pink rabbits. The designs had a sort of Alice-in-Wonderland aesthetic — each piece was adorned with pops of bright color and unique creatures.

Shoaf and Watt are two of five members of Three Pigs Vintage, a fashion collective which on Saturday co-hosted a collaborative Halloween-themed pop-up with the Lawrenceville cat cafe Black Cat Market. The cafe, founded in 2014 by Olivia Ciotoli and Indigo Baloch, serves coffee beverages and offers several pet therapy sessions for the Pittsburgh community.

The event, which was from 4 to 8 p.m. on Saturday, was advertised on social media as an opportunity for a vintage costume try-on, a handmade backdrop for attendees to enjoy selfie opportunities, snacks, drinks and live art.

Shoaf and Watt were there to share some of their latest pieces and spread the word about their new storefront studio space that will soon open in Lawrenceville. The Halloween pop-up was the perfect place to advertise their pieces, as a lot of their art includes skeletons and other spooky Halloween imagery. The two were also taking on a new style of art, which Watt was excited about.

“When Sadie asked me to paint clothes, I jumped on it. It’s a lot different from painting on flat canvas,” Watt said.
There were bedazzled painted mannequins on display, which offered an intriguing contrast to the tables of cat food and pastel pet carriers in Black Cat Market. Halloween candles emitted pumpkin spice aromas, and some attendees sipped coffee and tea drinks at a small table near the market’s entrance.

Three Pigs Vintage — a fashion and art collective formed in 2014 — creates looks inspired by fashion trends from the 1960s onward. Shoaf, the founder, met Watt at Runaway Studios in Bloomfield, where she used to work. Shortly after meeting Watt, Shoaf asked him to paint with her. At the time, she was looking for people to build a fashion collective — she wanted to make fashion a communal effort.

“I started repurposing clothes in high school. I love bringing clothes back to life and going against the fast fashion cycle,” Shoaf said.

At Three Pigs Vintage, artists add more personal life and character to their clothing pieces since they’re not mass produced. That element of customization makes things more fun for the artists.

“It’s really rewarding to repurpose new things that might have otherwise been thrown away. It’s like you’re giving it a new life almost,” Watt said.

Three Pigs Vintage will host an opening Oct. 27 for their new store and studio space in Lawrenceville. The opening will be a Halloween party at 5218 Butler St., just a couple of buildings down from The Black Cat Market.

A cat cafe might not be the most typical location for a Halloween-themed pop-up store. Cat cafes are relatively new to the United States, stemming from cat cafes in urban areas in Japan and Taiwan.

When co-owner Baloch — a 2017 graduate of Chatham University — studied abroad in Japan and Taiwan she encountered a lot of pet cafes and took a strong liking to the idea. She visited somewhere from 15 to 20 cafes, many of which were home to less common pets like owls and snakes.

“When cat cafes first began in Japan and spread to Taiwan, it was an opportunity for people to interact with animals, since they can’t have them in their apartments,” Baloch said.

When the concept spread to the United States, more of an emphasis was placed on cat cafes serving as adoption centers. Baloch and Ciotoli latched onto this element in particular since they have a deep passion for mental health and non-traditional therapy practices.

Baloch and her co-owner Olivia Ciotoli organized therapy sessions that would help people work through mental and physical health issues things like grief, PTSD and trauma from assault and domestic violence.

Although the cats at Black Cat weren’t roaming around during Three Pigs Vintage’s show, they were visible through a large glass window. The window is a measure required by the Allegheny County Health Department, as a way to keep the animals away from any food or drink preparation going on in the main room. Guests could venture inside and pet the felines as they pleased.

The market rescued Remus, Ariana, Fleur and Petunia from Frankie’s Friends, a veterinary clinic in New Kensington. They first heard about Frankie’s Friends through Humane Animal Rescue, and have been rescuing and holding therapy sessions with their cats ever since.

Prior to finding a space, they hosted pop-up events. One of their biggest pop-ups was for Sexual Assault Awareness Month. It was a coffeehouse where people could share art and writing they created during and after painful experiences.

Baloch feels lucky to have had the opportunity to host that pop-up as well as past ones, stating that events like this weren’t always possible at Black Cat Market and that they are thankful for their recent success. She and her co-owner are looking forward to expanding and hosting more events.

“Now we at least have the doors open and the lights on, and we’re getting money in the door that we can keep putting aside to make those changes that the city wants us to make, in order to get to that point,” she said.