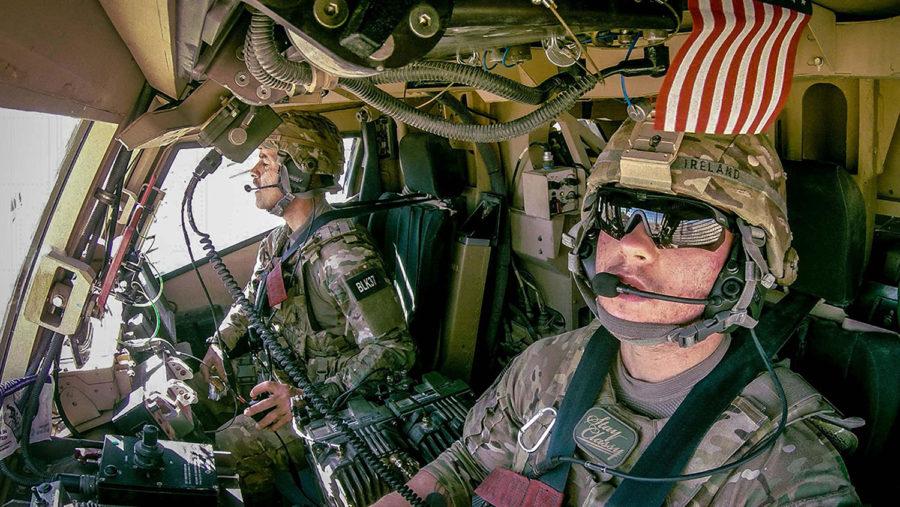 TransMilitary — a feature-length documentary about trans service members in the U.S. military — was screened at Pittsburgh’s Reel Q film festival.

A mass group of film lovers waited outside the screening room at the Harris Theater in downtown Pittsburgh this weekend in anticipation of one of the longest-running film festivals in the City. Feature films and short films alike were shown at the Reel Q International Film Festival, which was sponsored by the Pittsburgh Lesbian & Gay Film Society.

This year marked 33rd annual run of Reel Q. The festival kicked off with feature film screenings on Thursday and finished up with shorts on Sunday. Many films were featured throughout the weekend, including comedic films — like “Lez Bomb,” which CMU alum Jenna Laurenzo wrote, directed and starred in — and a documentary called “TransMilitary,” directed by Gabriel Silverman and Fiona Dawson.

“We usually do men’s shorts, women’s shorts, trans’ shorts and hour-long shorts to encompass all non-binary films,” TJ Murphy, Reel Q’s director of programming, said. “And this year we decided that was starting to get a little outdated and we wanted to open things up a little bit and definitely just do some fun, themed programs.”

The festival traditionally lasts ten days, but with the closing of the Melwood Screening Room this past summer, the event was limited to one weekend wrapping up on Oct. 14. In addition to “Fun in your Shorts, Shorts,” the weekend also featured two other series of shorts titled “Trans-tastic! Shorts” and “Face Your Queers,” highlighting more inspirational shorts.

Rather than feature short programs categorized by gender or sexuality, the production team at  Reel Q was excited to feature a general amalgamation of funny short films for “Fun in Your Shorts, Shorts.” The shorts ranged from serious political issues with hard punchlines, like in “Waffles,” to bizarre and hilarious bits, like “Dropping Penny.”

The first of Sunday’s shorts, “Waffles,” opened with a young woman lying in bed, urgently swiping through her phone. An older woman lay beside her. As the two began to wake up, they argued over the older woman’s infidelity to her husband. The audience later finds out that the younger woman discovered her lover was a lawmaker who continually passed legislation against the LGBTQ+ community.

“Dropping Penny” featured a couple of dog walkers on their adventures to return a little Boston terrier, Penny, home for her TV show “Femme Court.” Penny, dressed up as a judge, proceeded to preside over a case in which a chihuahua’s caretaker gave her the wrong pedicure. But during their attempt to rush Penny home, the dog walkers meet other femmes who they attempt to flirt with.

As the audience settled down from their laughter, the next film, “Foxy Trot,” began to roll. The film discussed a quarreling lesbian couple that attend a ballroom dancing course. In an attempt to address the pressures of society on gender identity in lesbian relationships, the film poked fun at the classic gender roles of male and female that ballroom dancing is restricted to. Through the class, the couple is able to break through the heteronormative standards placed on them, and find resolve in their love for each other.

Anusha Srinivasan, the contributing editor for “The World of Apu” — a multilingual film magazine based in Pittsburgh — who attended the event, felt that this reflection on society was important for discussing LGBTQ+ issues.

“One aspect is that when someone from the minority group watches something they’re familiar with on the big screen, it gives you a sense of feeling like you belong in this world and your stories are worth telling too,” Srinivasan said. “The other aspect is it’s good exposure for other people who don’t belong to these minority groups, and it helps them to know and understand another lifestyle and culture.”

The films in “Fun in Your Shorts, Shorts” attempted to do this by telling stories of real LGBTQ+ experiences. For example, “Double Booked,” a short that featured a bisexual woman who felt forced to make a choice between men and women, highlighted the troubles that LGBTQ+ people face in a heteronormative society. Films like these provided viewers who may not be bisexual with the opportunity to understand the experiences these people face, even in seemingly simple situations.

Others, like “Sherlock Holmes and the Adventure of the Furtive Festivity” — a twist on Arthur Conan Doyle’s iconic series in which Watson and Holmes are a gay couple — celebrated the beauty of LGBTQ+ relationships.  Following the screening of her film, director Mina Hoffman spoke briefly to the audience to offer her appreciation for the space that Reel Q provides.

“It’s always a really wonderful experience when we can come to a festival like this and be surrounded by people like you who understand and accept and who are proud to support the arts,” Hoffman said.

The attendees and board members of Reel Q are excited to have such diversity in their films and to be drawing in new audience members every day. Ultimately, Murphy feels that Reel Q develops a mutual love for the arts that can bring everyone together — both those in the LGBTQ+ community and those who identify as heterosexual.

“I feel like that’s definitely something that we get comments on here,” Murphy said. “You know you’re always meeting new people. You already have a lot in common because you both have a love for movies!”

Mara Rago, a board member for Reel Q, noticed that in the years since the film festival began, attendance has fallen. She recalls in the ’80s and ’90s when the line into the theater would wrap around the block, but in recent years the festival hasn’t drawn such large crowds. By increasing diversity, Rago hopes that Reel Q can draw more membership.

“I want to see it thriving again!” Rago said. “I think we try to target all of the LGBTQ+, all of the letters that are involved, in our movies. We try to get a little bit of everything.”