Takeaways from Pitt’s near upset of Notre Dame 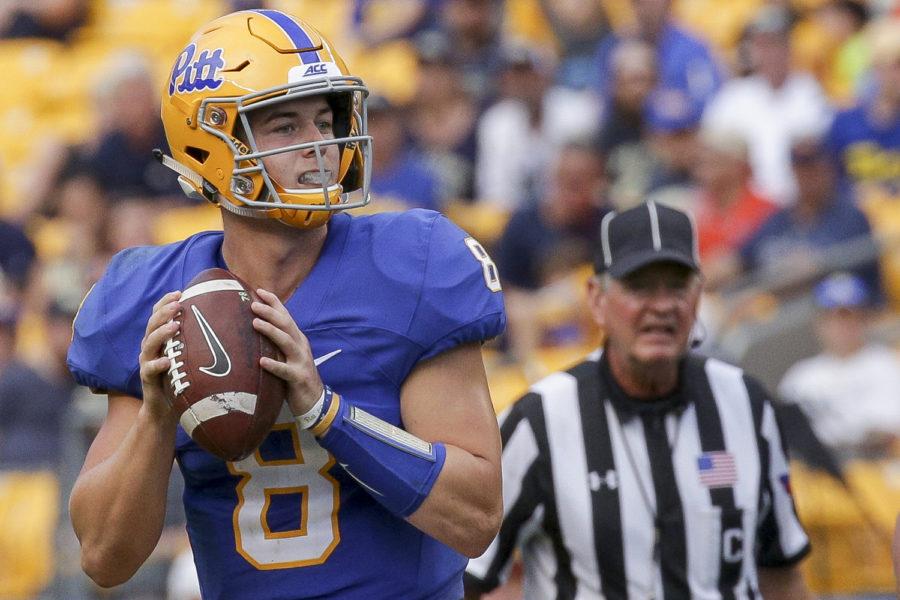 The 61-year-old Whipple, who brings almost 40 years of coaching experience to the table, will look to mentor quarterback Kenny Pickett (pictured) in an effort to revitalize Pitt's 92nd-ranked offense.

The Pitt football team nearly pulled off one of its signature upsets in South Bend, Indiana, on Saturday, as the Panthers came up just short of beating the Fighting Irish, 19-14. Notre Dame remained unbeaten at 7-0, while Pitt fell to 3-4 overall heading into its bye week.

While the season is halfway over, it’s still quite difficult to accurately describe this football team and predict what areas they’ll be successful in from week to week. Here are three takeaways from Pitt’s narrow loss to Notre Dame.

Last week, Alex Kessman turned heads at Heinz Field with his ability to boot the football through the uprights. Kessman aced all three of his field goal attempts, the shortest of which was a 45-yard attempt with fewer than 10 seconds on the clock to send the game into overtime. Kessman also found a place in the Heinz Field history books when he drilled a 55-yard field goal, the longest kick ever made there — college or pro.

The Panthers could not have prevailed last week without Kessman, but this week his play was absolutely detrimental for Pitt against the Fighting Irish.

Kessman missed two field goal attempts, which would have secured a one-point win for Pitt. The sophomore shanked a 47-yard attempt wide left in the third quarter and a 36-yard try wide right in the fourth. Both misses caused long Pitt drives that chewed up clock time to come up empty.

On one hand, a 47-yard field goal is no guarantee in college or the pros. But a 36-yard kick is a little harder to excuse, even if Kessman was playing in one of the most important, closest games of his life. The Panthers certainly should have put more points on the board and there are no scenarios where this loss is solely on the kicker.

The hallmark of a good kicker is consistency, and Kessman proved that he might not have that aspect of the position down yet. The pressure of the game may have gotten the best of him, but a truly good kicker shakes that off, too.

Kessman clearly has the talent to do big things. However, it’s still a little too soon to tell if he’ll come through consistently or in big moments to truly label him a good kicker.

This week Pitt’s normally subpar defense silenced the critics — The Pitt News included. The Panthers held Notre Dame to 19 points, its lowest total of the season. This was without captain and linebacker Quintin Wirginis, arguably the unit’s best player.

The Panther defense held off Notre Dame’s ground game especially well Saturday. Tailback Dexter Williams, who ran all over Stanford and Virginia Tech, finished the day with a mere 31 yards. Aside from Williams, the entire Fighting Irish offense only put up 80 rush yards. Pitt has shown flashes of strong run defense, and this week it all came together and helped keep the game close.

Pitt’s defense also put up a much better fight defending the pass than usual. The secondary recorded two interceptions and the front seven gave their teammates a ton of help. Pitt recorded three sacks and put pressure on Irish quarterback Ian Book all game. The pressure definitely forced Book into bad throws on his two picks.

The game plan for this contest was also well thought out. Defensive coordinator Randy Bates pressured Book all game, from different places and at different times, and it worked well. This strategy, paired with an incredibly hard-fought game from the players on the field, meshed well to limit Notre Dame’s offense.

It was strange to see a defense that couldn’t even contain UNC go play-for-play with one of the country’s best teams. The defense’s performance against Notre Dame should show the coaching staff that they need to be this aggressive with their game plan and play calling every week.

Either way, the players deserve a ton of credit. They lost their captain this week and were still able to come out and play the way they did. Despite constant criticism, the unit showed that it has potential and may be improving. Even if this turns out to be a one-week fluke, it’s still evidence that the defense has the ability to compete against almost any team out there.

Pitt’s sophomore quarterback simply might not be the solution. Already halfway through the season, Pickett hasn’t put up a good statline. And while Pickett hasn’t lost any games for Pitt, he certainly hasn’t won any for the team either. A steadier performance against UNC might have resulted in a win, and there’s reason to believe Pitt could have pulled off the upset this week had Pickett done more.

Pickett didn’t throw a touchdown and didn’t make any huge plays this week. While he didn’t turn the ball over, he didn’t do much to help his team in a game where the defense was doing everything they possibly could.

The sophomore has yet to pass for over 200 yards and has only six scores in seven games. Most games, his stats are inflated by one or two big plays, and without them, he wouldn’t have even topped 100 yards.

But the play calling leans towards the run with senior tailbacks Qadree Ollison and Darrin Hall in the backfield. Against Syracuse, the coaches refused to let Pickett throw with the game on the line. There are many instances where the line gives Pickett no time to throw, but there are also instances where he’s taken sacks when he should have thrown the ball away.

Teams in the ACC need a playmaker quarterback to have sustained success and compete with the big programs. There are many circumstances and reasons that Pickett hasn’t put up numbers — but despite that, the numbers definitely aren’t there.

Pickett still has plenty of time to change minds. It’s only halfway through his sophomore year, and even if his play doesn’t pick up he’ll still likely get much of his junior year to keep his job. But if 130-yard, no-touchdown games like this week and a few other games this season become a recurring theme, Pitt’s seemingly endless search for a QB will continue.