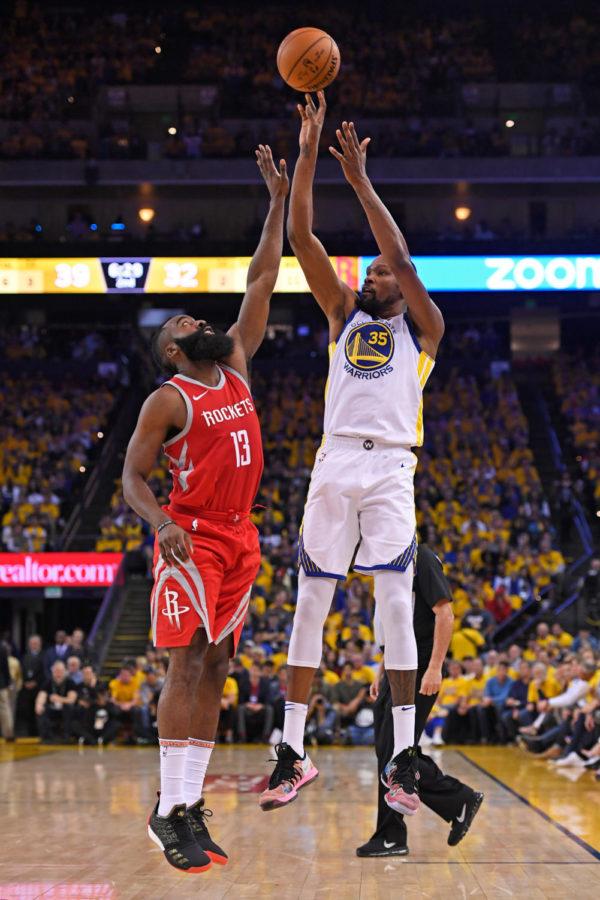 After a roughly five-month break since the Golden State Warriors swept the Cleveland Cavaliers in Game 4 of the Finals, the NBA is finally back. The 2018 season opened last night with the league pitting two in-conference rivals against each other in the Warriors and Oklahoma City Thunder, along with the Boston Celtics and Philadelphia 76ers. In honor of the season’s return, here’s a look at the league’s current hierarchy.

In the American criminal justice system, the defendant is innocent until proven guilty. Similarly, in the NBA, the Warriors are the assumed champions until proven otherwise. The team won its third title in four years last season, then added four-time All-Star DeMarcus Cousins to a team that features four All-Star players in Steph Curry, Kevin Durant, Klay Thompson and Draymond Green. Cousins will miss the majority of the season rehabilitating the Achilles he tore in January, but when he returns, he will add another level of star-power to a lineup already considered unbeatable.

But the Rockets and Lakers will do all they can to prevent the Warriors from making a fifth-straight NBA Finals appearance. Houston came within one half of toppling Golden State in Game 7 of the Western Conference Finals last season, only to come up nine points short. They should be a top team in the league once again under reigning MVP James Harden and nine-time All-Star Chris Paul.

The Lakers only won 35 games in the 2017-18 season and feature a core composed of second- and third-year players with no playoff experience. But there’s one simple reason Los Angeles should be expected to compete with the best of the West this season — LeBron James. Adding one of the greatest players of all time drastically improves the prospects of any roster, and despite their youth, Lebron will carry the Lakers deep into the playoffs in pursuit of his ninth-straight Finals appearance.

Now, calling these teams “Pretenders” in the context of these tiers is not an insult. They’re all very good, competitive teams — but at the end of the day, there’s a roughly zero-percent chance that you will see any of them in the Finals. This isn’t college basketball, where you can count on upsets to occur throughout a bracket of single-elimination games. The better team nearly always emerges over the course of a best-of-seven series, and the top-tier teams in the West should maintain dominance over this lesser domain.

With that being said, the San Antonio Spurs will always be a threat under legendary head coach Gregg Popovich. The Thunder rid themselves of the blight that is Carmelo Anthony, and the tandem of Russell Westbrook and Paul George should only improve in year two. Utah is a trendy pick for pundits due to head coach Quin Snyder’s brilliance and the emergence of young guard Donovan Mitchell as a superstar talent in his first year. Portland’s elite backcourt duo of Damian Lillard and C.J. McCollum will do as they do every year — get into the playoffs, then get eliminated in the first two rounds. The Pelicans quietly boast a loaded roster that includes an MVP-favorite in Anthony Davis, a top-tier guard in Jrue Holiday, a sharpshooter in Nikola Mirotic and a scrappy playmaker in Julius Randle.

These will be fun teams to watch and monitor throughout the season. Just don’t expect to see them playing in June.

In this tier, you will find the teams that aren’t nearly talented enough to contend for a championship, yet not bad enough to earn a top 2019 draft pick by losing a ton of games. These organizations find themselves at crossroads in this upcoming season, torn between decency and inadequacy.

Minnesota made the playoffs as an eighth seed last season, but has become what some might call a dumpster fire in the offseason due to Jimmy Butler’s dissatisfaction with his younger — and in his opinion, lazier — teammates. Denver and Los Angeles will hover around .500 while the Grizzlies should rebound on last year’s 22-win season with a healthy Mike Conley and Marc Gasol.

These teams all finished in the basement of the West last season, but have used their high draft picks to stockpile some of the most enticing talent in the league.

The Suns finished dead last in the West the past two seasons, but it would be hard to imagine that happening again. Now in his fourth year, 21-year-old Devin Booker could be one of the top guards in the league if he can improve upon last year’s 24.9 points per game. He’ll get some help from 2018 No. 1 draft pick DeAndre Ayton, who is a physical freak at 7-foot-1, 250 pounds. The Kings also possess a promising big man in No. 2 pick Marvin Bagley III out of Duke, who will play alongside two of last year’s top draft picks in De’Aaron Fox and Harry Giles.

But the most exciting prospect of this year’s draft class might be the No. 3 overall pick, 19-year-old Slovenian wonder-boy Luka Doncic. As a teenager last season playing in the EuroLeague — the second-best professional basketball league in the world — Doncic showed incredible maturity by leading Real Madrid to a championship and winning league MVP in the process. Doncic has the size of a forward at 6-foot-7 but the skills of a guard, with the ability to shoot and create off the dribble.

When Lebron left for Los Angeles this past summer, it signaled the dawning of a new era in the Eastern Conference — an era where a team led by someone other than Lebron goes to the Finals.

This is a very new and exciting proposition. Not since the 2010 NBA Finals when the Boston Celtics lost to Kobe Bryant and the Lakers have we seen a non-Lebron team go the distance in the East. For eight straight years he imposed his will on the entire conference, tallying four Finals appearances with the Miami Heat and four with the Cleveland Cavaliers.

This year, the Celtics are the favorite, considering they took the Cavaliers to Game 7 in the conference finals last season — and that was without superstar point guard Kyrie Irving or 2017 All-Star Gordon Hayward. Both these players will be back and healthy for the start of 2018.

Meanwhile, the Raptors swapped DeMar DeRozan for Kawhi Leonard this offseason, and if Leonard — who missed nearly all of last season due to a cryptic blend of leg injuries and disgruntlement with his team — can return to his peak form, then the Raptors could also make the Finals. As for Philadelphia, the 76ers will go as far as young studs Ben Simmons and Joel Embiid can lead them.

Of all these teams, Milwaukee could make the best case to be in the top tier. They have the conference’s MVP-favorite in Giannis Antetokounmpo, also known as the “Greek Freak,” a once-in-a-generation talent who has improved in every season of his career thus far. Combined with the quality track record of new head coach Mike Budenholzer and a solid supporting cast, including the ever-underrated Khris Middleton and Eric Bledsoe, the Bucks could be really good. But until they show that they can beat the best, there’s no evidence to show that they can be the best.

The Wizards are the Trail Blazers of the East. They possess an All-Star backcourt with John Wall and Bradley Beal, but lack the talent to advance in the playoffs. They also have Dwight Howard now, but so what? Likewise, the Pacers have a breakout superstar in Victor Oladipo, but will resume their role as second fiddle to the conference’s elite squads.

There’s not too much to say about this tier. They’ll all compete for the bottom two playoff spots, except for perhaps Cleveland, who could end up being in the fourth tier. It’s hard to estimate just how much the Cavaliers will fall off in the absence of Lebron, but the best they can hope for is to hover around .500.

The Pistons have the highest ceiling of this bunch, with two All-Star talents in Andre Drummond and Blake Griffin. Drummond is the best rebounder in today’s NBA, and Griffin is a diverse playmaker when healthy, which is a rarity in itself. Miami and Charlotte will be just fine — nothing more, nothing less.

For what it’s worth, the Hornets do have explosive rookie Miles Bridges, who is the best first-year player from this group. He could make the Hornets a fun team to watch, with his penchant for making plays like this:

What a putback from Miles Bridges!

These teams will not be good. And unlike the bottom-tier teams in the West, many of them don’t have the same level of young talent to make them entertaining. The Nets have the best chance to excel to the next tier, with a formidable combination of experience, ability and sound coaching from Kenny Atkinson. The Knicks might have been decent, but the loss of star forward Kristaps Porzingis to an ACL tear in February will render them unfit for success. The rest of these teams will compete for the conference’s worst record, with 2018 first-round draft picks Trae Young (Hawks), Mo Bamba (Magic) and Wendell Carter Jr. (Bulls) looking to provide some hope and highlight reels for their respective organizations.