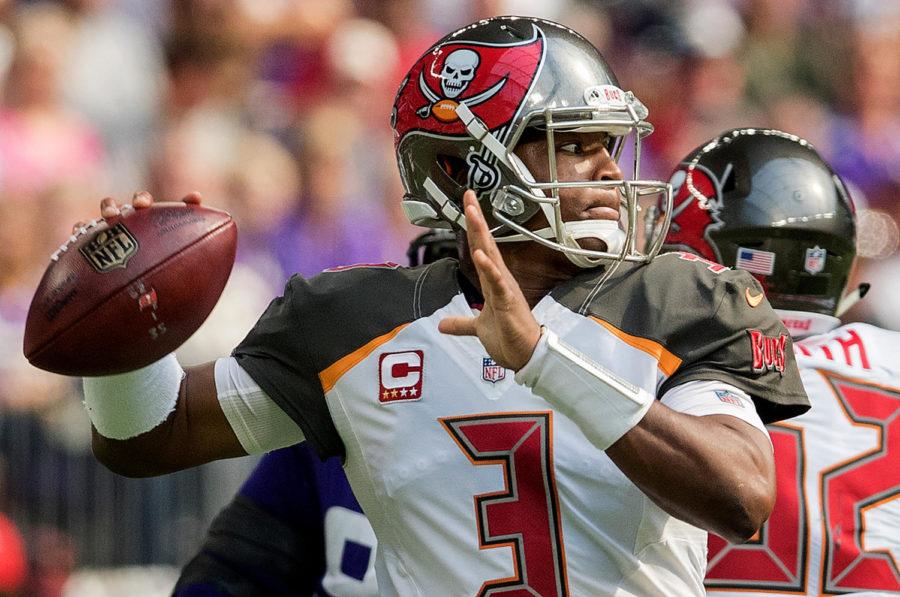 With the Pittsburgh Steelers, Green Bay Packers, Oakland Raiders and Seattle Seahawks on a bye this week, many fantasy owners are scrambling for players to fill roster positions. If you happen to own Ben Roethlisberger, Antonio Brown and James Conner, fear not — these players should be able to fill in admirably in the NFL’s Week 7.

*The %OWN statistic is based on ESPN standard leagues from Oct. 16.

Winston took back the starting job from starter Ryan Fitzpatrick mid-game in Week 4 but struggled in the debut, throwing two interceptions and one touchdown. However, that was more a result of the tough matchup against a stout Chicago Bears defense. After a bye week, Winston torched the Atlanta Falcons last Sunday to the tune of 395 yards and four touchdowns, although he did add two interceptions. If you need to add a quarterback off waivers because your regular starter is on a bye, Winston is your best bet, with a home matchup against a Cleveland Browns defense ranked 27th in pass-pressure rate generated since Week 4.

Since his electrifying debut against the New York Jets in Week 3, Mayfield hasn’t necessarily lived up to expectations, averaging a pedestrian 14.37 fantasy points per game. But his next game presents a dream matchup against the last-ranked Tampa Bay Buccaneers defense, which has been so bad that the team fired its defensive coordinator after five games. They’ve allowed an almost unfathomable 356 passing yards per game, so any opposing quarterback warrants a fantasy roster spot, and that includes Baker Mayfield.

Barber has suffered from the Buccaneers’ poor defense, with the team often forced to air it out and ignore the run game in order to stay competitive in high-scoring shootouts. But he finally broke through with a quality stat line last week, carrying the ball 13 times for 82 yards while adding four catches for 24 yards and a touchdown. He’s the lead ball carrier in the backfield and should find success once more against a Browns defense that ranks 29th in the league, allowing 138.2 rushing yards per game.

Mack was deemed the Colts’ starting running back entering the season, but missed four of six weeks due to a hamstring injury. He returned last game against the New York Jets, leading the backfield with 12 rushes for 89 yards, averaging an efficient 7.4 yards per carry. He’s the most talented of all Indy’s running backs and should lead the team in carries this week against Buffalo. The Bills are one of the worst teams in the league, so if the Colts take a sizeable lead, they’ll lean heavily on Mack to milk the clock.

In his first season in Chicago, Gabriel showed promise early on by catching at least four passes in each of the team’s first three games, but never eclipsed the 34-yard mark. That all changed with a seven-catch, 104-yard, two-touchdown breakout performance in Week 4 against the aforementioned putrid Tampa Bay secondary. Gabriel showed that wasn’t a fluke by catching five passes for 110 yards last week. Regardless of the matchup — which happens to be against the New England Patriots this week — Gabriel should be rostered in most leagues as a consistent pass-catcher and quarterback Mitch Trubisky’s favorite deep threat.

Kearse is hardly rostered in any leagues, but deserves ownership over the next couple weeks. Due to an injury to the man above him on the depth chart, Jets’ leading pass-catcher Quincy Enunwa, who left Sunday’s game with a high-ankle sprain, will miss up to four weeks. Kearse stepped up as quarterback Sam Darnold’s security blanket, catching nine passes for 94 yards. In Enunwa’s absence, Kearse could see a similar workload, which means it would be wise to add him as soon as possible, even with a matchup against a formidable Minnesota defense this week.

Howard faces in-house competition from Tampa Bay tight end Cameron Brate, but still maintains fantasy relevance due to his top-notch athleticism and solid rapport with quarterback Winston. In Winston’s first start of the season last week, he found Howard four times for 62 yards and a touchdown. Since it’s the Buccaneers, they’ll likely throw the ball a ton again versus Cleveland this week and Howard should find himself as one of they key beneficiaries.

This marks Uzomah’s second-straight appearance in this column, as he became the Bengals’ No. 1 option at tight end after Tyler Eifert suffered a season-ending broken ankle in Week 4. Uzomah played well in his first start, catching six passes for 54 yards. He has a great matchup this week against a Kansas City defense that rivals Tampa Bay’s for being the league’s worst, so expect Uzomah to catch at least five passes once again.