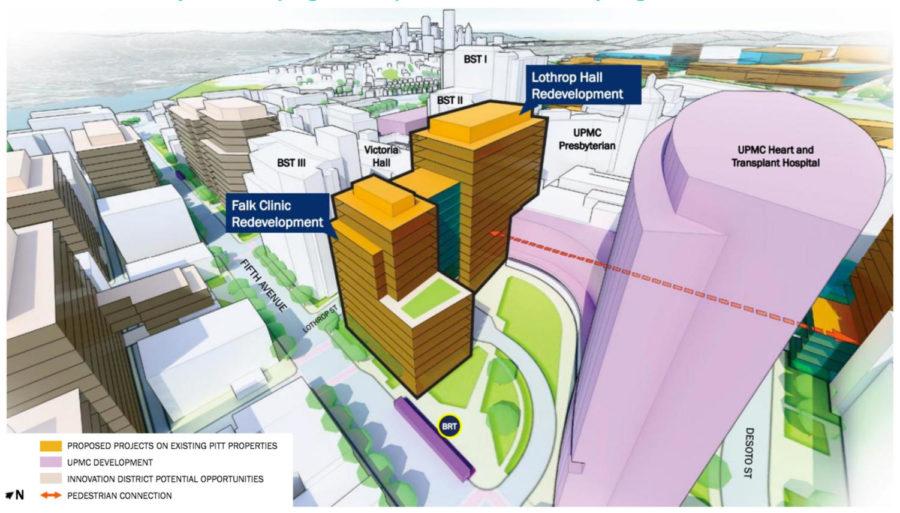 By Dylan Giacobbe, For The Pitt News

Innovative health treatments could be coming to Oakland as soon as 2023 — but some Oakland residents disapprove of the buildings coming with it.

UPMC organized an informational presentation to the public about its proposed Heart and Transplant Hospital at UPMC Presbyterian at the Oakland Career Center on Tuesday night. The event focused on providing information about the architecture and benefits of the planned UPMC Heart and Transplant Hospital. The presenters allowed for open questioning from the more than 15 audience members in attendance, most of whom were Oakland residents, according to the sign-in sheet at the entrance.

UPMC announced a plan in November 2017 to build three new specialty hospitals — a heart and transplant hospital, a speciality cancer hospital and a vision and rehabilitation hospital. According to a press release from UPMC, the project is backed by a $2 billion investment from the health enterprise and is working in partnership with the University of Pittsburgh Schools of the Health Sciences.

Presentation organizers attempted to focus on the specifications of the project, but the event was guided by the community’s negative perceptions of UPMC. After consistent questioning by audience members, main UPMC event organizer John Krolicki pushed presenters through the presentation despite the frequent interruptions.

Oakland community members at the event spoke on how recent new developments from UPMC have not always been in the interest of the residents. Some residents, like Mark Oleniacz, also highlighted how in the past, UPMC had not focused on having a dialogue with residents about new projects in their community.

“Some meetings in the past have been, ‘Here’s what we’re doing’ — not so much questions or other input or changes. It’s already been done, ‘this is the plan, this is what we’re doing,’” Oleniacz said. “It’s great that they’re having this, that they seem to be more engaging with the community, you know, answering questions probably more than they may have in some other meetings.”

The new building will specialize in heart health and transplant surgery with a focus on technological advancement to bring patients closer to their treatment, including exclusively private rooms for inpatients. According to a press release from UPMC, the rooms will feature interactive touch screens in collaboration with Microsoft, which nurses and patients can use for medical evaluation and entertainment.

Some of this technology was showcased before the presentation began. Upon entering, guests were brought over to a diorama of the Pittsburgh area containing spaces where the three proposed specialization hospitals will be located. A few event staff members with iPads used an augmented reality camera function to show what the construction and finished product of these hospitals will look like in the community.

According to the presentation, the building will be designed with sleekness and nature in mind. The building will feature glass architecture within a grassy, park-like space that will be open to community events and food vendors. The interior design will incorporate an open floor plan and plants. UPMC believes the design will benefit both patients, their families and community members at large by creating an expansive, non-restrictive space for individuals.

But some Oakland residents at the event voiced their concerns with the new development and with UPMC’s continual expansion into the neighborhood.

Regardless of any negative sentiment at the event, Oakland resident Lucas Bezerra said the public forum provided by UPMC was good for the community. He said there should be more community events to give community members an opportunity to learn about their neighborhoods and voice their opinions.

“I’m really glad that [UPMC is] engaging Oakland residents. I think that this is a really positive … engagement, no matter what people say. I think that it’s really meaningful to have such a big institution actually engage with the people who are in the community itself,” Bezerra said.

Wanda Wilson, executive director of Oakland Planning and Development Corporation, said negative and positive comments are valued at events like these. Community engagement events are a chance for community members to talk about their concerns.

“Part of our role is to make sure that the community has a chance to learn about development projects and have their voice heard, have the information that they need to be informed citizens and actively engaged in the process,” Wilson said.