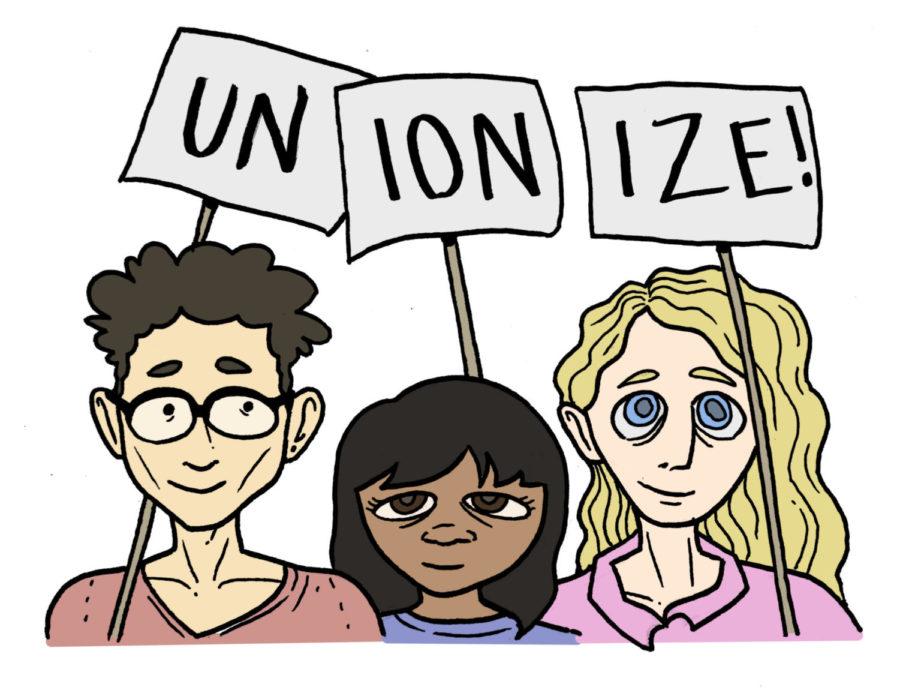 Graduate students may be here for an education, but you won’t find them thumbing through a textbook all day. At universities, including Pitt, grad students don’t just function as scholars, but employees as well.

That’s why it’s no surprise that the Pennsylvania Labor Relations Board ruled in favor of Penn State graduate students in February, granting them employee status and thereby the right to unionize. Grad students at Temple University fought the same battle in March and the board ruled in the same way — but Pitt is putting up greater resistance.

Pitt’s Graduate Student Union petitioned the labor board to hold a union election, and the PLRB hearings for Pitt began Oct. 2. The hearings were intended to decide whether or not graduate students at Pitt are considered employees, which would grant them the right to unionize. The University’s lawyers from Philadelphia firm Ballard Spahr argued that graduate students are students alone — not employees.

“We think it’s best to look at them as students because that’s why they are doing this work,” Chancellor Patrick Gallagher said after Pitt’s October Senate Council meeting. “There’s mechanisms to support them in that context, and there could be unintended consequences if they are viewed at just a pure employment perspective.”

But Pitt grad students act as employees, so they should have the right to unionize. Graduate students do the same work as other employees of the University, including teaching and research, and are compensated in similar ways — through stipends and benefits — to other employees of the University. Regardless of if the graduate students would vote to form a union or not, they are employees and should be guaranteed the right to unionize.

But this all serves as evidence that grad students are employees. Federal income taxes are collected on graduate stipends, just like they are through any other job, and the financial struggles grad students face are mirrored in other low-paying positions in higher education like adjunct faculty members.

“Graduate students on assistantships (graduate assistants) are often assigned to be teaching assistants or research assistants,” the PLRB’s report on Penn State grad student unions read. “Assistantships include a stipend, tuition remission, and a subsidy for medical insurance which pays 80% of the premium of the student health insurance plan.”

Penn State and Pitt are providing grad students with taxable income and health insurance because they are more than students — they’re employees. While health-care coverage, tuition scholarships and stipend payments seem sufficient compensation, graduate students deserve to decide if they would like a union — which would allow them to bargain for benefits if they feel their current benefits are insufficient.

“The way it is now, we have a hard time actually negotiating about our work conditions because they get muddled with our positions as graduate students, and we have no collective voice,” Ben Case, a sixth-year doctoral student in the psychology department, said in an email.

Regardless of whether the graduate students want to use union bargaining rights to obtain better compensation, the students are still paid similarly to the other employees of the University and have a right to unionize.

At the University of Massachusetts, a publicly funded research university like Pitt, the Graduate Employees Organization negotiated a 7.5 percent raise for all of its members. The raise will occur through a contract that extends from 2018 to 2020. The University of California Student-Workers Union negotiated a 3 percent yearly raise, along with a $300-per-year waiver of campus fees and $100 lump-sum payment at the end of this year. Graduate student unions at universities comparable to Pitt are able to bargain with their administrations in order to improve compensation.

Pitt has negotiating power to lose with unions — but universities, especially publicly-funded ones, have a responsibility to put their students and employees first.

They also hold research positions, which contribute to Pitt’s reputation as a research university. While research is mandatory part of many graduate programs, Pitt makes a name for itself off the backs of its student researchers, advertising its successes across all research avenues. Since graduate students’ work is integral to the University’s reputation, they should receive adequate compensation and protections — and at the very least, recognition for the work they do.

While the hearings are suspended for now because Pitt’s administration did not provide its witnesses in the time allocated by the board, Pitt grads should have a right to unionize. The PLRB has already ruled in favor of both Penn State and Temple University grads, deeming them employees eligible for unionization.

Graduate students perform essential functions of the University — they teach classes and perform research. When Pitt acts against the graduate student union, it is acting against the best interest of the very people it’s supposed to serve.