Trump mocks Ford: a tragedy for #MeToo and the country 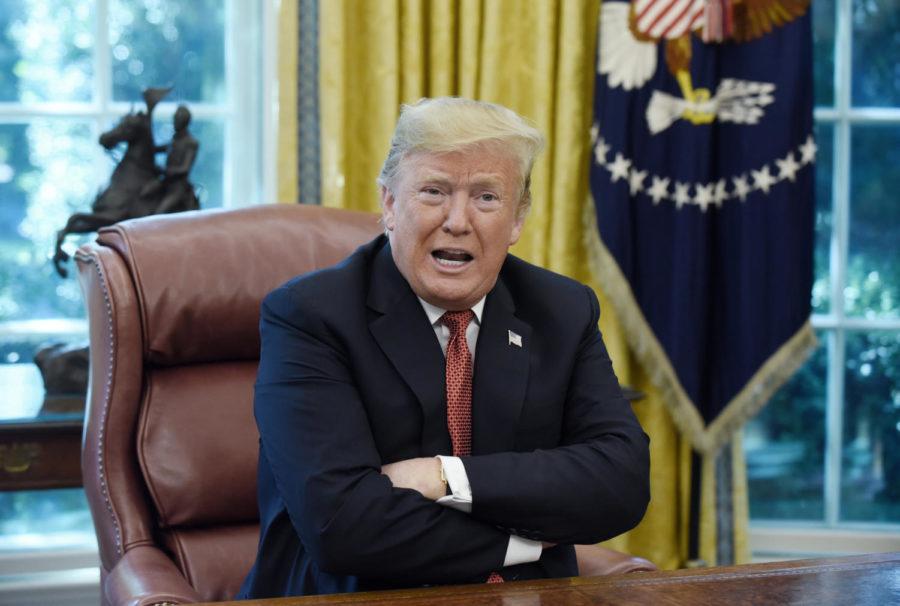 President Donald Trump speaks during a meeting with workers on “Cutting the Red Tape, Unleashing Economic Freedom” in the Oval Office of the White House on Wednesday. (Olivier Douliery/Abaca Press/TNS)

By Kelly Loftus , For The Pitt News

Celebrities took to social media to express their support for Ford. Matt Damon appeared as Kavanaugh on “Saturday Night Live.” Amy Schumer was arrested for protesting in Washington, D.C.

But one person who didn’t seem to care was our president. He repeatedly made fun of Ford for coming forward, blindly defending Kavanaugh’s integrity without giving the accusations a thought. Kavanaugh’s appointment to the Supreme Court confirms that the American two-party system prioritizes partisan loyalty over moral integrity. They don’t take sexual assault seriously.

On paper, Kavanaugh fits the job description for Supreme Court justice. He has an Ivy League education and 12 years of experience as a federal judge. But when put under the spotlight for his testimony, he cracked open as easily as one would a cold one with the boys — calling the allegations a left-wing conspiracy.

“This whole two-week effort has been a calculated and orchestrated political hit fueled with apparent pent-up anger about President Trump and the 2016 election … and millions of dollars in money from outside left-wing opposition groups,” Kavanaugh said in the hearing.

After showing he’s both strongly partisan and incapable of maintaining composure under stress, not to mention he accumulated multiple sexual assault allegations, Kavanaugh still managed to secure a spot on the Supreme Court bench. This came after several Republican senators conceded that Dr. Ford provided a solid testimony. Even President Trump said Ford was a “very compelling … very credible witness.”

But then Trump mocked Ford at a rally in Mississippi on Oct. 2. The crowd laughed and cheered as Trump imitated Ford, saying “I had one beer” and “I don’t know.”

All but one Republican senator voted for Kavanaugh’s confirmation like the obedient party members they are. It didn’t matter that Kavanaugh may have committed sexual assault, nor did it matter that he showcased a temperament more similar to a fifth grader than a Supreme Court justice. All that mattered was that the Democrats lost, even if it meant America would lose with them.

Accused of sexual assault himself, the president is notorious for making derogatory remarks toward and about women, including his own daughter. With his brand built on what supporters hail as a lack of political correctness, Trump frequently crosses into lacking basic human decency as well — as seen by his comments on Ford’s allegations.

“I have no doubt that, if the attack on Dr. Ford was as bad as she says, charges would have been immediately filed with local Law Enforcement Authorities by either her or her loving parents,” Trump said in a tweet before the Ford-Kavanaugh hearing.

It should not matter if she was reporting the alleged attack immediately or 36 years later — Ford’s accusation should be treated with respect, not bombarded with criticism from president of the United States himself.
Roughly two out of every three instances of sexual assault go unreported. Trump belittling Ford’s claims confirms the fears of every sexual assault victim in the country that even if they go through the pain of facing their perpetrator and sharing their story, they will not be believed — they will be ridiculed.

“I am not here because I want to be,” Ford said to begin her testimony. “I am terrified. I am here because I believe it is my civic duty to tell you what happened to me when Brett Kavanaugh and I were in high school.”

The nation watched as support for her swelled, as confessions from victims poured out over the internet. Then it watched as its president turned it into a joke — and as Brett Kavanaugh was confirmed as a Supreme Court justice.

According to Trump, a time in which a woman’s sexual assault allegation is taken seriously is “a very scary time for young men in America.” A very scary time indeed. Eighty-one percent of women will experience some form of sexual harassment or sexual assault in their lifetime. One out of six women will experience an attempted or completed rape in her lifetime — and yet Trump still thinks it’s men who should be scared.

The men who are afraid of the #MeToo movement need to ask themselves why they’re afraid. Women have started a conversation about something most men don’t want to talk about. A woman suffering in silence isn’t a threat, and that’s how rape culture sustains itself in American society — by keeping women silent.

Victims of sexual assault shouldn’t be disregarded, no matter how much time has passed. Allegations need to be taken seriously, whether the incident took place yesterday or 36 years ago. Laughing at a potential victim both discredits that person’s claim and trivializes the trauma caused by sexual assault.

The public’s attitude is shaped by the reactions of those in positions of power. As the leader of the country, the president is responsible for emphasizing the legitimacy of important issues.

As long as President Trump continues to undermine the validity of sexual assault, the nation will remain apathetic to victims and their stories.

Write to Kelly at [email protected].