City of Asylum residents share readings and wisdom at WPU 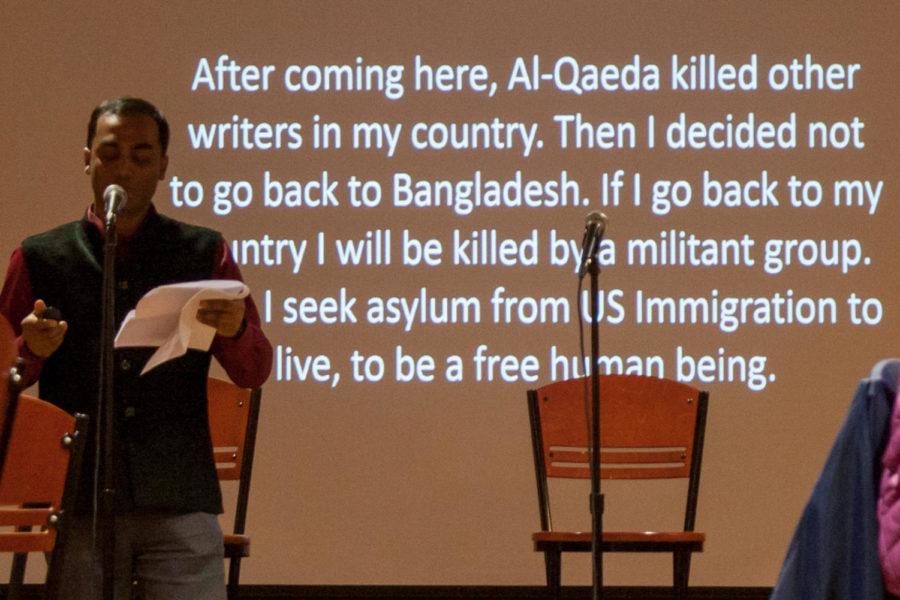 The writers — Osama Alomar of Syria and Tuhin Das of Bangladesh — are residents of Pittsburgh through City of Asylum, an organization that provides a home to authors, poets and journalists exiled from their native countries because of their writing. The two were welcomed to the University by Pitt Study Abroad Office Director Jeffrey Whitehead, who was there for the event on behalf of Pitt International Week.

The evening kicked off with a statement from Tommy Nelson, the director of external relations at City of Asylum and a former Pitt professor in the department of physics and astronomy.

“Our primary mission [at City of Asylum] is to provide sanctuary to endangered literary authors like our writers here tonight so that they can continue to write and their voices are not silenced,” Nelson said. “We’re very happy the international studies department put this together and that we can be here and have this opportunity to share what we do.”

The first speaker to take the stage was Das. Nelson introduced Das by stating that he is a “poet, activist, political columnist, short-story writer and essayist.” The Barisal, Bangladesh, native began his presentation by talking about his experiences in and exile from his home country.

Das — who has published seven books of poetry in his native language of Bengali — set up a slideshow for guests to read as he spoke through a thick accent, talking about his time growing up with Hindu beliefs in Bangladesh and his tough trials as a writer.

“Even though my family, who are citizens of Bangladesh, have shared equal rights with everyone, it became clear that we didn’t belong in our town because we were minority [citizens],” Das said. “My childhood friends all said I should leave Bangladesh and go to India and write.”

He remained in Bangladesh for some time, at first taking up writing through poetry. As he grew up, his hometown became a place of protest for persecution of Hindus and atheists by fundamentalists — and he did not shy away from it. In 2013, things started to change for Das.

“I joined the candlelight vigils and the marches and read my poetry at public gatherings,” he said. “My main goal was to speak against religious persecution.”

This got Das into hot water with his home government when he and many other activists and secular writers became targets of militant fundamentalist groups. Das made the decision to leave his country to save his own life in 2016. He has been in Pittsburgh with City of Asylum ever since.

He spent the rest of his time on stage reading some of his short stories and poetry. His final poem dealt with loneliness and looking for connections, specifically on the phone. The poem ended with the memorable line, “Will anyone call me back?”

Later in the evening, Das came back on stage to read some of his poems in his native language. Few of the audience members could understand what Das was saying, but all watched attentively as the words rolled off his tongue.

One student was excited to hear from Das, as he a fellow Bangladesh native. Zarrar Nashman, a sophomore neuroscience major, shared his positive thoughts on the representation Das brought to the evening.

“This event brought to light the different issues that surround not just one country, but many different ones,” Nashman said. “I’m from Bangladesh, so I can relate to a lot of what [Das] had to say.”

Syrian refugee Alomar took the stage after Das, prepared to read his stories and poetry. When he was first exiled in 2008, Alomar initially went to Chicago, where he drove a cab for a living. He applied for City of Asylum in 2013 and has been in Pittsburgh ever since. Alomar was exiled from Damascus, Syria, when an intelligence agency became unhappy with a piece that he wrote.

He started things off with a short story called “Human Rights.”

“Human rights decided to take a trip around the world,” Alomar said.

The story continued to tell a tale of a woman who went around the world and was wronged in many countries, her human rights violated by the unnamed “them.” Alomar read many other short stories and poems as he stood at the microphone, many of them with funny metaphorical statements.

“He sat down on his mouth and released a terrible fart,” he said.

That was a line from one of his last stories that told of a man who frequently messed up in life, but the mess-ups were represented through symbolic actions. Many guests were surprised by the comedic element in Alomar’s writing, something he was proud of integrating into his work.

His motivation for this strength and humor comes from his passion to achieve his goal — to become an established writer in America. Alomar had achieved success with his writing in Arabic while he was still living in Syria, publishing books of short stories and poems, but he is still working toward gaining that recognition in the States.

“I would say they are both very good at telling jokes already,” he said, causing laughter from the audience.

Nelson felt very lucky and happy to have the opportunity to bring the message of City of Asylum to Pitt and was thankful to get to spend time with Das and Alomar. He believes he has learned a lot with them.

“I’ve learned that people are remarkably, shockingly resilient and that you should never allow the pressures of the world to prevent you from doing what you want to do in life,” he said. “I enjoy seeing both of these guys very much and I’m grateful every day that I get to be beside people every day who show that we can all be so much better than the rhetoric we steep ourselves in every day.”