Phones are damaging our mental health 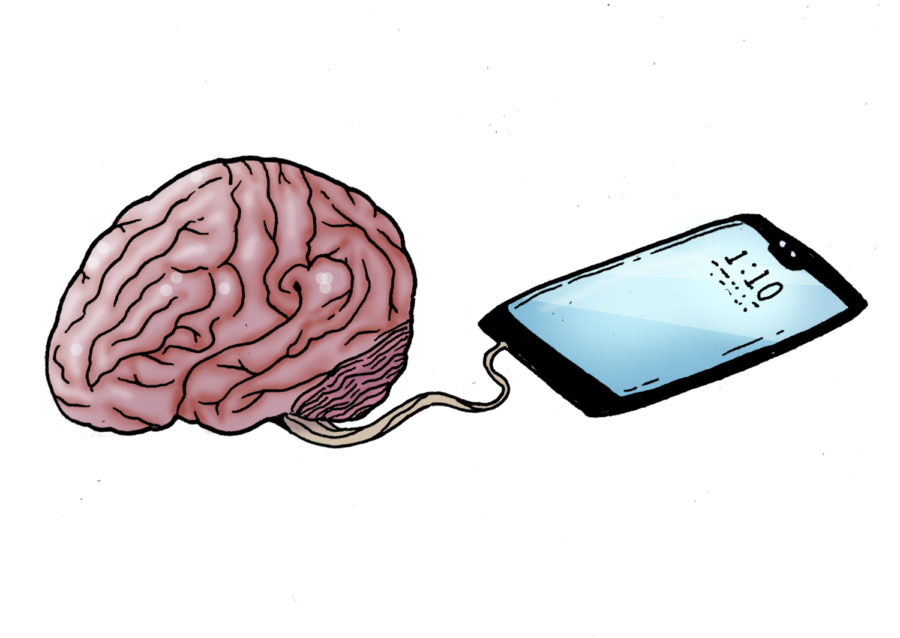 By Cammy Morsberger, For The Pitt News

We’ve all been in that awkward situation — sitting among strangers in a waiting room, boarding an elevator, standing in line at the Cathedral Cafe — in which we instinctively pull out our phones and pretend to text a friend or check Instagram. Sure, it’s more comfortable to close ourselves off from the world, to avoid boredom or uncomfortable social interaction by using our phones, but this can severely affect not only our daily lives, but also our mental health.

We live in a very connected and simultaneously disconnected world. Phones are extremely useful and efficient, but with all that power at an arm’s reach, it’s safe to say that we spend too much time looking down at them, which can have a big impact on our psyches — phone usage is closely tied to an increase in depression and anxiety.

October is Mental Health Awareness month, so it is imperative that we act to unplug our devices and not only enjoy the company of others, but also improve and support our mental well-being.
The generation of smartphone users has succumbed to the temptations of instant gratification — texts send instantly, Wi-Fi is fast, internet searches are quick and simple. It is in this aspect that many people, especially students, suffer from problematic internet use, or phone addiction.
Problematic internet use is becoming increasingly concerning, especially among university students. A study conducted in 2017 found that about 25-28 percent of college students have a phone dependency. Another research article proposes a simple questionnaire to diagnose the disorder, including questions involving increased tolerance for internet use and using the internet to relieve dysphoric mood, which includes depressive episodes, anxious tendencies or other negative emotions.

This brings up an important issue involving electronics — the more time we spend looking at a screen, whether it be a phone, laptop or tablet, the more likely we are to feel depressed. This is likely caused by the positive feeling associated with routinely checking our phones, which eventually consumes our time and causes distress, in effect worsening depressive symptoms. Jean M. Twenge, a professor of psychology at San Diego State University and author of iGen, has conducted several studies on this issue and researched generational differences since the 1980s. She notes that increased activity on any digital device results in heightened rates of depression.

“It’s an excessive amount of time spent on the device,” Twenge explains in an interview with NPR. “Three hours a day and beyond is where you saw the more pronounced increase in those who had at least one suicide risk factor.”

A recent behavioral study suggests that users of social networking sites report lower self-esteem as well as increased distress and unhappiness. These results become more drastic at over two hours of internet and social media use. There has also been an association with insomnia and smartphones, since the bright light a phone emits can disrupt our natural sleep cycle.

Not only are the related neurological effects impactful, but the cultural changes since the introduction of the smartphone are meaningful as well. While about 75 percent of 10th graders actively went on dates in the early 90s, only about 50 percent do now, which may indicate a more isolated population of teenagers since the advent of the internet.

That is to say, correlation is not causation. Twenge and other researchers linking depression or anxiety with phone use have been heavily criticized for their debatable evidence. It’s possible that depressed students are simply using their phones more than non-depressed students, or that disorders coincide with isolation and a subsequent increase in internet usage.

The data is relatively new — experts have yet to gain concrete evidence as to whether the elevated levels of depression seen in teenagers now is a result of new devices gaining ground. But the fact that this grand shift in society’s relationship with technology is occuring around the same time as the rates of depression and anxiety in our generation is increasing should not be taken lightly.

There are several ways in which we can make sure our phones don’t play a bigger role in our lives than they should, including apps like Mute, which track how much time you spend unlocking and using your phone. The app can also send you messages to motivate you to stay conscious of your usage.

Another strategy is physically separating yourself from your phone in times where you don’t need it. An hour before bed, just plug in your phone across the room so that you aren’t tempted to spend time browsing when you should be sleeping.

Powering off your phone when you’re out with friends is another helpful method — my friends and I, we call it a “phone tower,” where we stack our phones and put them aside at restaurants. I know it helps me feel more connected and engaged in conversation and my relationships.

And let’s not forget the several resources on campus, like the Counseling Center, which holds walk-in hours throughout midterms week. Whether you would like routine appointments or occasional drop-ins, the University can help you seek mental health services both on and off campus.

All these methods can help students de-stress and focus more on responsibilities and relationships. Even cutting back a little on internet time can result in a healthier lifestyle. Life can be much more enjoyable when you actually live it.

Write to Cammy at [email protected]