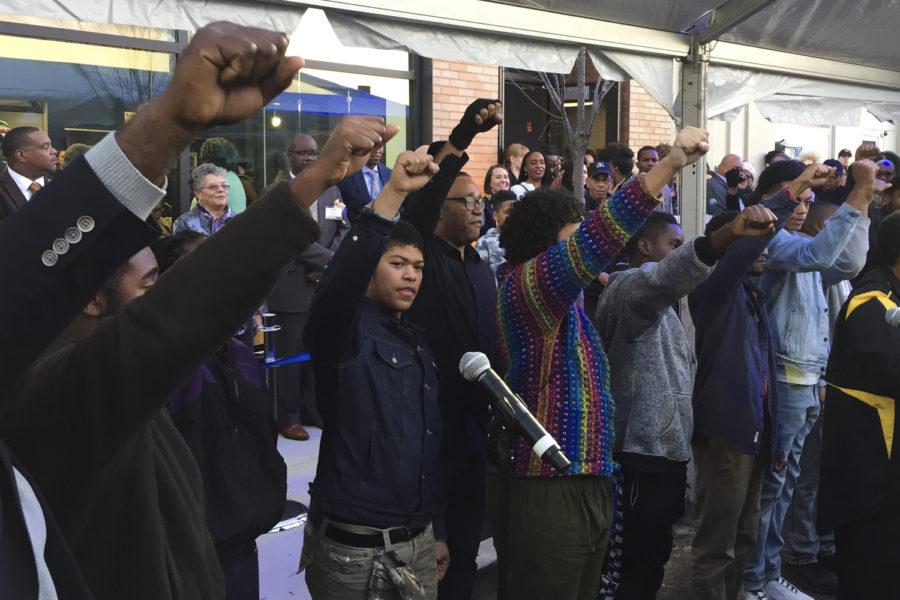 Youth members of Homewood’s Afro American Music Institute performed in front of a crowd of more than one hundred people Thursday evening.

As the sun set in North Homewood, youth members from the Afro American Music Institute performed to a crowd of more than 100 gathered beneath a tent outside. Reciting an African hymn in English, Swahili and Zulu, the group sang, “Bless, O Lord, our country, Africa, so that she may waken from her sleep.”

The energized crowd of Homewood residents, community leaders and representatives from the University of Pittsburgh congregated Thursday evening to celebrate the grand opening of the Homewood Community Engagement Center. Festivities included a ceremonial ribbon cutting, a DJ, dessert pastries, Millie’s ice cream and hot food provided by the Panther Grille.

The Homewood CEC is the first of its kind and part of Pitt’s larger plan to expand its Neighborhood Commitment project, a minimum 15-year promise to invest in infrastructure, employment and coordination in surrounding neighborhoods. There are plans to open a second center in Pittsburgh’s Hill District sometime next year.

All 16 schools at Pitt are contributing to the center’s local impact and will offer academic resources to community members with the help of collaborators and neighborhood-based Pitt staff. Pitt staff will hold some programs at the center, and students interested in community development can volunteer at the CEC.

Homewood, a predominantly black community, has struggled to reinvent itself after years of negative press concerning its homicide rate and police violence. While neighborhoods like Lawrenceville and East Liberty have seen an increase in new construction and economic prosperity, Homewood’s urban development has often been overlooked and underfunded.

Vladimir St. Surin, the assistant dean at the Community College of Allegheny County Homewood-Brushton Center, and a member of the CEC Homewood advisory council, thinks Pitt’s resources can help change that.

“The University of Pittsburgh has a lot of great resources, whether its dental, wellness, health services,” he said. “Now the community doesn’t have to leave Homewood to get those resources and get those services. And I think that’s beneficial.”

According to its website, the center will offer programs that focus on science, community research, data literacy, medication management for seniors and advice for aspiring entrepreneurs.

Some classes are available at lower cost, like a bioengineering summer camp for middle and high school students, while others are free, like iServe, a partnership with the School of Computing and Information, and PittServes, which connects students with organizations to create volunteer projects and initiatives.

During the ceremony, a number of Homewood community leaders took to the podium outside the center, including Kathy Humphrey, senior vice chancellor for engagement and secretary of the board of trustees, who served as emcee for the evening.
“We have worked for this day, we have planned for this day and we have prayed for this day for quite some time,” Humphrey said. “And I am so proud to be with you now, celebrating the people and partners who have come and who have helped us reach this moment in our community, to reach this moment in history, in Homewood, and for the University of Pittsburgh.”

Chancellor Patrick Gallagher was also in attendance and discussed Pitt’s involvement in Homewood and the greater Pittsburgh community.

“A university is not an ivory tower. A university is part of the community,” Gallagher said. “And what we are doing here today is reminding everybody, in the community and in the University, that we are actually the same thing, and we belong together working on the great challenges that we face.”

After the ribbon was cut and attendees entered the center, CEC Director Daren Ellerbee discussed the achievements the center represents, echoing the positive remarks made by Humphrey and other community leaders.

“The neighborhood is revitalizing, so in thinking about community development and the role the University of Pittsburgh can play in working alongside and collaborating with community partners, it’s a good thing for Homewood and the entire region.”

Ellerbee graduated from Pitt in 2004 with degrees in Communication and Africana Studies with a minor history. She was hired by Pitt’s Office of Community and Governmental Relations in July 2017.

She said the center also plans to focus on the student experience.

“We want to make sure our students have access to real life, real-world working experience,” she said. “And you can get that here.”

In general, residents seem to agree. Children played with arts and crafts inside the center’s main work space as students and adults alike walked around the spacious meeting rooms and hallways decorated with art made by community members.

Pamela Moore has been a Homewood resident for 65 years and is a secretary and keyboard instructor for senior citizens at CCAC. Having grown up in the struggling neighborhood, she sees the center as a beacon of hope.

“It is beautiful to bring back the community to the way it used to be. Bring the community back together,” Moore said. “Homewood is a special place.”

Correction: Daren Ellerbee was hired in July 2017, not December. The singers who opened the event were from the Afro American Music Institute. This story has been updated.