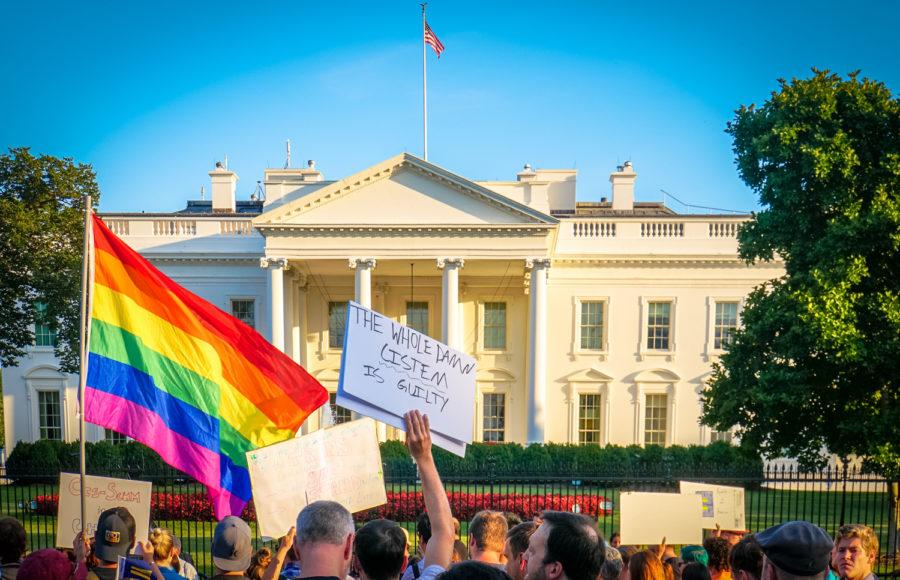 Protesters gathered in front of the White House after Trump’s proposed military ban against transgender people in the summer of 2017.

The Trump administration laid the foundation for delegitimizing the identity of about 1.4 million Americans this weekend in another attack on the transgender community. The president already approved a controversial ban on military service for transgender people in July 2017, but now his administration seems bent on legally erasing the identity of this large group of people.

According to a memo obtained by The New York Times, the Department of Health and Human Services seeks to create a legal definition of gender that narrowly defines gender as an individual’s assigned sex at birth — either male or female. This policy would eliminate federal recognition of more than a million Americans who choose to identify with a gender they weren’t born into, an alarming leap backward in the fight for transgender rights.

Since The New York Times first published its report about the HHS memo, activists and transgender people have taken to social media to post with the hashtag #WontBeErased and protestors gathered in front of the White House yesterday.

The Obama administration implemented a series of provisions that expanded the definition of gender as it applies, for example, in the fields of education and health. It allowed the notion backed by many experts that identifying with a particular gender is a choice outside of the sex we have at birth.

But HHS plans to define gender as determined “on a biological basis that is clear, grounded in science, objective and administrable.” This would mean that in the eyes of the law a person could be male or female — determined at birth based on genitalia — and immutable.

The Trump administration already rescinded Obama-era protections for transgender students that allowed students to use bathrooms that correspond with their gender identity rather than their sex. The Justice Department also rolled back policies that allowed prisoners to be assigned to facilities that match their gender identity. And there are currently two more proposals in the White House that could be affected by a changed definition of gender.

The effort to restrict the definition of gender would affect four government agencies — departments of education, health and human services, justice and labor — that enforce Title IX, the federal law that prohibits discrimination based on gender identity. This could have very real, very serious consequences for those whose identities would be essentially erased from the law.

The Department of Education is currently reviewing a proposal regarding complaints of sex discrimination in schools and colleges, and HHS is considering a proposal about federally funded health programs. If the HHS’ new definition of gender is approved by the Department of Justice, it would be applied to these proposals and any cases of Title IX — and transgender people would not receive the protection from discrimination on the basis of gender identity that they’re currently provided by Title IX.

This is an unacceptable policy for the federal government to propose, and people around the country agree. Of all the attacks on transgender rights that the current administration has made, this one is the most alarming — and could have the most damaging effects.