What readers need to understand about journalism 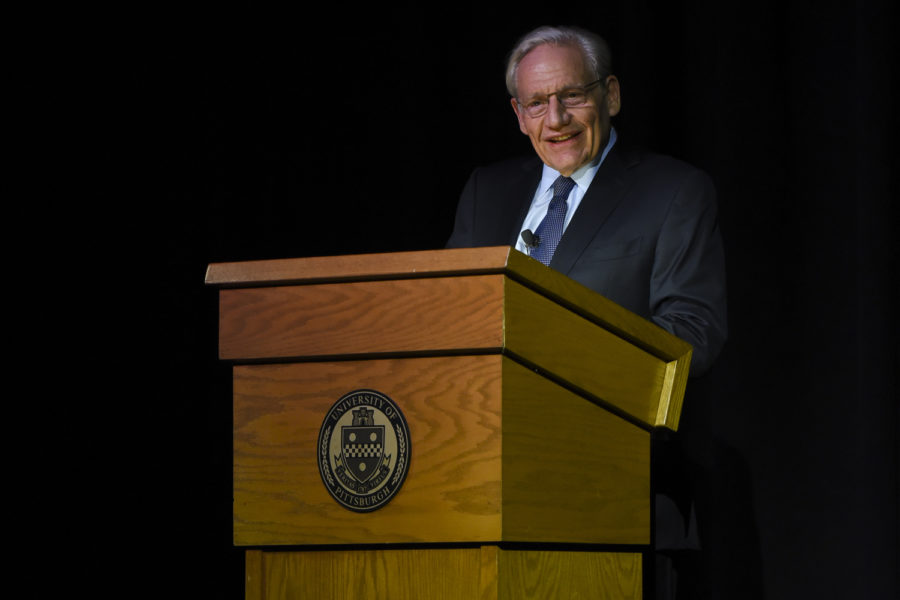 Investigative journalist Bob Woodward discussed the process of interviewing sources for his book “Fear” at Pitt Program Council’s “An Evening with Bob Woodward” on Wednesday.

Escorted by a security guard, Bob Woodward solemnly took the stage in the William Pitt Union Assembly Room on Wednesday. He talked about serious matters of politics — the state of our nation, the dangerous actions that President Donald J. Trump is taking and the competence of other members in the administration.

Yet the more important focus of his talk was his discussion of the media, and he wasn’t reserved in his critiques there, either. As a revered journalist who famously broke the Watergate scandal, Woodward knows a bit about journalism. He talked about the excitement he felt while breaking the scandal and gave advice for students interested in pursuing a career in journalism.

But he also talked about the declining public opinion of the media, especially in light of recent events. He focused specifically on the decline in trust in news sources, citing Trump’s claims of “fake news” as a major cause.

This widespread distrust poses a threat to the free flow and sharing of knowledge, and journalists need to work with the community they inform to rebuild their relationship. A healthy relationship between news outlets and community members allows people to stay informed of events — without this, the public would have no clue what goes on at the local or national level.

To be clear, “the media” is not a cohesive unit that dictates who publishes what and when. It’s an agglomeration of news outlets at all levels, from national sources like The New York Times to hyper-local ones like The Pitt News. And though these different outlets have different foci, they all have one goal in common — to report the truth and to hold people accountable for their actions.

It’s clear through an analysis of past polls that public trust in mainstream media has declined significantly. Based on annual Gallup polls, only 32 percent of Americans now trust mass media, down from more than 50 percent in 2000.

This is a sentiment shared by both parties, too — though 92 percent of Republicans believe that major news outlets sometimes report stories the outlets know to be false, 53 percent of Democrats feel the same way. For the record, those not registered with either party clock in at 79 percent.

Certainly one cause of this distrust is actual fake news on social media. Russian operatives organized a strategic misinformation campaign to influence the results of the 2016 election, which altered perceptions of important facts about the candidates. And highly partisan media, like Breitbart News Network or The Daily Beast, can reach millions of users and claim to provide news, despite extreme bias or a complete omission of other facts.

A minor contributor to this distrust is the use of anonymous sources. While anonymity makes hesitant sources more likely to talk, these sources prevent independent verification of facts by readers and other news outlets, which can decrease the trust readers have in the sources.

Woodward himself recognizes this dilemma that news sources face. While he relies extensively on anonymous sources in his new book, “Fear: Trump in the White House,” he called them one of the “poisons in the media system.”

Two percent of Americans list an article’s lack of citation of sources as evidence of distrust, indicating that it’s not that big of a deal. But anonymous sources are something Trump has pounced on as evidence of “fake news,” tweeting that when news sources “don’t name the sources, the sources don’t exist.”

Though Americans cite intentional misreporting of facts as another reason for distrust, major news outlets do not intentionally misreport facts. And when they do make a small error, they issue corrections almost immediately. The New York Times, for example, publishes a daily article containing all the corrections — most of them name misspellings, misidentification of locations or incorrect dates.

Of course, some of the burden to educate the public lies on the public itself — it must learn how to sniff out fake news and remain informed of real news. Various resources can be found at through the Center for Media Literacy, Media Literacy Now and other educational organizations that aim to teach children how to critically analyze and consume media. Adults can turn to fact-checking sites such as Snopes.com and Politifact to figure out if something really is “fake news.”

But fundamentally, recovering this trust with the community should happen through journalists engaging with the community. In an interview, Woodward said his first job at the Montgomery County Sentinel, based in a Maryland suburb of Washington, D.C., taught him that this relationship was vital to the quality of stories that they published.

“We were in touch with the community in a way that no one else from the bigger newspapers could be,” he said.

On a local level, news sources can regain this trust by providing local news coverage about important events. PublicSource, a nonprofit journalism news outlet based in Pittsburgh, has embraced this model. It focuses on holding elected officials accountable, rather than just covering sports events.

In his talk, Woodward told an anecdote about showing up at a four-star general’s house at 8:17 p.m. on a Tuesday. But he says this in-person interaction is hard to find nowadays, with most journalists communicating via email or over the phone.

“We are not showing up in our business,” he said.

And this is fundamentally what journalists can do to mend the broken trust. By showing up, we can hope to rebuild the trust we’ve lost.