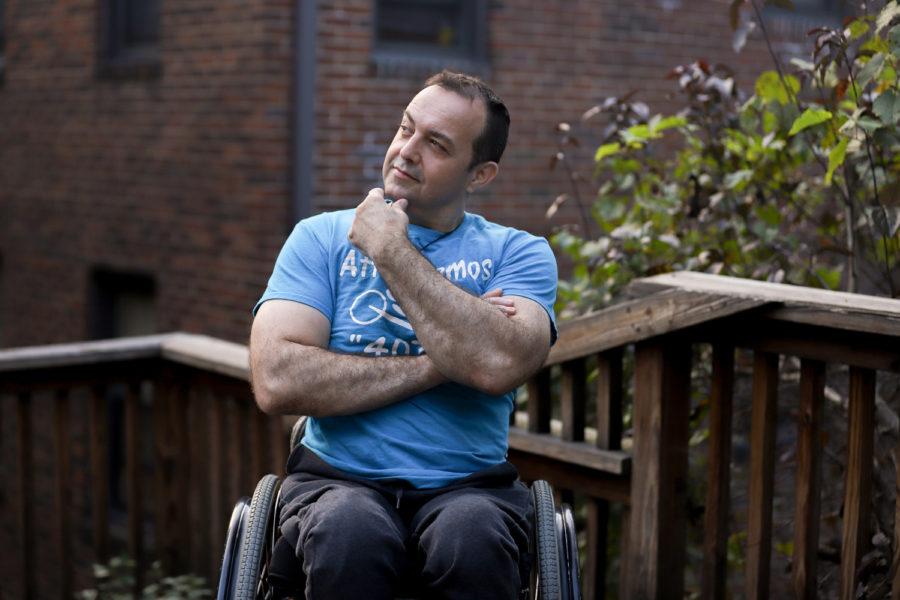 Attila Domos started handcycling in 2009 in preparation for the 2010 Pittsburgh marathon.

The City of Pittsburgh has seen its fair share of Guinness World Records, from the man with the highest-insured hair to the world’s largest pierogi. For Attila Domos, a Pittsburgh native, a place in the record books means more than that — he doesn’t just want the record for the longest distance handcycled in 24 hours. He wants to inspire others in a way that will do his life story justice.

Domos, 50, is a longtime Pittsburgh resident, musician and paraplegic athlete who attempted to break the record for the longest distance handcycled in 24 hours — a record he’d gone for twice already — at the Uber test track in Hazelwood on Oct. 6 and 7.

“I want people to look at the big picture [of the world record],” Domos said in an interview before the attempt. “Whatever you are dealing with, it could be a thousand times worse than it is right now. I want to provide this perspective for people.”

Originally a native of Romania, Domos moved to Hazelwood in 1980 as a result of the troubled political climate.

“We are Hungarian, the largest ethnic group in Romania,” Domos said. “Nicolae Ceausescu, the president at the time, was wiping out Hungarian privileges, taking away schools, so we moved to Austria for a couple of years before leaving for the United States.”

He attended Taylor Allderdice High School in Squirrel Hill, where he played for the football team and started his own band. He became paralyzed from the waist down in his late 20s due to a falling accident just after his band, Big Bad Wolf, had signed a major record deal. The band broke up shortly after his accident.

“We were sort of a typical late ’80s early ’90s rock band, similar to Van Halen in style, but we had a huge range of musical influences. I was the songwriter, but I had the other guys write their parts to the songs,” Domos said.

While at the Austrian refugee camp, Domos passed time by playing soccer, and it’s this experience that led him to consider himself an athlete. Even when he became paralyzed, he continued to stay in shape., so to test his endurance and abilities, Domos took on handcycling in 2009 in preparation for the 2010 Pittsburgh marathon.

Handcycles are similar in concept to bicycles, consisting of wheels and a method of gear shifting for improved efficiency on varying terrain, but the similarities stop there. The one Domos uses has three wheels and is pedaled by hand while lying down. 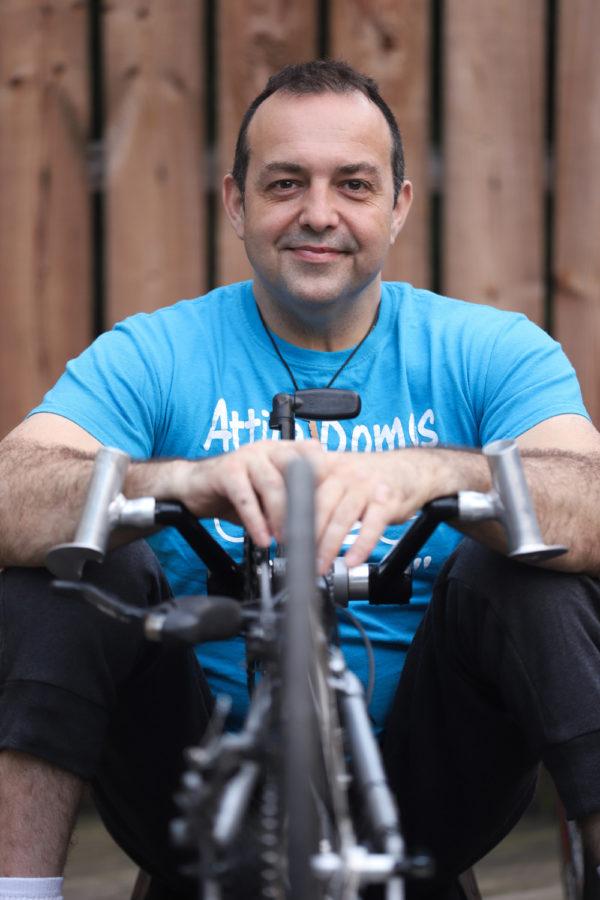 Kaycee Orwig | Staff PhotographerDomos’s handcycle has three wheels and is pedaled from a supine position.

After Domos’ 2010 Pittsburgh Marathon attempt, he was left with a condition known as skin breakdown, an ailment in which there is a lack of blood flow to an area of skin, that is especially severe for paraplegics. He was confined to his bed for the next three-and-a-half years.

While on bedrest, Domos focused on his other interests besides athletics.

“Luckily, technology is available to kill time,” Domos said. “I got really good at frisbee golf on Wii Sports and I almost broke the world record on the console. I also rescored the movie ‘Nosferatu.’”

The number 407.7 holds a special significance for Domos — it’s how far he managed to go when he unofficially broke the 403.8-mile handcycling record in 2016 at the Bud Harris half-mile cycling oval.

“When we left in Romania in 1978 we moved to a refugee camp about 40 miles from Vienna. It was rough in the refugee camp, a lot of fights and things,” Domos said. “My parents wanted to get me out of that environment so they auditioned me for the Vienna Boys Choir, and I got in. It took up my week, and on weekends I would come back and just try to keep it secret I was in the boys choir due to the rough environment.”

But today, his current genres include rock and pop — two genres that stray from his background singing in a boy’s choir.

“Classical music was my biggest influence,” Domos said of his early musical career. “My parents were in a symphony in Romania.”

Domos also wrote his self-published autobiography, “Because You Shouldn’t be Afraid to Chase Your Dreams,” while on bedrest, and it was during this time that he decided to go for the handcycling record — a feat he would attempt more than once.

Unlike other endurance sports, handcycling is an anaerobic activity, requiring short, explosive bursts of energy. This makes a record carried out over 24 hours even more impressive, according to Wendy Bell, a journalist and friend who witnessed his first official attempt at the record in Borrego Springs, California, last year.

“He had a brutal, painful [attempt] coming up short in California. [He hopes to] bring home the world record in Pittsburgh,” Bell said in a live stream on Facebook. “I don’t know if any of us could ever do anything even remotely like that.”

For someone strapped to their back mere inches from the ground while traveling at high speeds, elements like water and rugged terrain are a huge issue. This came to light during the Borrego Springs attempt, which left him concussed just shy of the 200-mile mark as a result of the constant jostling. As a result of this, he was forced to end the try prematurely.

Armed with experience and new strategies, he took to the starting line at the Uber test track at 5 p.m. on Saturday, Oct. 6, surrounded by a support crew of family and close friends. 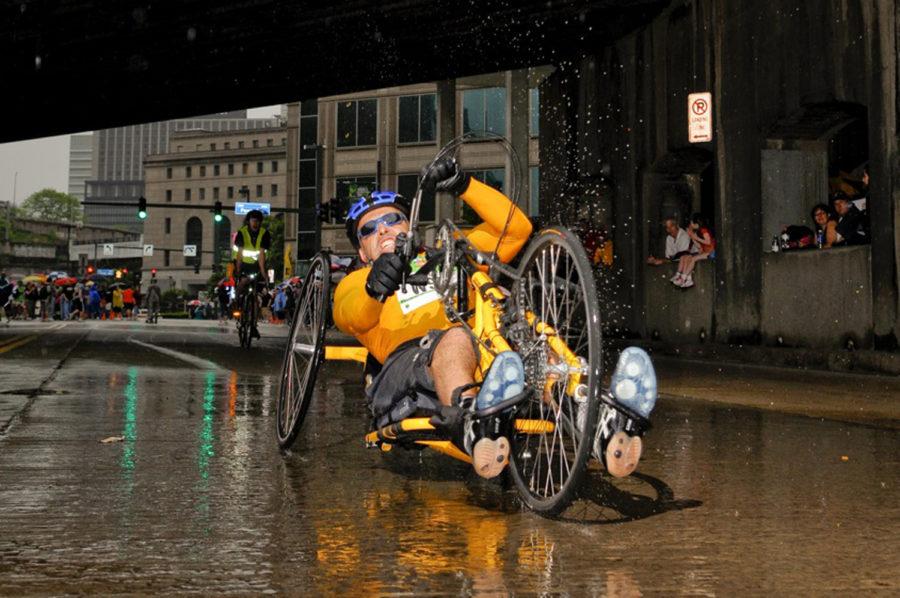 Photo courtesy of Rob LarsonAttila Domos attempted to break the Guinness World Record for longest distance handcycled in 24 hours on Oct. 6 and 7.

“I have lived my whole life rolling with the punches, reacting to what I was given,” Domos said. “This is how it has always gone for me. In 1993, I signed a record deal and was paralyzed the next day. Now the Uber track is half a mile from where I grew up. The story has come full circle.”

The strategy was to finish 100 miles in the first five hours — a pace that would give him almost four hours of cushion. Domos followed through and covered 43 laps, each a little under a mile, within the first two hours. This pace more than doubled that of the current world record, which Thomas Lange of Germany has held since 2009.

Although he managed to stay close to the intended pace at the start of the event, his huge lead quickly diminished through the night as weather conditions deteriorated and affected his performance. It rained earlier in the day, leaving puddles all over the course which made navigation difficult. The night was humid and hot, far from ideal circumstances. These conditions took their toll on Attila.

“He really is extremely beat up,” the younger Domos continued. “Those puddles killed him, absolutely killed him. That slows you down, makes you soaking wet and miserable and it kills your time.”

Unfortunately, the hot, sticky weather continued and his team soon had to spread out around the course, cheering and doing anything they could to keep his morale up as he reached the critical stretch of his journey.

In the end it wasn’t enough. With 90 minutes left to go on Sunday, Oct. 7, Domos still had over 40 laps to complete, a distance that had taken him two hours when he was well rested. At this point, he decided to end the attempt.

But for Domos, an attempt like this is just the beginning. Although he had maintained initially that this would be his final attempt at the record, new details came to light after the try. Danny Chew, a Pittsburgh cyclist and friend of Domos who was paralyzed in a 2016 accident, told Domos that Lange didn’t achieve the record on his own.

“During their attempt, multiple people were racing, drafting off of each other and using that to their advantage to further the record,” Domos revealed.

Drafting is a strategy used while racing to eliminate drag, thereby increasing speed — over the course of a 24-hour race, such an advantage could have a massive impact on the total distance.

According to Guinness Book of World Records PR coordinator Rachel Gluck, Lange’s record still counted as a solo attempt despite being in a race setting. Regardless, this information galvanized Domos, who has since committed to another attempt at the record.

“Next year I’m going to start at noon and cut out places of the track where the rain collects,” Domos mused, already internalizing the details of his next attempt.

Once he finally breaks the record, Domos wants to complete the more than 4,200-mile Trans Am Bike Race across the United States, swim across the Atlantic Ocean and eventually cross the entire world of his own volition via swimming and handcycling. He plans to create a reality TV-style program centered around his exploits with the goal of raising money for charities concerning spinal injuries.

“Events like swimming an ocean come along every once in awhile — there’s a media circus as they begin and fanfare when they finish, but no one ever gets to come along with them on the journey. That’s what I want to provide,” Domos said.

When it comes to his own personal goals, Domos happily pleads an optimistic testament to his willpower and dedication.

“I’ve lived a life of sex, drugs and rock and roll,” Domos said. “If I get eaten by sharks, so be it. Everyone has to die somehow.”

This article was made possible in part by a grant from The Year of Pitt Global.