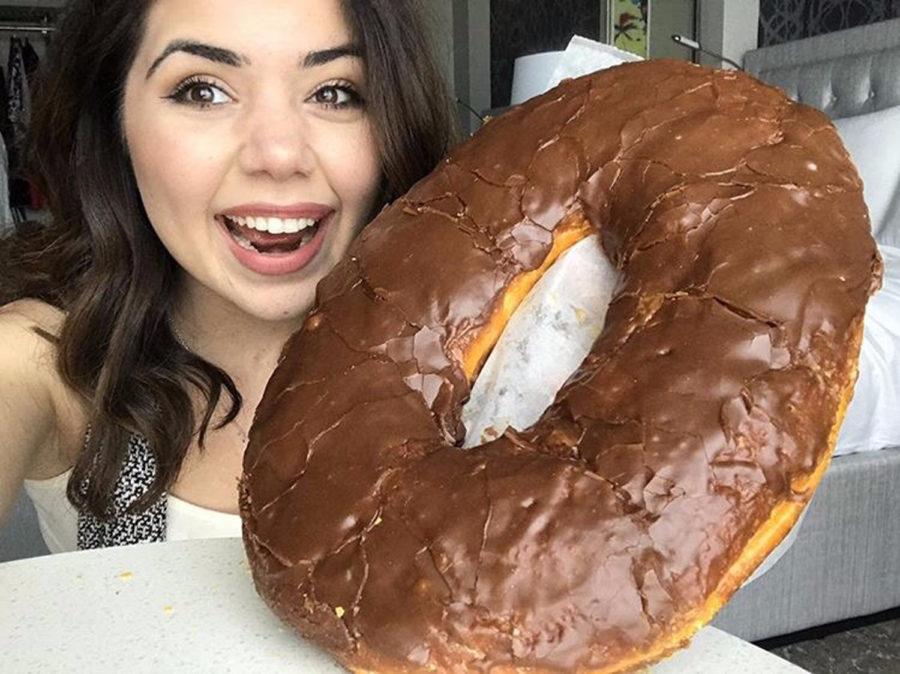 Elaine Khodzhayan poses for a selfie with a giant chocolate-frosted doughnut.

At some point every day, scrolling through Instagram or Facebook, you likely see videos of anonymous hands chopping, mixing, cracking eggs or drizzling chocolate. And if you’ve ever wondered whom those hands belong to, you might just have to look around campus.

For most social foodies, running a food Instagram page is about sharing a lifelong passion for cooking and baking. From vegan food to homemade baked goods to a variety of restaurant dishes from around the world, these Pitt foodies all have a different voice to bring to this growing, popular market.

Elaine Khodzhayan, a 2018 Pitt grad and Instagram foodie, has turned her hobby and passion for food into a brand, amassing more than 27,000 followers since she started the account @AndAChocolateDrizzle in 2015 and publishing a cookbook in 2017.

“I’ve loved cooking and baking since as long as I can remember. I would read cookbooks for fun — still do — in order to learn more, and my time spent in the kitchen was a steady array of experiments and recipe tests,” Khodzhayan said.

Khodzhayan likes to focus on the photography that goes into each picture, maintaining a clean aesthetic.

Hey y’all! Okay, maybe we aren’t there yet… Hey, friends! Long time no inducing your sugar rushes…there’s been a lot going on in my life the past couple of months, and the biggest bit has been my recent move to Austin, Texas! 🤠 From being in college to graduating to starting a job to MOVING, it’s surely been a doozy, but I’m finally feeling like I’m getting back into a groove with myself again – displayed by my baking frenzy today (gotta start sugaring up my office mates, after all) 🍫🍩 Anyway, I hope you all have been doing well, and I’m looking forward to sweetening up your days again 🍪 In the meantime, if you have any recommendations of things to do, eat, and see in Austin, PLEASE let me know!! I’d love to hear your ideas 😊 (P.S if you’re an Austin foodie, blogger, or baker and want a new friend, please message me! 🤗) Have a wonderful night, my friends 💓

A post shared by Elaine Khodzhayan (@andachocolatedrizzle) on Oct 1, 2018 at 7:20pm PDT

“But for me, it’s more about making sure that each photo makes someone want to reach through their phone and grab a piece of whatever it may be,” she said. “We eat with our eyes first, after all.”

Khodzhayan loves the backstory behind food — learning about the science behind the ingredients and how flavors intermingle with one another. Knowing who created a recipe and why they did it or just the simple ability of tying a memory to a taste or a dish is something she values.

“I grew up in the pizzeria business and it has been ingrained in me to care about the people behind the menu. It’s such a cool, thoughtful way to look at food if you think more about the people who made it possible for it to be in front of you,” Khodzhayan said.

“And A Chocolate Drizzle: The Cookbook” was a dream made into a reality for Khodzhayan. Ever since she was little, Khodzhayan would keep all her recipes in a purple binder that she liked to call “Elaine’s Cookbook.”

“It was always a dream to actually have a collection of my own recipes put together in a way that other people could mimic my recipes and add some extra sweetness into their days,” said Khodzhayan.

Other Pitt grads have also been able to take their love of food into the viral social media scene, like Jessie Iacullo, a 2017 graduate.

Iacullo came up with the Instagram alias @HungryGrl_BigCity when she was a sophomore — and thus her foodie account, which today has 32,000 followers, was born. Iacullo grew up in an Italian family in northern New Jersey spending time bonding with her grandma and mom in the kitchen.

Iacullo views food as a unifier. Through exploring the food scene in both America and Europe, she uses her platform to display a variety of beautiful dishes and tell a story.

“I turned it more into the art of storytelling and not just the visual, which I think helps me also stand out because a lot of people comment that they actually read my captions, which I feel like that’s so rare,” Iacullo said. “I’ve developed such a voice and it’s very personal — it kind of ties into my life.”

Iacullo attributes most of her account’s popularity to timing and location. Her ability to travel so frequently and to a multitude of locations over the past three years has allowed her to gain audiences from all over the world — but specifically in Pittsburgh and New York — where she works with restaurants by giving them exposure on her page.

She is able to make some money off of these affiliate marketing endeavors, though Iacullo says it isn’t a livable wage, and instead makes her living in social media marketing and freelance writing. In the past, she worked at Forbes as a social media editor — a job she said HungryGrl helped her secure.

“I think timing is everything. When I started, it was before the time when everyone and their sister had a food account, so there was room for me to grow my page. It has grown into a little bit more of a sophisticated thing, but I think it’s also really been about my location,” she said.

Despite her popularity and continuous stream of natural, brightly-lit photographs of mouth-watering dishes, running @HungryGrl_BigCity has become second nature to Iacullo, not feeling any outside pressure from her large following.

“I don’t think there’s any outside pressure — if anything, there are those moments of internal pressure,” Iacullo said, “… because at the end of the day it’s my authentic self — who I am in person is who I am on HungryGrl.”

For other foodies, being present on social media isn’t about sharing a lifelong love, but more about developing a healthy lifestyle and gaining self-confidence.

Natalie Colantuono, a junior nutrition and dietetics major, started her Instagram page @_cilantropist in the summer of 2017 during her journey of rebuilding a positive relationship with food. Though her page is smaller — with 755 followers — it focuses on healthy and nutritious food, evident in her colorful feed filled mostly with vibrant home-cooked dishes.

Is there anything more comforting than a warm noodle bowl on a chilly fall day?! 🍂 Hanging out with my momma today, doing some shopping, went to a farmers market, and eating some yummy food – this is my type of day!!! 🌞 Hoping y’all have a great Saturday too 🌱

“I’ve always loved food and how it related to health and fitness. I was a competitive cheerleader for a long time — it was always very important to me to have a good diet, exercise, so I could perform to the best of my ability,” Colantuono said. “But I found through that that a lot of people have really bad relationships with food, myself included at one time.”

When she was 15, Colantuono struggled with an eating disorder. Since starting her Instagram account, she’s continued to improve her relationship with food, becoming a vocal advocate for body positivity.

“I like to focus on how we look at food and how we equate it to our self-esteem and worth,” said Colantuono. “I’m really big on body image and counteracting the mass media that wants to throw out all these ‘fad diets’ that really tend to under-nourish people and they make them look at food as something that’s bad instead of something that’s nourishing and just enjoyable in general.”

Colantuono enjoys being a source of positivity through her account and is very open about her past struggle with food.

“I think vulnerability is a sign of strength,” said Colantuono. “I just like being a light for people because there is a lot of negativity out there.”