From branch to bottle: all of DeLallo’s olives 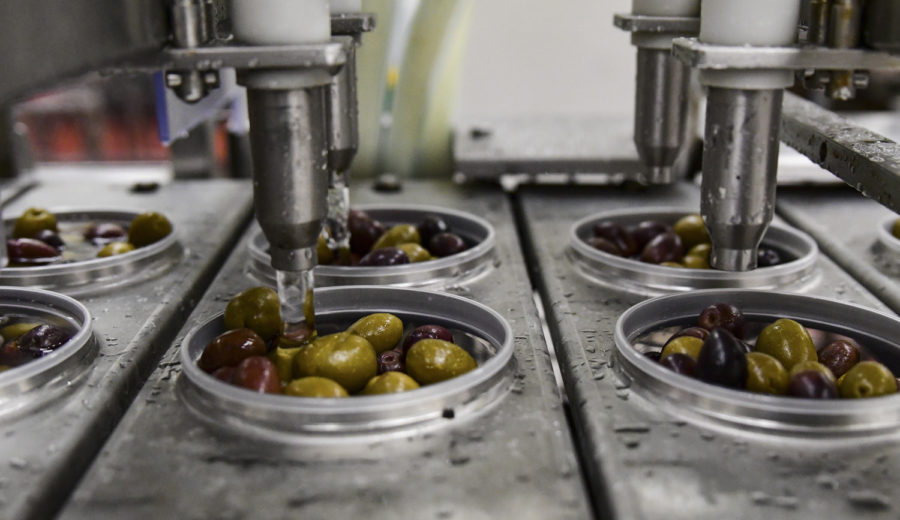 Olives are cleansed with water as they move through the assembly line at DeLallo’s olive processing facility.

By Elizabeth Martinson, For The Pitt News

Jeff Latimer likes to give his olives the Jacuzzi treatment.

The director of operations at DeLallo’s olive production facility doesn’t exactly run his plant like a spa, but the olives begin processing with a plunge into a basin of swirling salty brine, with air jets shooting a sea of tiny green dots in all directions.

“This hopper is where everything starts,” Latimer said. “We use filtered air — it’s like a Jacuzzi tub.”

The George DeLallo Co. was founded in 1950 and is currently the largest importer of olives in the nation. On Friday, a group of roughly 15 students involved in Pitt’s Real Food Challenge — a national student initiative aiming to increase the amount of sustainable, fair, humane and locally sourced food in campus dining halls — toured the facility.

In addition to olives, DeLallo’s is known throughout the greater Pittsburgh region for its Italian products, many of which are imported directly from Italy. DeLallo’s goods are available at the DeLallo Italian Marketplace in Jeannette and at various supermarkets across the country. In Pittsburgh, its products can be found at Giant Eagle and Pitt’s pop-up grocery store — and coming soon at the Forbes Street Market.

DeLallo’s receives its olive varieties from around the world. A majority come from the Mediterranean region — including Greece, Italy and Portugal. But according to Latimer, the company also sources olives from Argentina, Peru and its own facility in California.

“We have the only olive processing facility in the country in California,” Latimer said during a tour of DeLallo’s processing plant.

When George DeLallo, founder of DeLallo’s, began importing and repackaging olives about 25 years ago, the plant consisted of one assembly line that was entirely run by hand. Over the years, DeLallo’s has added automation and additional production lines. The original line is still run by hand for speciality products and small orders, like marinated beets.

The processing plant in Mount Pleasant is the last stop of a long journey for the olives — which began during the previous year’s harvest — before they hit store shelves.

“It takes about 12 to 14 months to fully cure an olive from field to production and packaging,” Latimer said, describing how olives are left to soak in a high-concentration saltwater solution called brine.

Some larger olives soak for up to 18 months before they arrive at the processing plant. The olives are shipped in a brine solution in large barrels, which can have a shelf life of more than a year.

From the barrels, the olives and the brine are tipped into hoppers — some of which can hold between six to eight barrels at any given time, others up to 20 to 24 barrels — before they advance along the assembly line.

To transfer the olives from the hoppers to packaging, they are shuffled along shake tables to remove any remaining debris such as pit flesh, twigs or leaves.

Merchants and farmers typically pit the olives before they arrive at the Pennsylvania plant. However, they can still retain some bits of pit and other debris from the picking and pitting processes.

“We’re getting rid of any excess pit flesh, any field leaves, any sticks or anything that might come along with the product.” Latimer said. “These shakers will take that off so when the product is hitting the container, you’re getting olives and marinade, you’re not getting anything else except product.”

From the shakers, olives are transferred via conveyor belt to large scales that dispense the appropriate amount of olives into containers waiting below. Olives destined for bars are dropped into plastic bags, while those for retail are placed in plastic tubs.

Once the olives have been dispensed into their new packaging, they are covered in brine or oil, depending on the recipe. In either case, the olives are completely soaked. After being covered in marinade, the packaging is vacuum-sealed to extend the shelf life.

DeLallo’s range is not limited to varieties of olives — it also offers mixes containing multiple elements like cheese and other vegetables and stuffed olives, which are filled with ingredients such as cheese or pimento peppers. Just as pits are not removed at the processing plant here in Pennsylvania, olives arrive at the plant pre-stuffed.

“We do have a sister company that stuffs a lot of olives,” Latimer said. “It’s about 100 people standing around a table pushing things into holes in olives.”

Not all olives are stuffed by hand — some are machine- or ribbon-pitted.

Sometimes, every element of an olive marinade or mix can be dumped in the hopper and added to the assembly line from there. Other times, ingredients need to get added later in the process.

“We can do multiple ingredients,” Latimer said to the group. “Some things, we open up and add to a recipe by hand, like cheese gets added on on the shaker up above. We open cans and dump them. There’s a variety of ways we can incorporate recipes.”

Some of DeLallo’s individual resale products are even shipped upside down.

“They tend to form a more solid pack upside down,” DeLallo said. “If it’s an item with oil and spice, they’re gonna flip it right-side up and help us marinate our product when they put it on the shelf.”

During olive harvest season, raw olives are available for purchase at the DeLallo Italian Marketplace for olive-lovers wanting to cure their own. For DeLallo’s director of marketing Guiliana Pozzuto, curing olives was a family tradition. Her mother frequently bought raw olives to be cured at home.

“We used to cure them all the time when we were little and we would keep them for the whole year,” Pozzuto said. “We’d go downstairs and just grab a jar off the shelf.”