11 dead, 6 injured in massacre at Tree of Life Congregation in Squirrel Hill 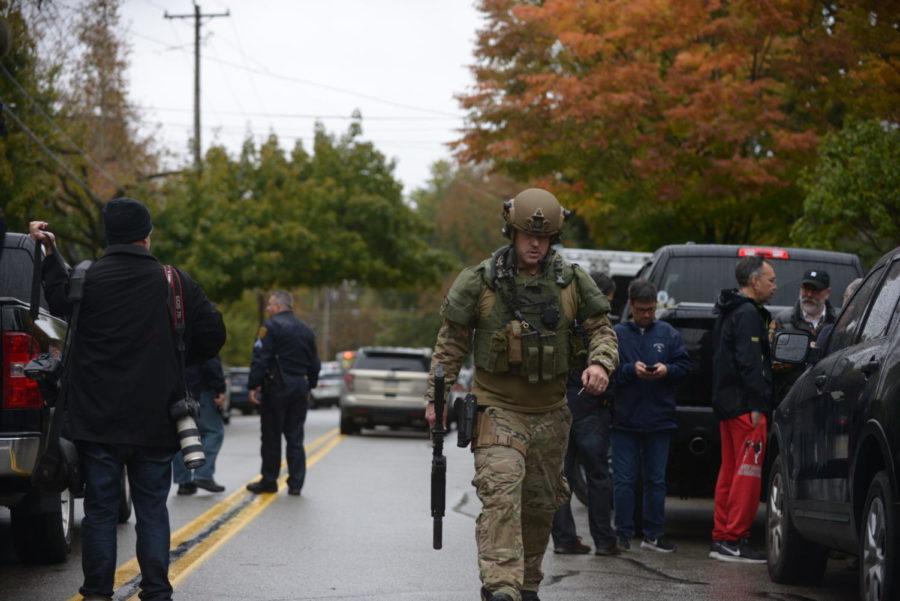 Eleven people are dead and six injured after an active shooter, yelling anti-Semitic slurs, attacked the Tree of Life Synagogue between Shady and Wilkins avenues in Squirrel Hill Saturday morning. It was the deadliest attack on the Jewish community in American history, with Pittsburgh Mayor Bill Peduto calling it “the darkest day in Pittsburgh’s history.”

Robert G. Bowers, 46, of Pittsburgh, has been charged with 29 counts of federal crimes, including 11 counts of homicide at Tree of Life. He also faces dozens of state charges.

At a press conference Saturday afternoon, Pittsburgh Public Safety Director Wendell Hissrich confirmed the number of fatalities and injuries and said four police officers were among the injured. None of those fatally shot or injured were children.

Authorities published a full list of victims at a press conference Sunday morning:

Cecil and David Rosenthal are brothers

Bernice and Sylvan are husband and wife

The victims, who ranged in age from 54 to 97, were among the worshipers at Tree of Life. A bris, a ceremonial circumcision event for newborn boys, was taking place when the shooting began according to WPXI.

The Pittsburgh Public Safety Department first tweeted reports of an active shooter at Wilkins and Shady in Squirrel Hill at 10:34 a.m.

The University of Pittsburgh sent a text alert with the following:

“Shots fired at the Tree of Life Synagogue on Wilkins Ave. Police operations are ongoing. Avoid the Squirrel Hill/Shadyside area.”

Bowers surrendered to the police after exchanging gunfire in the synagogue and remains hospitalized after undergoing surgery for multiple gunshot wounds. He is expected to appear in court as early as Monday, according to CNN. His remarks during an exchange with a SWAT officer revealed that he “wanted all Jews to die,” and that they “were committing genocide against his people,” according to the Pittsburgh Police criminal complaint.

Bowers’ social media history displays a history of anti-Semitism, including activity on the social media platform Gab, an alternative to Twitter that is often home to conspiracy theories. Bowers’ Gab account has since been deleted.

“Robert Bowers represents the worst of humanity,” Scott Brady, U.S. Attorney for the Western District of Pennsylvania, said at Saturday’s conference. “Justice in this case will be swift and it will be severe.”

FBI members are investigating the shooting as a federal hate crime. At Saturday’s press conference, FBI Special Agent in Charge Robert Jones said Bowers entered the synagogue with “an assault rifle and three handguns,” and according to the criminal complaint filed Sunday, the Department of Alcohol, Tobacco and Firearms recovered three Glock handguns and one Cole AR-156 model rifle.

Pittsburgh Chief of Police Scott Schubert said the injured officers — two first responders as well as two SWAT team members who engaged the shooter inside the building — are all in stable condition.

Don Yealy, the vice president of Emergency and Urgent Care at UPMC Physician Services, said the six injured have been sent to three different hospitals. A 61-year-old female, a 70-year-old male, a 55-year old officer and another officer were sent to UPMC Presbyterian in Oakland. A 27-year-old officer was sent to UPMC Mercy and another unidentified injured person was sent to Allegheny General Hospital. Two of those injured, the 70-year-old male and the 55-year old officer, are in critical condition as of Sunday morning. One of the officers has been released.

Gov. Tom Wolf, who was also present at Saturday’s press conference, praised the bravery of the law enforcement officers who responded to the scene and expressed sympathy for the victims and their families.

Gov. Wolf also issued a statement in response to the situation earlier in the day.

“The shooting in Pittsburgh this morning is an absolute tragedy. I have spoken with local leaders and my administration and the Pennsylvania State Police will provide any resources to assist local law enforcement and first responders,” Wolf said in the statement.

President Donald Trump also put out a statement regarding the shooting on Twitter.

Tree of Life is the conservative synagogue in Squirrel Hill that contains three congregations — Tree of Life, New Light and Dor Hadash. Morning services begin at 9:45 a.m. and end at noon.

The Tree of Life Synagogue is located at the corner of Wilkins and Shady Avenue. (Brian Gentry | Online Visual Editor)

Jeff Finklestein, president and CEO of the Jewish Federation of Greater Pittsburgh, told KDKA reporters during a live broadcast, “A typical Saturday morning would have maybe 50-to-60 people, a guess.”

Rabbi Chuck Diamond, a former spiritual leader at the Tree of Life, told reporters at the scene of the shooting that it’s a difficult time for everyone affected.

“I called people that I knew, tried to see if they were OK. One is a doctor and he said he saw somebody’s name on the list who was taken to the emergency room who was, again, one of those people who was always there,” Diamond said.

Michael Eisenberg, the immediate past president of the synagogue, told KDKA there are three simultaneous congregation services on Saturdays at 9:45 a.m.

“On a day like today, the door is open. It’s a religious service — you can walk in and out,” Eisenberg said. “Only on the High Holidays is there a police presence.”

During his time as president, Eisenberg worked with the Department of Homeland Security and other synagogues to bring in the police presence during major holidays.

“Moving forward, this is a real occurrence and we need to learn from this. In light of this happening, it will be a catalyst for the future in most religious institutions,” Eisenberg said.