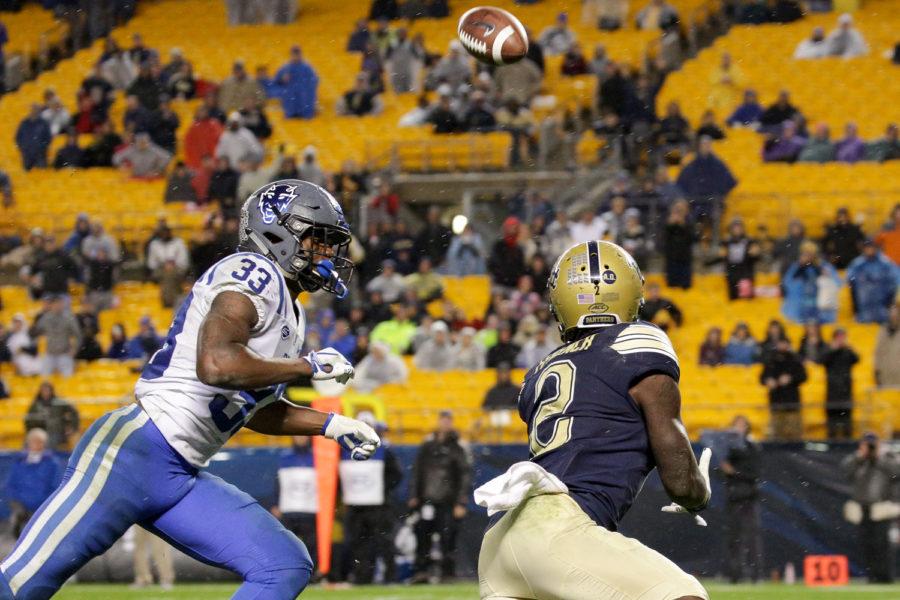 With the game tied at 45 and no timeouts remaining, the Panthers needed sophomore quarterback Kenny Pickett to lead them downfield with just over a minute left to play.

Pickett had struggled up to that point, completing just four of 13 passes for 78 yards and a touchdown. But he came up clutch when Pitt needed it most, completing all four of his passes — including the 25-yard game-winner to junior receiver Maurice Ffrench — for 72 yards to lift the Panthers over Duke, 52-45, with five seconds left.

“The off week we worked really hard on the two-minute drill,” Pickett said. “We worked a lot of different situations — having timeouts, having no timeouts, so I think it really paid off for us this week.”

Pickett was the late-game hero, but it was Pitt’s ground game that carried them to victory. The Panthers rushed for 484 yards as a team — the second-most in program history — led by an 18-carry, 149-yard, one-touchdown performance from senior running back Qadree Ollison.

“That’s Pittsburgh football. Being blue-collar, just being tough,” Ollison said. “We pride ourselves on that.”

In a surprise performance, first-year defensive back V’Lique Carter switched over to the offensive side of the ball and rushed for 137 yards and two touchdowns on only seven carries. Carter, who hadn’t touched the field all season, impressed the coaches with his play as a scout team running back during practices.

“We put him on as a scout team tailback first couple weeks. [We thought] holy cow, this guy is explosive,” head coach Pat Narduzzi said. “We’ve been thinking about it for a while here. Kind of saved it a little bit for the ACC play…obviously he’ll get a few more carries next week.”

The win was important for the team but also for the city, which went through a national tragedy earlier in the day when a gunman killed 11 and injured six at the Tree of Life Synagogue in nearby Squirrel Hill. The incident was on the mind of Pitt’s players and coaches throughout the match and afterward, with each member of the team expressing their prayers and wishes before addressing any questions regarding the game.

“Well, if you guys feel anything like I do, about 11:00 this morning when I got my email, what happened over in Squirrel Hill, there’s a lot more important things than a football game, I can tell you that,” Narduzzi said. “My prayers, this football team’s prayers, our family’s prayers go out to the victims, to the SWAT Team, the police officers of Pittsburgh, to all the families that are affected by that.”

On their first drive, the Panthers bore no resemblance to the unit that entered the game with the nation’s 99th-ranked scoring offense. They instead looked like a well-oiled machine, driving from their own 35-yard line to the opposing 30 in seven plays. Facing a crucial third-and-seven, Pickett kept the ball on a fake handoff and outran the Duke defense from there. The 30-yard touchdown run put Pitt up 7-0 early.

That one-touchdown lead didn’t last long, with the Panthers allowing an 11-play, 62-yard touchdown drive on the Blue Devils’ next offensive possession. Pitt had no answer for junior quarterback Daniel Jones, who accounted for 56 yards — both rushing and passing — on the drive. The last six yards came from backup junior quarterback Quentin Harris, who punched in the game-tying score on a direct-snap run up the gut.

Pitt’s offense struggled for the remainder of the first quarter, going three-and-out on each of their next two drives.

The Panthers dodged a bullet when a flea-flicker pass from Jones went right through senior tight end Daniel Helm’s hands in the back of the end zone, keeping the game tied at seven. On Duke’s next drive, however, Pitt had no such luck — the Blue Devils drove downfield uninterrupted and senior receiver TJ Rahming capped off the 72-yard drive with a three-yard touchdown reception. That dealt the Panthers their first deficit of the game with 11:41 left in the first half.

To answer back, head coach Pat Narduzzi pulled a trick out of his sleeve and decided to use Carter as a speedy offensive weapon. Carter, who previously hadn’t played a snap all season, made his presence known with a 62-yard jet-sweep rush down the right sideline to Duke’s seven yard line. Pitt’s offense ultimately stalled out, but sophomore kicker Alex Kessman managed to convert a 27-yard field goal to trim the Panther deficit to 14-10.

On their first offensive play of the ensuing possession, the Blue Devils countered with a 60-yard rush of their own from sophomore running back Deon Jackson. Unlike Pitt, Duke was able to use the quality field position to put seven points on the board, with Jones finding Rahming again four plays later for a four-yard touchdown pass, giving the Blue Devils a 21-10 lead.

Continuing with the theme of big plays and quick drives, it only took the Panthers three plays to score once they got the ball back. From midfield, Pickett uncorked a deep ball into the end zone for Ffrench, who used one final burst of speed to get his outstretched hands underneath it for the touchdown.

Now leading 21-17, the Blue Devils had one last opportunity to extend their lead before half, marching down to the Pitt 11 yard line with under a minute remaining. But Pitt senior defensive back Dennis Briggs came up clutch for the Panthers, sacking and forcing a fumble on Jones to stifle Duke’s scoring chance.

Pitt ran out the remainder of the clock, keeping the score at 21-17 Duke after one half.

Four yards, two yards, 74 yards — that’s how Duke’s offense started the second half, with the latter gain coming off a short pass from Jones to Jackson, who flashed his speed again by torching Pitt’s defense en route to the end zone. Just one minute into the third quarter, the Blue Devils extended their lead to 28-17.

In a game that began to reveal a serious lack of defense, the Panthers pulled back within three points after a four-yard Ollison touchdown and two-point conversion catch from senior receiver Rafael Araujo-Lopes, only for Duke to crack the lead back open to 10 on a one-yard rush by Harris, his second touchdown of the day.

With 7:45 remaining in the third quarter and the score at 35-25, neither team had punted the ball since Pitt’s last three-and-out in the first quarter.

The offensive trend continued on each of the team’s next possessions, with Pitt’s new not-so-secret weapon Carter rattling off a 31-yard touchdown run — giving him 115 yards on only four carries — only for the defense to concede a 68-yard catch-and-run from Duke senior receiver Johnathan Lloyd, making the score 42-32 in favor of Duke.

Pitt’s next drive came to a halt at the Duke 36 yard line, presenting the team with the choice to either punt it or go for the deep field goal. Field goals at Heinz Field in rainy conditions from 50 yards or more are typically a kicker’s worst nightmare, but Kessman made two in one game against Syracuse earlier this year, including a Heinz-record 55-yarder.

Narduzzi elected to gamble on Kessman’s big boot, sending out the field goal unit for the 54-yard attempt. Kessman didn’t disappoint, launching the attempt just over the bottom upright to bring Pitt within seven points, 42-35. The kick also gave him the distinction of having the most field goals of 50 or more yards in Pitt football history, with five.

Next, Pitt’s defense did something for the first time all game — force Duke to punt. The Blue Devils went three-and-out, handing the Panthers quality field position to tie the game at their own 41 yard line.

Ollison carried the offense, rushing for 13 yards on second-and-10 and 25 yards on first-and-20 to move Pitt into the red zone. Then from the 16 yard line, Carter took a handoff, found a crease and exploded down the right sideline, leaping into the end zone while surrounded by defenders for the tying touchdown. With that, the former backup defensive back found himself with six carries for 133 yards and two touchdowns on the day.

Duke took the lead back on its next possession, getting down to Pitt’s six yard line but no further. Senior kicker Collin Wareham converted the 25-yard field goal attempt, making the score 45-42 Duke with 8:07 remaining.

The Panthers had a great opportunity to take the lead, driving down to Duke’s eight yard line to set up a first-and-goal. However, a holding and personal foul penalty marched them back 10 and 15 yards — bad for the offense, but perfect for Kessman’s long-distance preferences. On fourth down, Kessman came up clutch by nailing the 48-yard field goal to tie the game at 45.

The defense came up with another timely stop and after a Duke punt, Pitt got the ball back with 1:14 left in the game on their own 18 yard line. The Panthers had no timeouts remaining, meaning it was all up to Pickett to move the team downfield.

With the game on the line, Pickett shone brighter than he had all season, completing three straight passes then running for 11 yards to move the Panthers to the 25 yard line — easy field goal range for Kessman.

But with 11 seconds remaining, Narduzzi elected to take one shot at the end zone before settling for a field goal. Pickett dropped back and, with pressure in his face, launched a ball into the end zone. For the second time that evening, Ffrench streaked past his defender and positioned himself perfectly underneath Pickett’s pass, sliding to secure the game-winning touchdown.

“We practice it all the time, and that ball always came my way, so I was just praying that everything fell my way,” Ffrench said. “And I think the man upstairs made that happen.”

Kessman’s extra point gave the Panthers a 52-45 lead with five seconds left on the clock — not enough time for the Blue Devils to run an offensive play, but enough time to try some trickery on the kickoff return. Their attempt went haywire, and Lloyd’s pitch attempt went out the back of the end zone for a safety, giving Pitt a 54-45 victory.

The high-scoring offensive affair featured new records for both teams. For Duke, Jones set a new career high in passing yards with 396 and touchdowns with four. Jackson’s 162 rush yards, 89 receiving yards and 152 kick return yards gave him a total of 403 all-purpose yards — a new Duke record. The Blue Devils accumulated 619 total yards while the Panthers gained 634 yards, easily surpassing their previous season-high of 407 against Albany.

Next up, the Panthers will travel to Charlottesville to take on the University of Virginia (6-2 overall, 4-1 ACC) next Friday.