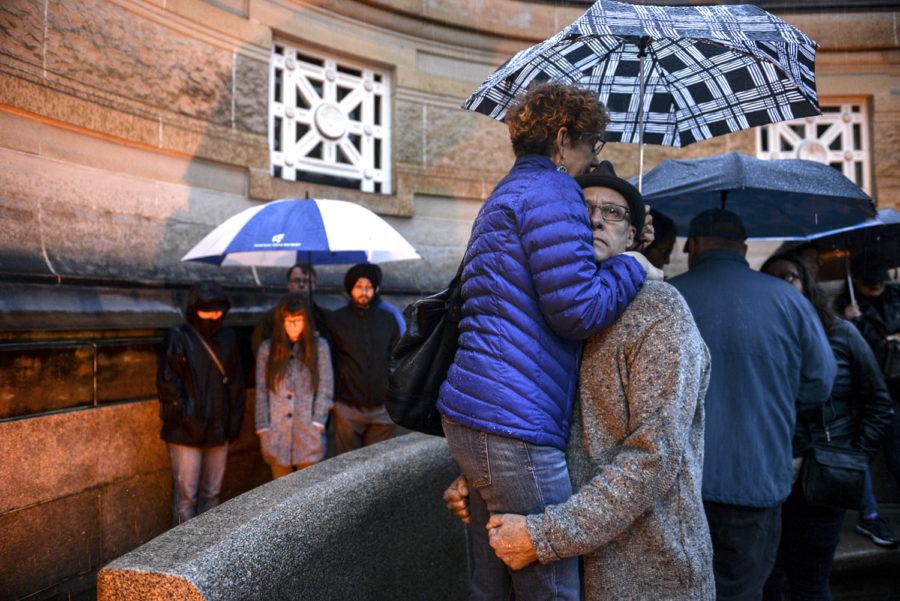 Two people embrace in the crowd that overflowed outside Soldiers and Sailors Memorial Hall Sunday evening during a vigil that mourned the victims of the Tree of Life Synagogue massacre.

Knitted yarmulkes and black coats dotted Soldiers and Sailors Hall as thousands gathered for a standing-room only vigil, held to honor the victims of Saturday’s massacre at Tree of Life Synagogue in Squirrel Hill. Hundreds more stood outside.

He described the horror he felt Saturday morning as he witnessed the attack and the despair that he’s felt since.

It’s a difficult question to find an answer for, but Myers had one. He addressed the political leaders in the room.

“Ladies and gentlemen, it has to start with you,” he said.

The crowd leapt to its feet in applause.

Political leaders in attendance included Gov. Tom Wolf,  Pennsylvania Sens. Pat Toomey and Bob Casey, along with Pennsylvania Reps. Mike Doyle, Keith Rothfus and Conor Lamb. Also present was Mayor Bill Peduto, who expressed the depth of the mourning felt by Pittsburgh after Saturday’s attack and condemned the anti-Semitism that drove it.

“We will drive anti-Semitism and the hate of any people back to the basement and away from the open dialogues around our city,” Peduto said, to another standing ovation.

Like the hundreds of people who attended the less formal vigil held in Squirrel Hill Saturday night, the people in Soldiers and Sailors Sunday evening came from all around Pittsburgh. The Port Authority operated extra bus services between Downtown, Oakland and Squirrel Hill to carry people to the vigil and did not collect fares on the 61 and 71 lines.

When Jeff Finkelstein, CEO of the Jewish Federation, asked any and all religious leaders in the audience to ascend to the stage, more than 30 came forward. They led the crowd in a recitation of Psalm 23 — several with tears in their eyes.

“Even though I walk through the valley of the shadow of death,” the crowd chanted, “I will fear no evil.”

Among the religious leaders leading the reading of the Psalm was Presbyterian minister Leigh Benish. Sunday morning, she said, she spoke to her own congregation about the importance of the ability to express religion freely. That evening, her belief in that freedom led her to the vigil.

“For me as a faith leader,” Benish said, “I felt it was important to support other people of faith, even if we don’t share that faith.”

The sentiment was echoed by numerous religious speakers, who voiced Christian and Muslim messages of support for the Jewish community.

Jamie Lynn Duane-Brady, 57, came to the event to show support for the community. As a child therapist who specializes in trauma, she’s seen how difficult these situations can be, especially for families with small children.

“You need to talk to them,” she said. “It’s a hard thing, to figure out exactly what to say to them. Not good to completely hide it from them, because they hear little bits and pieces.”

Marjorie and Vernon Phillips, older adults from Plum and Pittsburgh natives, were shaken by the news of the attack. Their granddaughter went to school in Squirrel Hill and had once attended a bat mitzvah at Tree of Life.

“I think this is horrific,” Marjorie said. “When I was a teacher I taught the kids not to hate. Well, I’m a hypocrite. I do hate. I hate what happened.”

Naftali Bennett, Israel’s minister of diaspora affairs, who traveled from Israel for the vigil, told the crowd that the strength of the community there gave him hope.

“Today, I did not see darkness,” Bennett said. “I saw light. I saw a community. I saw the Tree of Life, which will never be uprooted by hate.”

Finkelstein said the Jewish Federation would work in the coming days and weeks to bring the Jewish community — and all of Pittsburgh — together to mourn and to heal.

“I hope and pray for healing for everyone affected,” Finkelstein said. “At times like this, we need community. We are stronger than the tragedies that befall us because we are strong together.”