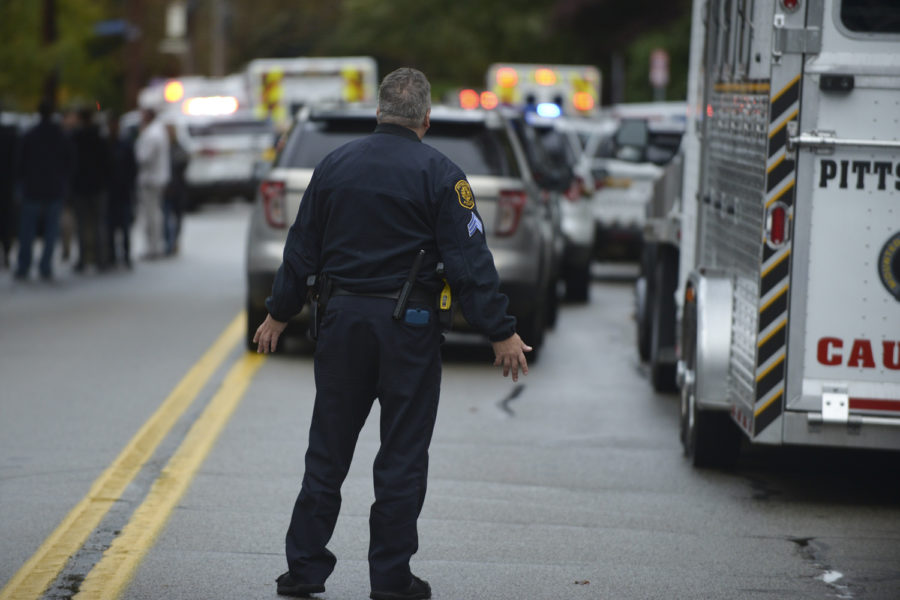 A Pittsburgh police officer stands amid law enforcement and emergency services vehicles outside the Tree of Life Synagogue Saturday morning.

After 11 people were killed and six were injured at a mass shooting at the Tree of Life Synagogue in Squirrel Hill Saturday morning, the U.S. Attorney’s office filed 29 federal charges against suspect Robert Bowers. Among them are charges for murder, hate crimes and firearms offences.

The massacre at the Tree of Life Synagogue joins a growing list of targeted violence at places of religious worship in recent years. Dylann Roof murdered nine African-American individuals in 2015 at the Emanuel African Methodist Episcopal Church in South Carolina. Roof was a white supremacist who posted racist manifestos online and purposefully targeted the black church. He was sentenced to death in January 2017.

Former Ku Klux Klan leader Frazier Miller murdered three people at the Jewish Community Center of Greater Kansas City and Village Shalom in 2014. He was convicted of one count of capital murder and three counts of attempted murder, among other assault and weapons charges. Miller was sentenced to death in 2015.

According to the criminal complaint filed Saturday evening in the U.S. District Court for the Western District of Pennsylvania, Bowers entered the Tree of Life synagogue in the Squirrel Hill neighborhood of Pittsburgh at approximately 9:50 a.m. Multiple people were in attendance at the synagogue, actively engaged in worship.

Bowers was armed with multiple weapons, including three Glock .357 handguns and one Colt AR-15 assault-style rifle, according to the federal criminal complaint. Once inside the synagogue, the complaint says Bowers shot and killed multiple people at the ongoing service and injured many others.

According to the Pittsburgh Police Criminal Complaint, law enforcement officers received the first call at 9:54 a.m. Two officers responded to the scene and observed a man, later identified as Bowers, who was armed with an assault-style rifle. They confronted Bowers near the front entrance of the synagogue as he was exiting the building, FBI Special Agent in Charge Bob Jones said at a press conference Saturday afternoon.

Bowers subsequently opened fire on the two officers, who returned fire, according to the state criminal complaint. During the exchange, one was shot in the hand and the other received several cuts to his face from bullet fragments and broken glass. Bowers then retreated into the building and made his way to the third floor.

The state criminal complaint says Pittsburgh SWAT then formed a small team and entered the building, where they found three women and eight men killed by Bowers. One man and one woman received gunshot wounds, and upon being found were carried out of the building by SWAT Medics and Officers and transported to UPMC Presbyterian Hospital for treatment.

The SWAT Operators entered the third floor of the building and encountered Bowers while searching for remaining victims, according to the state criminal complaint. Bowers opened fire on the officers, shooting two more officers, critically wounding one. The remaining SWAT officers engaged in a multi-round gun battle while the two officers were carried out of the building. According to the federal criminal complaint, both were transported to UPMC centers for treatment.

During the gun battle, Bowers was wounded and subsequently taken into custody, where he made statements to SWAT Operator David Blahut, as recorded on the state criminal complaint. Among these statements were multiple remarks showing hostility toward people of the Jewish faith, including comments that Jewish people needed to die.

“They’re committing genocide to my people. I just want to kill Jews,” Bowers said, according to the federal affidavit.

A previous version of this story said criminal charges against Bowers were federal charges. This story has been updated to reflect this change. The Pitt News regrets this error.