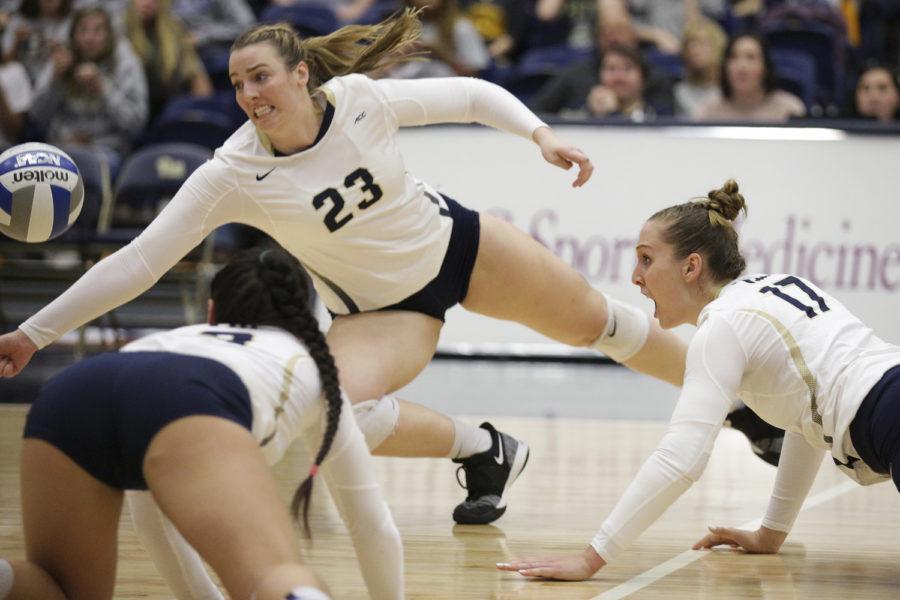 Pitt Volleyball lost its first match of the season, 3-1, this weekend to Duke.

By Kate Hall, For the Pitt News

While the football team found success Saturday, it was a tough Halloweekend for Pitt’s other sports. The previously undefeated women’s volleyball team saw its win streak snapped at 23, and the men’s soccer team dropped its third straight contest to end the regular season.

It took the No. 5 Panthers just three sets to cruise past the Wake Forest Demon Deacons Friday night, sweeping their ACC opponent on the road to move to 23-0 on the season and 11-0 in the conference.

Pitt comfortably won the first set 25-13, although the second proved to be much closer. With 11 ties and three lead changes, Pitt found itself trailing 19-15 late but ultimately used a finishing 10-3 run to squeak a 25-22 win. The third set was another tight one, with the Deacons trailing the Panthers by two points late in the set, 19-17. But with a 6-0 run, Pitt was able to come out victorious again and keep its win streak alive.

The Panthers stayed in North Carolina Sunday afternoon to continue their final stretch of ACC weekend games, this one against Duke. After four sets, Pitt’s undefeated streak was erased.

The Panthers got out to a promising start at Cameron Indoor Stadium, winning the first set 25-18. The second start was a rollercoaster, with Pitt coming back from an 18-12 deficit to take a 24-23 lead — just one point away from victory. But the Blue Devils rallied to win the last three points, tying the match up at one set apiece.

The third and fourth sets were both nail-biters as the lead bounced back and forth between teams. After the Blue Devils won the third set 25-23, the Panthers found themselves facing their first 2-1 deficit of the season.

In the fourth and final set, Pitt appeared to be in a position to tie up the match with a 21-20 lead. Instead, Duke rattled off five straight points to go up 24-20 — a point away from spoiling Pitt’s 23-match win streak. The Panthers fought for two more points, but a kill from Duke sophomore Payton Schwantz — her team-leading 17th of the match — ended the contest 3-1 in favor of the Blue Devils.

Duke had the advantage in hitting percentages with .316 to Pitt’s .250, while also out-killing the Panthers 64-60. Two Pitt players — Markovic and junior Layne Van Buskirk — recorded a career-high number of kills, with 18 each.

The team will travel to Georgia Tech next Friday and then Clemson Sunday before returning back home.

The Pitt men’s and women’s cross country teams both finished 13th out of 15 teams at the ACC Cross Country Championships at Boston’s Franklin Park on Friday. The women’s team earned 320 points in the 6k race, while the men’s team finished with 358 points in the 8k race.

Junior Sam Shields headlined the weekend, earning All-ACC Honors with her 16th-place finish in the meet. With a time of 20:54, Shields’ finish was the second-best performance by a Panther at the ACC Championships in history.

For the men’s team, junior Nick Wolk was the Panthers’ top finisher, coming in 47th place with a time of 24:43.

Both teams will travel to Penn State Nov. 9 for their next competition — the NCAA Mid-Atlantic Regional meet.

Due to inclement weather surrounding the area of Morgantown, West Virginia, Friday night, the Pitt versus West Virginia fall game was canceled, ending the Panthers’ fall season after two games.

These two teams will next get the chance to play their Backyard Brawl rivalry near the end of the spring regular season, scheduled for May 14 at PNC Park. As a team, Pitt baseball will stay out of action until the beginning of the regular season March 8.

Pitt men’s soccer closed out its regular season at home Saturday night with a 1-0 loss to No. 23 Notre Dame.

In the first half, Pitt managed to force five shots while also defending four from the Fighting Irish. Neither team was able to find the back of the net, so the teams headed into halftime in a scoreless tie.

The second half was a similar defensive stalemate, but Notre Dame began to create more opportunities, outshooting Pitt 6-3 in the second frame. A late penalty on the Panthers in the 85th minute gave the Irish a fighting chance. Notre Dame’s free kick soared into the middle of the box and senior midfielder Thomas Ueland got a foot on the ball to give the Irish their first goal of the game.

That proved to be the spoiler of Pitt’s senior night, as the Panthers were unable to generate any offense in the final moments of the match.

The Panthers ended their regular season with a 7-10-0 overall record and 2-6-0 record in the ACC. The team will travel to Charlottesville, Virginia, on Wednesday to take on the Virginia Cavaliers for the first round of  playoffs in the 2018 ACC Men’s Soccer Championship.