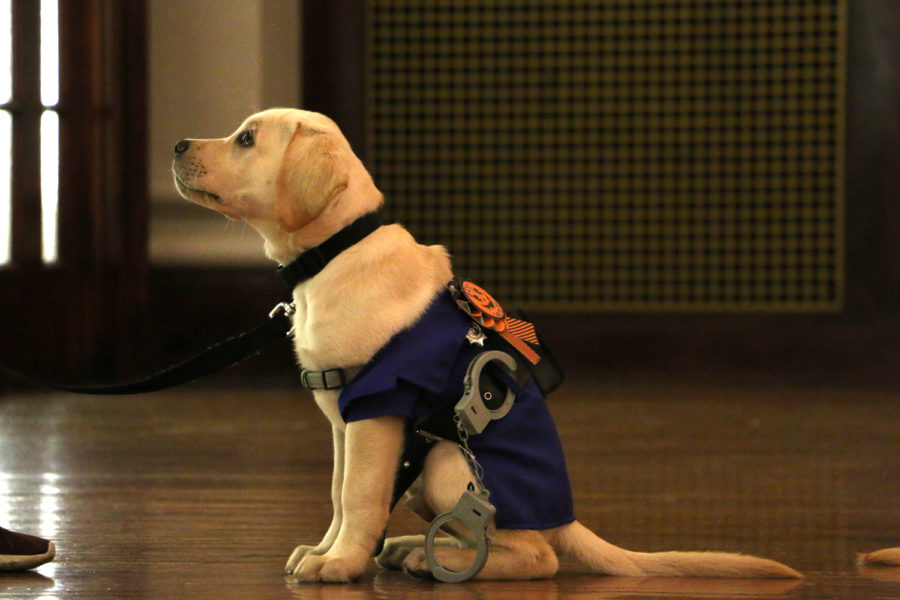 By Sarah Gross, For The Pitt News

Small yellow Lab puppies have graced the sidewalks of Pitt’s campus this semester, much to the pleasure of dog-loving students. This weekend, 10 of those service pups were given a temporary new job — modeling Halloween looks on the catwalk.

Perfect Fit Canine Campus Scholars hosted their first ever Puppy Halloween Fashion Show Saturday morning. This student organization meets once a week, and members dedicate their time to raise and train service dogs, as well as raise awareness about service animals. The proceeds for this event went towards food for the dogs.

The ballroom at Alumni Hall was packed with students and community members alike. While there were some delays due to the struggle of managing 10 dogs ranging in age from only a few months to a year-and-a-half old, the dogs were eventually all dressed to their best and on great behavior.

All the dogs arrived to the event with two costumes, and while most donned solo outfits, some wore coordinated group costumes, such as the the pair Luna and Mowgli going as a princess and a knight. Some trainers dressed up their dogs as their namesakes — for example, 8-month-old puppies Hunter and Duck were costumed as a hunter and as a duck, respectively.

Each dog walked down the center catwalk as nobly as they could, and while some tripped and scratched at their costumes, most were happy to strut alongside their trainers. Ellie LePard, an undecided sophomore who is raising one of the new puppies, Pongo, alongside her two roommates, spoke about the secret to his good behavior. Pongo came to the event dressed as a shark, then changed into his costume of a dog president, all while being an incredibly good boy.

“We all had treats in our hands,” LePard said. “We practiced so hard for [Pongo] to walk.”

There was one break for a costume change for all the dogs, during which PFCCS members  educated audience members on the club itself, as well as how to behave around service dogs and their trainers. Speakers discussed getting permission from trainers before taking pictures of service dogs to how to make sure to not distract a dog from their job.

“So [the show] was for fundraising, but it was also about education,” senior chemistry major Emma Oaks, the founder of PFCCS, said.

At the end of the show, a link to an online form was projected onto a backdrop screen for people to vote for the best-dressed dog. Audience members rushed to their phones to log on and select which dogs should win.

The winners were Mushu and Hunter, who had paired up to dress as a police officer and a prisoner, respectively.

PFCCS is a little over a year old, created by Oaks in October 2017. Members spend two years caring for their dogs and giving them proper training before the dogs find their perfect fit with someone who they can really help.

The club works alongside the local organization Perfect Fit Canines to care for puppies and train them, as well as focus on their strengths as they grow. The name “Perfect Fit” comes from PFC’s desire to pay attention to the skills and personality of each dog and match them with someone based on these, whether that be a blind individual or someone with autism.

The club has grown massively in size since it was created, and Oaks, who is the president of the club in addition to being the founder, attributes this to the attention that the dogs gather around campus. The club members bring the dogs they’re training to class, on the bus and all across campus. All of this garners a lot of attention, and in turn, leads to more involvement in the club and more people willing to help.

But as cute as the puppies are around campus and at the show, they are working dogs and will have incredibly important jobs once they complete training. Oaks’ partner Aiden is about a year-and-a-half old and was the original PFCCS dog. He is almost done with his training, and will move on to his full-time job this summer.

While Oaks preps Aiden on her own, other pairs still have a lot of work to do. Undecided sophomore Ashton Brown is the caregiver for one of the 8-month-old dogs, Duck.

“You have to be very responsible, you have to learn a lot of time management,” she said. “The dog comes first.”

This means even more work for anyone raising the youngest pups. While some more seasoned members are taking on the task by themselves, Pongo is being cared for and trained by a trio of roomates, the newest members of PFCCS.

Brooke Marshall is a sophomore biology major, working alongside LePard and their other roommate to help Pongo grow into a smart and successful service dog one day. Having the support of her roomates, she said, makes everything easier than it would have been to raise him alone. Marshall said everything isn’t always as cute and fun as it seems, and that so much care goes into these dogs that have such bright futures.

“It’s not having a puppy, it’s raising a service dog,” Marshall said.