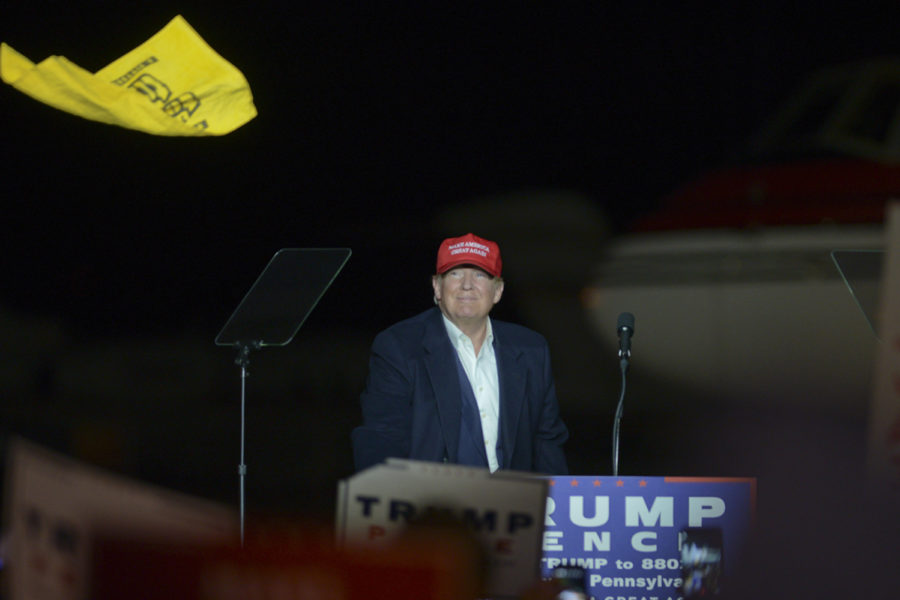 After stepping off of his plane at Pittsburgh International Airport, then-Republican presidential candidate Donald Trump waved a Terrible Towel and threw it into the crowd before his speech on Nov. 6, 2016.

Despite an open letter signed by more than 60,000 people telling President Donald Trump — in plain terms — that he is not welcome in Pittsburgh in the wake of the Tree of Life Synagogue massacre, the White House confirmed today the president and first lady plan to visit the Steel City on Tuesday.

White House Press Secretary Sarah Huckabee Sanders began the press conference by denouncing the act of violence that claimed the lives of 11 Jewish Americans in Pittsburgh.

The president’s flight is scheduled to land at Pittsburgh International Airport at 3:45 p.m. Details about where and when the president will speak in Pittsburgh have not yet been released.

[Trump’s response to the Tree of Life Synagogue massacre shifted through the weekend before the White House announced his plans to visit Pittsburgh.]

The rabbi at Tree of Life Synagogue told CNN reporters he welcomes the president.

In a statement to the Pittsburgh Post-Gazette, the Jewish Federation of Greater Pittsburgh acknowledged the controversy over Trump’s planned visit, saying the organization had to support all of Jewish Pittsburgh.

But others in Pittsburgh have already voiced their opposition to the president’s promise on Sunday to visit the City, which came hours after Trump suggested the incident wouldn’t have occurred if the synagogue had “armed guards,” and said at a campaign rally he considered cancelling the appearance due to a “bad hair day” rather than the Tree of Life incident.

“For the past three years your words and your policies have emboldened a growing white nationalist movement,” the open letter, written by the progressive Jewish organization Bend the Arc, read. “You yourself called the murderer evil, but yesterday’s violence is the direct culmination of your influence.”

The letter continued to list the Pittsburgh branch of Bend the Arc’s demands, including that Trump “fully denounce white nationalism,” “stop targeting and endangering all minorities,” “cease [his] assault on immigrants and refugees” and “commit [himself] to compassionate, democratic policies that recognize the dignity of all of us.”

[Thousands gathered to mourn the 11 victims of the hate crime in one of America’s most deeply rooted Jewish communities.]

Pittsburgh Mayor Bill Peduto, who voiced disagreement with the president’s proposal of arming guards in places of worship, told the Pittsburgh Post-Gazette he wants the White House to consult with the families of the victims before coming to Pittsburgh.

A group of Pittsburgh community members organized a protest of Trump’s visit, and by Monday night more than 4,200 people had marked themselves as interested on Facebook.

Trump tweeted on Monday about the “great anger in our Country,” saying the “Fake News Media” is to blame. Sanders also criticized the media in the press conference, saying media outlets wrongly blamed the president for the events in Pittsburgh.

He then tweeted about an “excellent call” with Jair Bolsonaro, the far-right populist who was elected president of Brazil Monday morning. Bolsonaro is known to be an open supporter of dictatorships and leverages hate speech against the LGBTQ+ community, women and people of color.