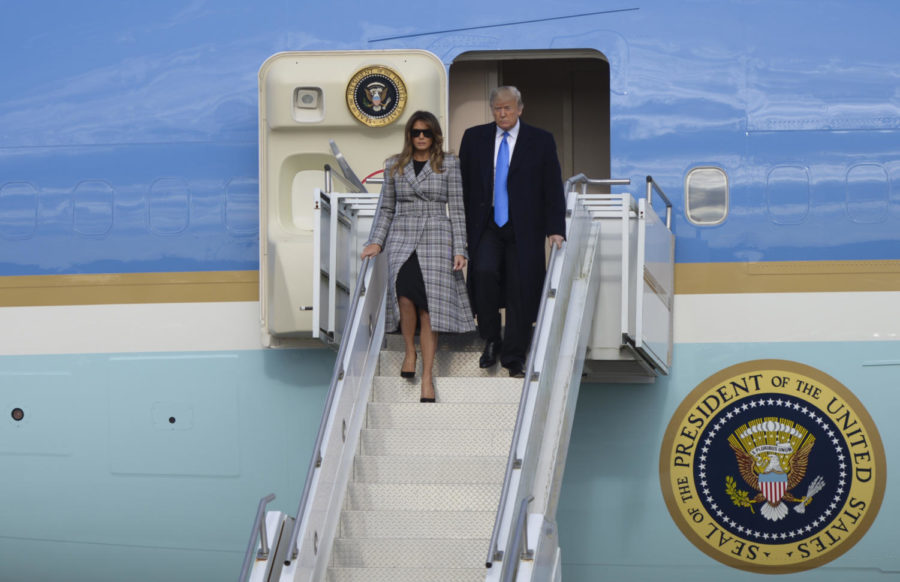 President Donald Trump and First Lady Melania Trump disembark from Air Force One in Coraopolis, Pa. around 4 p.m. on Tuesday.

By Janine Faust and Hannah Schneider

As Air Force One touched down at the Pittsburgh International Airport around 3:45 p.m. Tuesday, thousands of Pittsburghers gathered in Squirrel Hill to make their dissatisfaction with his visit known. But the two didn’t overlap — Trump made no public appearances in his time in Pittsburgh, and the main Squirrel Hill protest didn’t pass by Tree of Life Synagogue, the site of last Saturday’s massacre.

When White House Press Secretary Sarah Huckabee Sanders announced Trump’s intention to visit Pittsburgh, the administration did not produce an itinerary. The president did not speak to any media present and left by motorcade shortly before 4 p.m.

The president spoke on Fox News with Laura Ingraham on Monday night, telling the host he wanted to visit people injured in the attacks. Trump said he planned to visit UPMC Presbyterian in Oakland, where two police officers and two worshipers are recovering from injuries.

Funerals were held earlier on Tuesday for Dr. Jerry Rabinowitz and brothers Cecil and David Rosenthal, three of the 11 men and women killed in Saturday’s mass shooting. Funerals for the others victims will continue through Friday.

On Tuesday morning, Mayor Bill Peduto declined to meet with the president and asked him to hold off on visiting the City until after funeral services were over. A spokesperson of the mayor also said Peduto’s attention is solely focused on the grieving families affected by the shooting.

“All attention tomorrow should be on the victims,” Peduto said to local reporters outside the City-County Building Tuesday. “If the president is looking to come to Pittsburgh I would ask that he not do so while we are burying the dead. I would ask that White House staff contact the families and ask them if they want the President to be here.”

Members of the local progressive Jewish organization Bend the Arc wrote an open letter requesting the president stay out of the City unless he denounces white nationalism and stops “targeting and endangering all minorities,” which garnered more than 76,000 signatures by the time of his arrival.

Rabbi Jeffrey Myers, the rabbi who was leading the services when the shooting occurred at the Tree of Life on Saturday, was more accepting of Trump’s arrival.

“The president of the United States is always welcome,” Myers said to CNN Tuesday. “I’m a citizen. He’s my president. He is certainly welcome.”

President Trump and First Lady Melania Trump visited the Tree of Life synagogue at about 4:40 p.m. They were accompanied by Ivanka Trump, Kushner, Tree of Life Rabbi Myers and Israel ambassador to the United States Ron Dermer. Just a few blocks away were the more than 400 protesters gathered to protest his arrival, who held signs saying, “HATE is NOT welcome in Mr. Rogers’ Neighborhood” and “When leaders vilify, hatred ensures.” Protesters also chanted, “No more hate!”

Inside the synagogue, the party lit candles for each of the 11 victims. A makeshift memorial of white-painted Jewish stars with each victim’s name is outside the synagogue, where the Trumps placed white roses and a stone from the White House on each star, according to WDBO.

The Trumps visited UPMC Presbyterian at about 5:20 p.m., where two police officers and two worshipers are recovering from injuries sustained in the shooting. Upon arriving, they passed several hundred protesters on Fifth Avenue. Some held signs that read, “Stronger than hate,” and “It’s your fault.” At one point, many started chanting, “Trump go home.”

Sophomore marketing student Will Stein felt that Trump’s presence in the City was disrespectful.

“Most people, especially the Jewish community — I’m Jewish — asked him not to come and yet he still came,” Stein said. “I think it signifies that there’s not going to be a lot of change.”

The protests, along with the closure of De Soto Street by the Secret Service, held up several students and hospital workers from taking their usual route to their classes, workplaces or dorms. Emily Stephens, a first-year communication major, found herself having to walk farther down Fifth Avenue to find a route up to her dorm.

“I was trying to get back up to Sutherland and I was trying to come up the hill, and then the Secret Service stopped us and I had to go the whole way around Chevron to meet my roommate here because we wanted to go to the Pete for free shots — so I’m not here to see Donald Trump, because I’m very opposed to his presence,” she said.

Another group of students and some community members assembled on the outdoor steps at the Petersen Events Center to watch the Trumps’ entrance into the hospital. Pitt first-year student Stefan Bordeianu said while he supports Trump’s presence in the City, he thinks it may have been the wrong time for him to visit.

“I think it is really important to unify behind one leader and really show your support for our leadership, even though you may not agree with everything that he says,” Bordeianu said. “I think he’s coming maybe at the wrong time, but then again, the President’s a really busy guy, so if he can find time in his schedule, he should come to support his country whenever he can.”

Stephens felt similar to Bordeianu, as she expressed that the President’s visit disturbed the grieving period or the City.

“I understand presidential duties, but I also understand basic human needs,” Stephens said. “This City is in a time of mourning and the mayor of this City specifically asked to not have his presence, and as you can see, the City is very disrupted and focused on his presence, when it really should be focused on the topic at hand.”