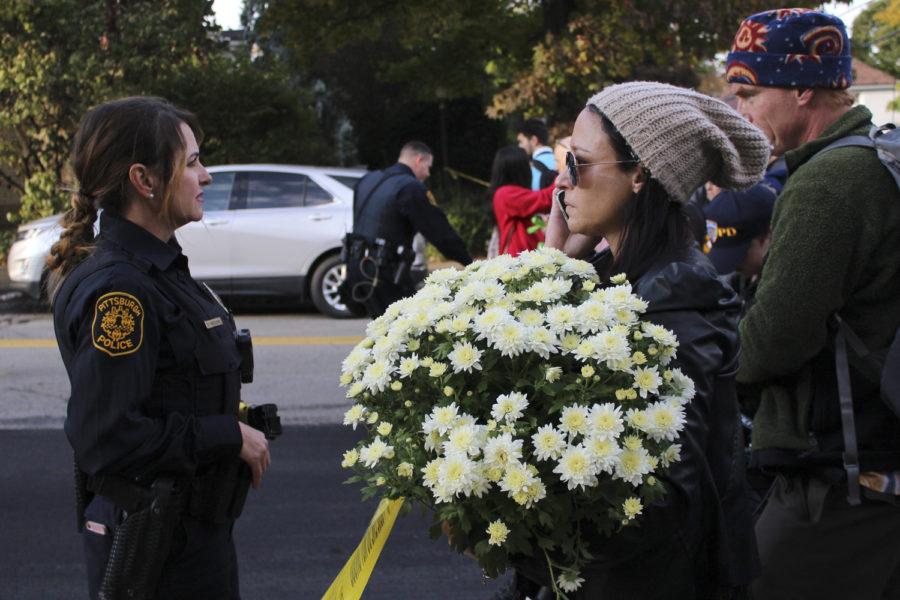 A protester stands across the taped-off crime scene at the Tree of Life Synagogue.

By Kieran McLean and Jon Kunitsky

Activism became part of Pittsburgh’s mourning process Tuesday, as more than a thousand people gathered in Squirrel Hill to protest the arrival of President Donald Trump.

In response to Saturday’s Tree of Life Synagogue massacre, activist groups in Pittsburgh organized multiple simultaneous gatherings around the City, which joined together in a peaceful march that ended late afternoon Tuesday in Squirrel Hill.

Attendees spoke out against the timing of President Trump’s visit, his sympathetic remarks toward neo-Nazi groups after the 2017 Unite the Right Charlottesville rally and his recent stoking of conspiracy theories about Jewish democratic mega-donor George Soros.

“It’s not the time for somebody to come into the community when the community has asked them not to come,” Squirrel Hill resident Barbara Zawadzki said.

Zawadzki knew shooting victims Irving Younger and Jerry Rabinowitz, and said that Trump’s administration has emboldened anti-Semitism that would have otherwise been sublimated.

“There’s always been an underground anti-Semitism in Pittsburgh,” Zawadzki said. “But the current administration has left the door open for people to surface, to be open about it.”

Protests began with a public shiva, or Jewish ritual of mourning, in Squirrel Hill following the funerals of shooting victims Rabinowitz, David Rosenthal and Cecil Rosenthal. Organizers from the Pittsburgh chapter of If Not Now, a Jewish group against Israel’s occupation of Palestine, led attendees in singing Hebrew songs and sharing food as part of the ceremony. As per Jewish tradition, shiva attendees were asked to wear black.

“I wanted to be part of the counterweight to the lack of response from the White House, and also to support my friends who are grieving,” Point Breeze resident Emily DeFerrari said as she handed out flowers to mourners.

If Not Now was joined by the Pittsburgh Democratic Socialists of America, Pittsburgh Coalition to End the Deadly Exchange and numerous local feminist and anarchist groups. All the groups’ organizers emphasized demilitarization and solidarity in the wake of the shooting.

“We want to process these feelings to allow us to act in a clear-minded way,” Ru Emmons, an If Not Now member from Pittsburgh’s North Side said. “We want more solidarity between immigrants’ rights groups, more accountability from our political leaders and we don’t want the state to take this as a sign to further militarize.”

Three blocks away, around 4 p.m., leaders from the Pittsburgh chapter of Bend the Arc —  a national, progressive Jewish group — read their now-viral open letter to the President in which they requested that he not come to Pittsburgh to another crowd.

Protesters held signs saying “Your Hate Speech Has Consequences” and “WORDS MATTER” as they nodded along to the letter. Children stood on their parents’ shoulders, elderly people sat in wheelchairs and people in attendance held messages of support that read, “Won’t you love thy neighbor,” “We do bridges not walls” and “We’re Still Squirrel Hill.”

After their separate events, the two groups marched into each other and merged to form a crowd of more than 1,000. Protest leaders with guitars led the group in renditions of Hebrew songs “Ozi v’Zimrat Yah Yah li lisha” and “Olam Chesed Yibaneh,” as they marched toward the Tree of Life Synagogue, where President Trump was visiting memorials to the victims.

“We will build this world with love,” protesters sang as they marched.

Demonstrators at the front of the march held a banner which read, “President Trump you are not welcome in Pittsburgh until you stop targeting and endangering all minorities.”

A police barricade stopped the protest one block away from the Tree of Life, while Trump paid his respects. Police vehicles later drove through the crowd during Trump’s departure, leading some protesters to shout at them.

“Turn your backs and keep marching,” organizers chanted in response.

Shortly after protesters arrived near Tree of Life, Trump left to visit the two police officers and two worshippers who are recovering from injuries at UPMC Presbyterian. But a separate protest group waited to meet his motorcade in Oakland.

Students lined the sidewalks of Fifth Avenue with signs to protest his arrival. As his entourage drove in, chants of “Go home Trump!” could be heard from the Petersen Events Center.

“He is definitely interrupting all of the funeral services,” junior computer engineering major Collin Abidi said of Trump’s visit as he watched the protests from the events center’s steps. “It’s just not appropriate.”

Trump left the hospital around 7 p.m., returned to Air Force One and flew back to Washington, D.C. But the aftermath of his visit lingers. For Zawadzki, whose family fled Stalin’s regime in Poland in 1961, Trump’s visit did little to heal the community’s wounds.

“People don’t think of him as the comforter-in-chief,” Zawadzki said. “He’s more like the divider-in-chief.”