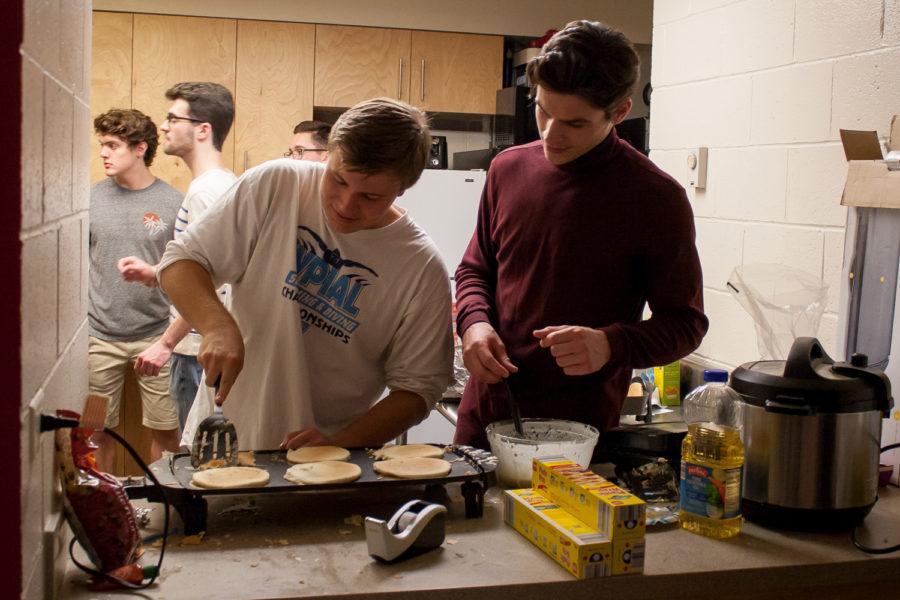 Members of Delta Chi make pancakes to raise money for the Tree of Life Synagogue.

Campus groups have each had their own reactions to the Tree of Life Synagogue tragedy last weekend. A group of historically Jewish Greek-life organizations has hosted a card-making event all week, while Student Government Board held a moment of silence during its Tuesday-night meeting.

Two of Pitt’s biggest social fraternities, Delta Chi and Sigma Alpha Mu, focused on the philanthropic side of their organizations to make their contributions.

The two frats organized a pancake-dinner fundraiser, in which all of the proceeds were sent to the Tree of Life Synagogue to help with restoration and funeral fees after the massacre that occurred there on Saturday. The event gained a large following on Facebook very quickly, with nearly 500 people marking themselves interested since the page was set up Sunday evening.

“Following everything [at Tree of Life], we knew that we wanted to do something to help,” Matthew Jankowitz, Delta Chi’s treasurer and a sophomore finance major, said. “We had done pancake nights for other philanthropy events in the past and we saw a lot of opportunities with a pancake night.”

Jankowitz shared that he is a part of Pittsburgh’s Jewish community and was proud that his fraternity brothers were just as determined to raise money for Tree of Life as he was.

“The main reason we’re out here is, of course, that we all really wanted to help Tree of Life in any way that we could. There are 11 funerals and Shiva services that unfortunately have to be paid for, along with restorations and everything,” he said.

The event began at 6 p.m. on Wednesday and by 6:25, the lounge of the on-campus fraternity house of Delta Chi was packed, and they had already raised more than $500 by charging guests $5 for entry. Students were coming in with groups of friends and staying for a while, lounging on couches and at the many tables set up. By the end of the event, the fraternities had raised $2,028 for Tree of Life from entry fees and donations.

“With the pancake night, we wanted to get something out fast and find a way to raise as much money as fast as possible,” Matthew Herman, Delta Chi’s philanthropy chair and a senior information science major, said. “[Jankowitz] talked about the funerals and Shiva services and we all felt passionate about helping Tree of Life with that.”

As more students filed in, the brothers of Delta Chi and Sigma Alpha Mu were cooking away in the kitchens. They began cooking Tuesday — starting with about 600 pancakes — and continued frying up cakes throughout Wednesday and while the event was underway. Altogether, the fraternities fried more than 1,000 pancakes.

However, the frat brothers had a small cooking weight taken off of their shoulders with food donations from local businesses. Pamela’s Diner donated about 130 extra pancakes and the Thirsty Scholar donated an abundance of pasta with meatballs — perfect for the meat-lovers ready for a heartier meal than pancakes.

Jankowitz and Herman were grateful for the food donations and equally thankful for the large turnout and massive engagement on Facebook.

“Usually when we host a Greek event, other Greek [organizations] will respond — we’ve never gotten this kind of a response before,” Jankowitz said. “I think people really see the community behind this and that it’s something that really needed to happen. Our friends shared the event and we were lucky to get a lot of support.”

One student of many that was happy to offer support was Seth Appel, a senior civil engineering major. Appel sat at a back table with a group of friends, joking and enjoying the pasta and pancakes.

“This is a really cool thing for me,” Appel said. “I’m involved in a Jewish fraternity on campus, so it’s really nice to see other fraternities that are outside the community come in and really support us and to see so many students here. It shows the strength of the Pittsburgh community as a whole.”

The feeling of community was an extremely important thing to Jankowitz, who said it’s necessary in times like these.

“[Pancake night] really gives the community a time to come together and just be together,” Jankowitz said.

The sense of a unified Pittsburgh community has not been lacking this week, with the many memorials, marches and vigils all over Pittsburgh. But Jankowitz believed that simply being together and sharing peaceful moments is just as important.

“I think protests and memorial services and stuff like that is all so beautiful and I think it’s great that they’re happening,” he said. “But I think there also has to be time when people can come together on campus and be friends — Jewish or not Jewish, from Pittsburgh or not — just to come together and feel the wonderful community here. That’s another thing we wanted to do here.”