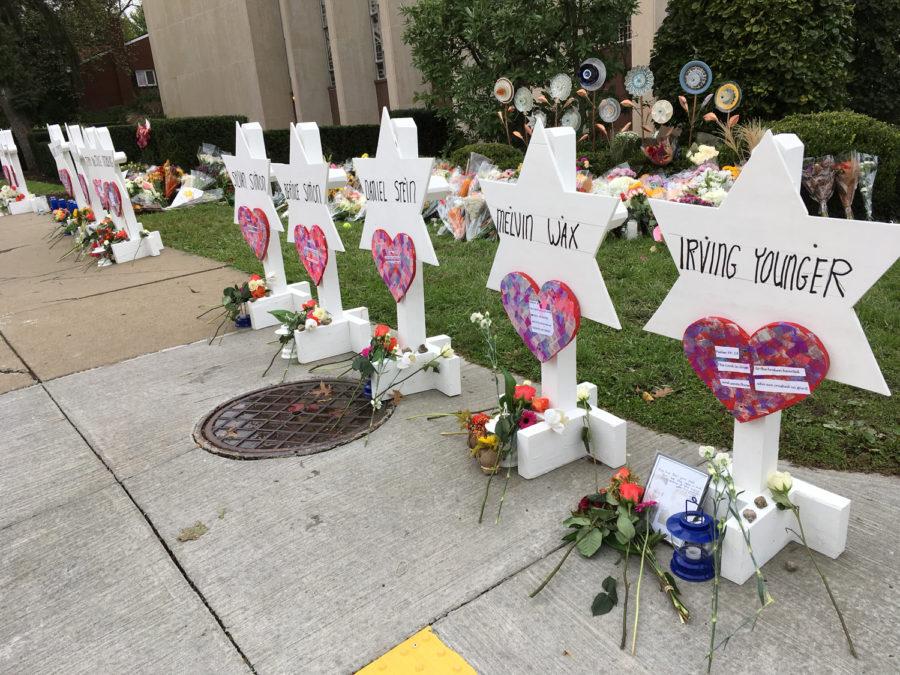 Wooden figures in the shape of the Star of David stand are decorated with flowers, hearts and the name of each victim in the Tree of Life shooting outside the synagogue.

Joyce Feinberg, 75, of Oakland worked as a researcher at the University of Pittsburgh Learning Research and Development Center from 1983 to 2008. Born in Canada, Feinberg graduated from University of Toronto with a bachelor’s in social psychology before relocating to Pittsburgh.

“[She] seemed to make people feel at ease when they interacted,” Perfetti said.

Richard Gottfried, 65, of Ross Township grew up about an hour south of Pittsburgh in Uniontown. He graduated from the University of Pittsburgh’s dental school in 1980, the same year he married Margaret “Peg” Durachko Gottfried. The couple met while both attending dental school at Pitt. The Gottfrieds opened a dental practice together in 1984 that remained in operation for 34 years.

“He was very religious,” Kalson told Time. “Once I realized what was going on and heard he had not been heard from, I was not at all surprised. He was really devoted to his congregation.”

Gottfried was the president of New Light Congregation, one of the three Jewish congregations that operate through Tree of Life Synagogue, and attended services regularly.

A service for Dr. Gottfried was held Thursday afternoon at Ralph Schugar Chapel on Centre Avenue. Contributions may be made to New Light Congregation, 5898 Wilkins Ave., Pittsburgh, PA, 15217.

Rose Mallinger, 97, of Squirrel Hill hardly ever missed a day of service — from volunteering to preparing breakfast for her fellow congregants.

Rose didn’t let her age define her, as she made it her goal to stay witty, humorful and intelligent. She was the mother of three, with five grandchildren, and one great-grandchild. Rose attended Tree of Life regularly with her daughter Andrea, who was wounded during the shooting.

A service for Mallinger will begin Friday at 1 p.m. at Rodef Shalom Temple on Fifth Avenue. Visitation will begin at 11 a.m. Contributions can be made to the Rose Mallinger Memorial Fund, c/o Tree of Life Synagogue, 5898 Wilkins Ave., Pittsburgh, PA. 15217 or through the official Gofundme page.

Dr. Jerry Rabinowitz, 66, of Edgewood, worked as a family physician.

“He wore bow ties, that’s what I remember most about him,” Sean Bailey said in a Facebook post. Bailey is a student at Pitt, third generation patient of the doctor and member of the Squirrel Hill community. When given a school uniform, Bailey adopted bow ties into his own wardrobe, and the two bonded over the accessory.

Rabinowitz treated Michael Kerr for a total of 25 years, according to The New York Times. Kerr was diagnosed with HIV during the height of the HIV crisis. He remembers the doctor’s tireless commitment to his life and well being even before there was treatment for the illness.

“He had my back, but I know he had everyone’s backs,” Mr. Kerr said.

A funeral for Rabinowitz was held Tuesday morning at the Jewish Community Center on Forbes Avenue. Donations can be made in his memory to Dor Hadash located at 5898 Wilkins Ave. Pittsburgh, PA, 15217.

The two brothers were constantly by each other’s side, looking out for one another, according to CNN. David, 54, worked for Goodwill Industries and Cecil, 59, was a greeter at the Synagogue, who was going to begin working in a family-owned business, according to NPR.

Both Squirrel Hill residents were kind and gentle spirits, according to Chris Schopf, vice president for residential support at Achieva. A funeral service was held for the brothers on Tuesday at Rodef Shalom Temple. Contributions in the Rosenthals’ memory can be made to Tree of Life * Or L’Simcha Congregation, 5898 Wilkins Ave., Pittsburgh, PA 15217, or Achieva, 711 Bingham St., Pittsburgh, PA, 15203.

The Simons wed more than 60 years ago at the Tree of Life synagogue. The Pittsburgh Post-Gazette printed their wedding announcement in 1956.

Bernice, 84, and Sylvan, 86, lived in Wilkinsburg together doing their part to help and give back to their small neighborhood and the Jewish community.

Both Simons’ funerals were held Thursday at Ralph Schugar Chapel on Center Avenue.

Daniel Stein, 71, of Squirrel Hill was a man of the community, according to the Pittsburgh Post-Gazette. He organized congregations and coached little league baseball. He spent a lot of his time with New Light Congregation — where he held numerous leadership roles over the years.

Stein was always present and made an effort to be someone people could turn to in times of need. He wanted to help in anyway he could without receiving any recognition. Services for Stein will be private. Contributions in Stein’s memory may be made to the Crohn’s and Colitis Foundation or the Squirrel Hill Food Pantry.

Melvin Wax, 87, of Squirrel Hill attended shabbat services regularly. He was leading a service in the basement of Tree of Life at the time of his death. Rabbi Jonathan Perlman described Wax as perpetually happy and always charitable.

Wax was a graduate of Allderdice High School. In the weeks leading up to his death, he had been working to register voters in Squirrel Hill and help others his age navigate the voting process.

A service was held Wednesday at Ralph Schugar Chapel on Centre Avenue. Contributions in memory of Wax can be made to New Light Congregation, 5898 Wilkins Ave., Pittsburgh, PA, 15217.

Irving Younger, 69, of Mount Washington volunteered at Tree of Light as an usher, welcoming all who attended services with a warm smile. Neighbors recall Younger regularly walking along Murray Avenue, speaking with anyone he passed along the way.

Ari Letwin, a Squirrel Hill native who attended Younger’s funeral commented that until recently he had believed Younger was a resident of Squirrel Hill because of all the time he spent there.

“He really cared for everybody. And was just the sweetest man. Always smiling, always willing to help,” Letwin said.

Younger’s wife passed away 10 years ago, but he is survived by his two children and a grandson. A service for Younger was held Wednesday at Rodef Shalom Temple on Fifth Avenue.