What are the odds: Rodgers vs. Brady could be the showdown of the season 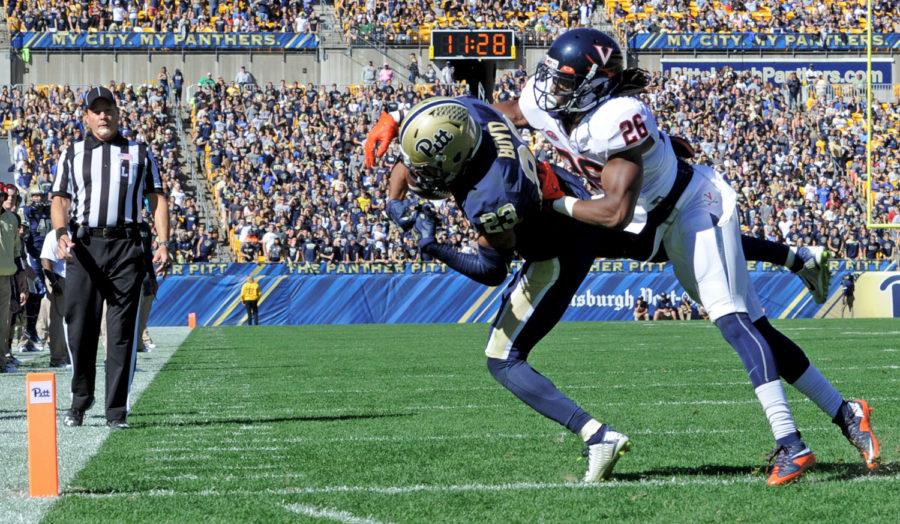 Pitt's then-wide receiver Tyler Boyd pulls in a pass for an 8-yard touchdown as he's defended by Virginia's Maurice Canady in the third quarter on Oct. 10, 2015, at Heinz Field. Pitt won, 26-19.

There’s nothing better than a weekend in Pittsburgh after both Pitt and the Steelers win. It puts the City in a better mood, despite the poor weather that took place during the Pitt game on Saturday. On top of both local teams winning, I went 4-2 in my picks from last week, bringing the season record to 22-20.

This Sunday features two big-time matchups in the NFL. First, an AFC North division battle between the Pittsburgh Steelers and Baltimore Ravens, followed by a primetime matchup between the two best quarterbacks in football — Aaron Rodgers and the Green Bay Packers against Tom Brady and the New England Patriots. You can expect a defensive fight in the Pittsburgh and Baltimore game — while the Packers and Patriots game should be more of an offensive shootout. It’s time to buckle your chinstrap and see what games you should bet on this weekend. 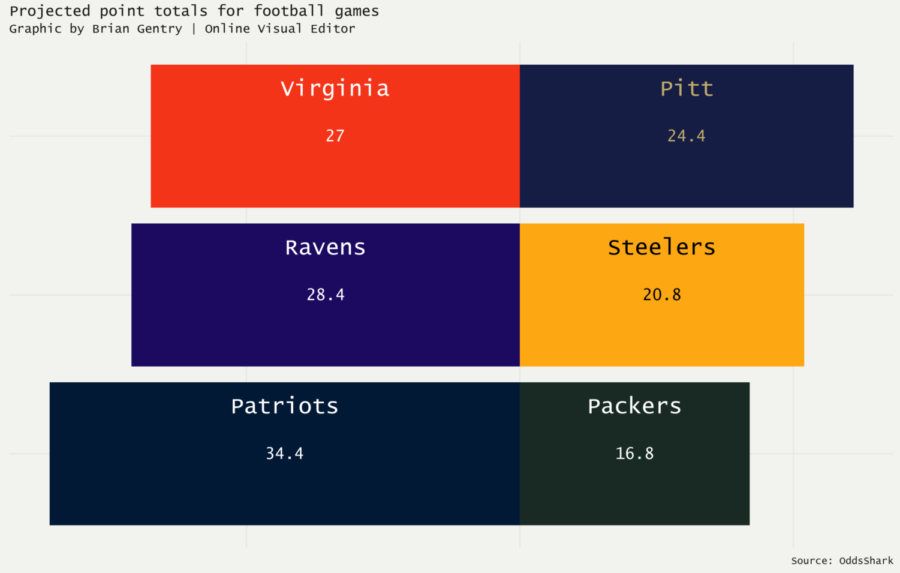 Analysis: A Friday night matchup between two of the top teams in the ACC Coastal division could be one of the biggest games thus far in the season. Virginia is riding high after their fourth straight ACC win, earning them a top 25 for the first time since November 2011. Led by junior quarterback Bryce Perkins, the Cavaliers have had tremendous success on offense this season. Perkins is coming off of a 217-yard passing and 112-yard rushing performance in Virginia’s win against North Carolina. It was the third time this year that Perkins has rushed for over 100 yards, previously doing so against Richmond and Indiana. His legs aren’t everything he has though — the junior has thrown for 1,623 yards, including 18 touchdowns. Senior wide receiver Olamide Zaccheaus has been dominant on offense — he’s caught six touchdowns along with 690 yards through eight games this season. The Pitt defense may have some trouble facing Perkins, Zacchaeus and the rest of the Cavalier offense.

But the Pittsburgh Panthers are feeling pretty good about themselves after a 54-45 shootout win over Duke last Saturday. First-year running back V’Lique Carter made his Panthers debut and boy, was it a big one. The young star had 137 yards and two touchdowns on only seven carries in the team’s win. Between Carter’s performance and senior running back Qadree Ollison’s 149 yards plus a touchdown, Pitt’s offense came to life against the Blue Devils. If the duo can replicate that on Friday night, the Cavalier fans are going to be very upset. Both teams only have one loss in conference play, so the winner of this game will take a lead in the division standings and become one step closer to playing for the ACC Championship in December.

Bet: Take Pitt to cover the spread and the over.

Analysis: No Le’Veon Bell? That’s no problem for the Pittsburgh Steelers and starting running back James Conner. The second-year running back out of Pitt has been playing at a Pro Bowl level — some would even say he is playing better than Bell did last season. Conner has nearly 600 yards and nine touchdowns on the ground so far this season, not to mention 323 yards receiving. Conner is on pace to have more rushing yards and touchdowns than Bell did last year. He’s already tied the amount of rushing touchdowns Bell had, but in eight fewer games played. I think the Steelers and Le’Veon Bell are a celebrity couple that is very clearly broken up, but they just haven’t released a statement yet. Conner doesn’t seem to mind and should continue his strong season in this AFC North battle.

The Baltimore Ravens aren’t great, but they also aren’t bad. It seems as if everyone has been saying the same thing about the Ravens for years. They’re a tough defensive team with an offense that is led by a Super Bowl winning quarterback, Joe Flacco. Flacco sometimes plays like he’s elite, but at other times, he plays like he should be a backup — that’s why the team traded up in to the first round of last year’s NFL Draft to select former Heisman-winning quarterback Lamar Jackson. However, Jackson has barely played at all. Last week, in the Raven’s loss to the Carolina Panthers, Jackson was 4-5 passing for 46 yards and a touchdown. It was the first score of his career, having previously only completed one pass in his career on two attempts. Flacco and possibly Jackson need to beat Pittsburgh this week at home if they want to win the AFC North.

Bet: The Steelers should cover the spread and bet the over.

Analysis: Arguably the two best quarterbacks of all time will face off against each other on Sunday Night Football in Foxborough, Massachusetts. Five-time Super Bowl champion Tom Brady and his New England Patriots take on one-time Super Bowl champion Aaron Rodgers and the Green Bay Packers. Last week, it looked like the Packers were going to end the Los Angeles Rams’ undefeated season, until running back Ty Montgomery fumbled a kickoff, giving the Rams the ball and basically ending the game. Rodgers finished with 286 yards passing and one touchdown in the loss. Montgomery is now a member of the Baltimore Ravens after being traded for a 2020 seventh round pick (which is basically nothing). The Packers did find their run offense against the Rams’ top-ranked defense — running back Aaron Jones had 86 yards and a touchdown. Look for Jones to run the ball well and more frequently this week against New England. Aaron Rodgers could accomplish nothing for the rest of his career and still go down as an all-time great, but he wants to win —  especially against Tom Brady.

During a radio interview on WEEI in Boston on Tuesday, Oct. 30, Brady was asked who he thought was the best passer of all time. Most fans would usually say either Brady or Rodgers. Brady said that question was hard to answer. “But I think Aaron’s one of the best ever to play the game. He’s got every skill you need to be a great quarterback,” he continued. A safe answer by the former MVP, but it is really cool to see that even Brady admires Rodgers. Now it’s time for his Patriots team to go out and win another home game, where the team is 4-0 this year. Running back James White has been New England’s go-to guy this season as a receiver. White, the Super Bowl LI hero, has 55 receptions to go along with 459 yards and six touchdowns this year. His speed and ability to change direction makes him one of the most difficult guys to tackle in the NFL — and to think he was third string at the University of Wisconsin. If Brady can continue to find White, the Packers could be in for a long day.

Bet: Take the Packers to cover and bet the over.